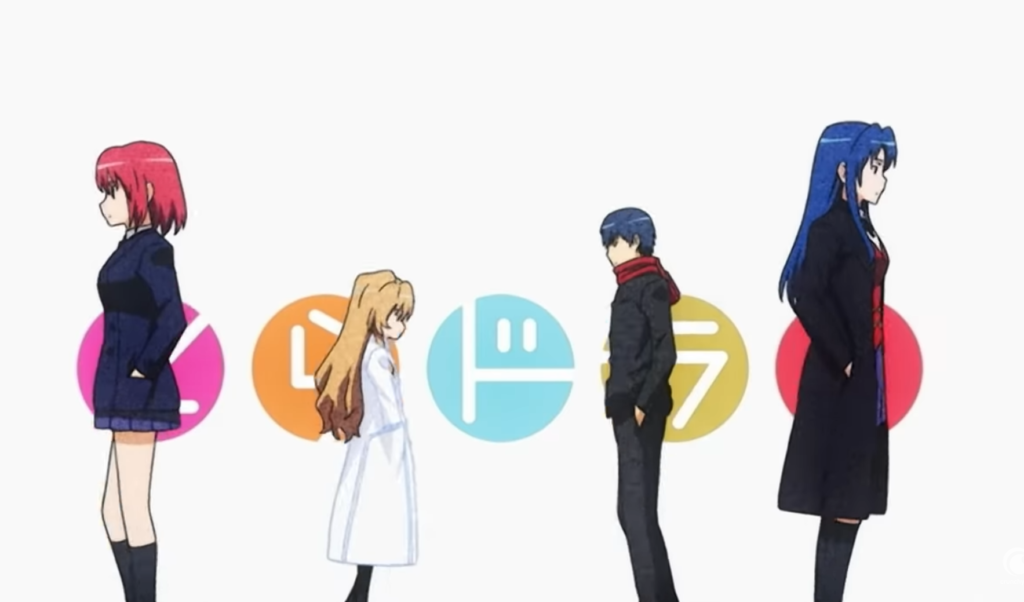 Toradora and the Romance of the Three Queendoms

14 February. Usually either a day full of cream soda flavored anticipation or a sour grape sting on your tongue, depending on whether you’ve got a date or not. With the great equalizer called Covid-19 still running amok, we’ll all be staying in our confines this year regardless of relationship status. Ruminating in our rooms sure has us contemplating the nature of Romance, what with not being able to go out and experience it. Anime has long been an avenue for creators to the subject and for viewers to partake in some facsimile of it, and what better facsimile exists than Toradora? Remaining to this day one of the two best romance anime ever (the other being His Or Her Circumstances of course) the show’s genius comes in how it offers not a lense into just one couple, but three distinct kinds of love that elaborate on romance as a spectrum.

Taiga Aisaka and the Romance of Absolute Solidarity

The entire basis of Taiga and Ryuji’s dynamic stems from their steadfast and meticulous support of one another in romantic and eventually daily conquests. You could even use the word ‘partnership’ over ‘relationship’ to describe what the two of them have. These two initially end up signing their verbal contract to help each other date each other’s best friends in the first episode when, because it’s anime, they realize they live right next to each other! And exactly because it’s anime, you know exactly how the show will end after the first episode. Still, the evolution of Ryuji and Taiga’s relationship makes for some captivating television! No shoujo-esque eye contact followed by blushing here. The two routinely advise and nurture each other until they almost naturally become two halves of the same whole, building unshakable trust and compensating for each other’s weaknesses as they go.

Minori ‘Minorin’ Chihara and the Romance of Pure Adoration

Spoilers: The word adoration has more than one meaning. Ryuji absolutely adores the head-in-the-clouds but always resolute Minori Chihara, more commonly referred to as ‘Minorin’ by her best friend Taiga, who’s secretly trying to set the two up. In simple terms, Ryuji has an active crush on Minorin; she gives his heart goose-pumps. In other words, adoration. Why that happens, though, could be more accurately described by the other meaning of ‘adoration’. See, Minorin with her optimistic disposition, her ability to cheer up those around her, and her unshakeable straightforwardness, she’s everything Ryuji isn’t. Perhaps subconsciously so, but he wishes he could be more like his crush that he puts up on a pedestal. That arguably makes for the basis of their romance, though she too finds his devotion to Taiga more than admirable. What the two don’t have, however, is a wealth of experiences bringing them together, despite Taiga’s best efforts.

Ami Kawashima and the Romance of Unconditional Acceptance

Best efforts don’t guarantee you a fairy-tail ending though, as Ami Kawashima knows too well. With extreme beauty, extreme arrogance, and a materialist understanding of the world, we’re not sure what anybody else would ever want in a partner! Canonically, Ryuji doesn’t so much as bat an eye at Ami’s repeated hinting at wanting more from him. However, Ryuji’s already given her the one thing you could want from a partner: undiluted acceptance of her true self, not to get too Persona 4 over here. Her daily life includes Ami dumbing herself down to get on with her classmates, despite her being matured pretty early through modeling work and the stalkers that come with it. Ryuji instantly sees through her act. Not only that, but beneath her airhead act she’s quite nasty, always telling it like it is with her sharp tongue and then adding some insult to injury for good measure. In Ami’s world, people always compliment her for being so nice and mature; Ryuji, however, tells her it’s okay to be a raging pain in the ass and understands that she’s still just a kid at heart. In return, Kawashima consoles him despite his lack of attraction, often adding a perspective that only someone who sees the bigger picture can. Once again, unconditional acceptance.

Toradora meditates on three different kinds of romance that all ring true in their respective lanes. Sure, the show has a canonical ending since Ryuji decides to wife one of these girls, but with the onus of about three quarters of the experience being these individual relationships opposed to a ‘true romance arc’, they’re all quite captivating. Questioning where the line between friendship ends and romance begins, Toradora offers a one-of-a-kind look at The Feelings Spectrum most anime don’t care to indulge in. After all, you can’t sell figures of a girl if she isn’t inextricably in love with the main character all the time, right???

If you haven’t, you can watch Toradora and its romance on Crunchyroll.