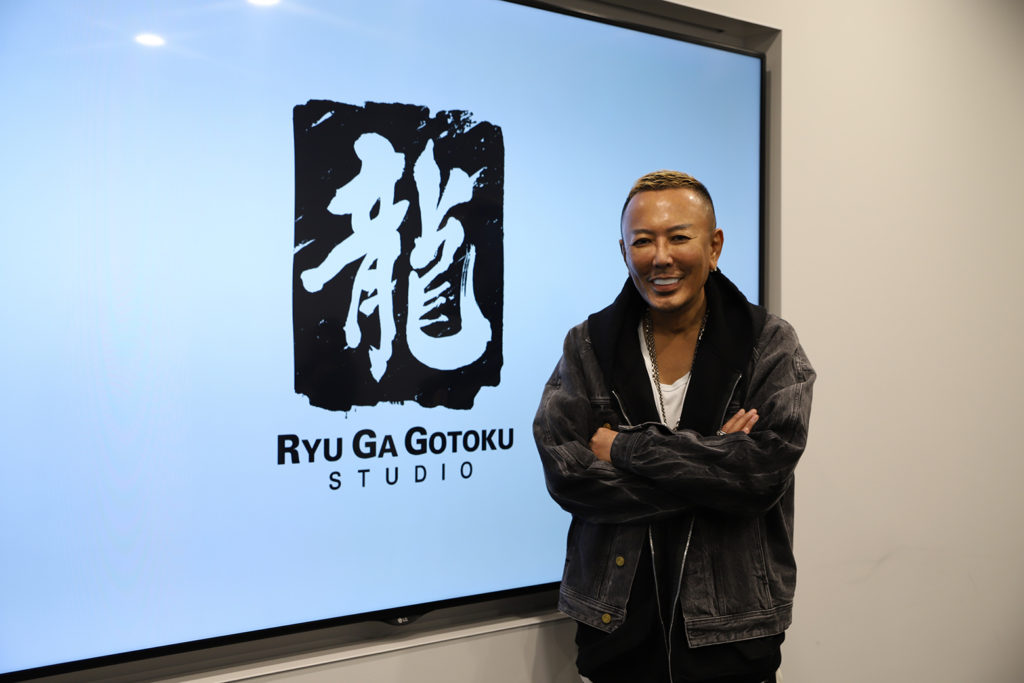 Within the video game industry, there are few creators who have left as much of an impact as SEGA’s own Toshihiro Nagoshi. He’s the architect behind some of the last several decades most creative hits, including arcade-staple Daytona USA, Super Monkey Ball, Yakuza, and most recently, Judgment. We had the unique opportunity to sit down with the man himself, just days before the release of Judgment in Japan, to ask him a few questions about his extensive history with SEGA, as well as his life outside of the job.

Conducting the interview was Sekai of EXILE and FANTASTICS, a multi-talented performer who also doubles as a massive video game fanatic and overall otaku. Building on top of this, SEKAI has long been a fan of Toshihiro Nagoshi’s works. Going into the interview, we prepped Sekai with a handful of questions that he mixed in with his own, ultimately bringing us a unique blend of domestic and globalized questions that we hope delivers an in-depth look at the worlds view on Nagoshi.

With a focus on Toshihiro Nagoshi’s current life at SEGA, the titles that would eventually shape his career, and the world of his latest title Judgment, the second part to our interview can be read below:

Nagoshi: Another thing I was very lucky with when joining SEGA was that I could experience working on numerous genres. I’m really thankful I was able to experience things such as racing, fighting, puzzle, flight simulation, and action. Within this industry, there’s a whole lot of companies and a whole lot of teams. When you ask someone who has already been with the same company for twenty or more years, it’s not surprising when they tell you they’ve only worked on one genre.

When I first started working on Yakuza, I received criticism left and right that these things weren’t necessary for video games. People constantly questioned who was calling the shots on these choices, but the more people that questioned me, the more I felt there was something wrong.

The more criticism I received, the more I felt a flame ignite in me to show that these traits could inspire people to play games. This eventually led to me making video games on a much more grand scale. I like making naysayers eat their own words. That’s just the kind of person I am.

Sekai: I would love to play that.

Nagoshi: I’d like to hope you’ll play it if it ever comes out.

Nagoshi: Within the world of Yakuza, there are two major elements. The first one is the main character, Kazuma Kiryu, and the second is the locale of Kamurocho. Of course, depending on which entry you’re playing, it can take place in other cities. Other sub-characters might appear too, but those two elements are always there.

We’ve expanded the story of Yakuza in a number of ways and we’ve brought it to numerous generations of consoles but even still, there are limitations to what Kazuma Kiryu can do or say. Within the game, there are a number of mini-games that aren’t part of the actual story that’ll see Kiryu go to places like a hostess club and karaoke.

But when it comes to the main story, there is a limit to how far we can take his character. Even Kiryu has his limits. But on the other hand, we’ve had 10 years to develop the city of Kamurocho. If we think only of the element that is Kamurocho, there’s so much left to provide.

Because of the limits of Yakuza provided by Kazuma Kiryu’s character, we found ourselves wasting the element of Kamurocho. We were hoping we could use it in a different way, and believed that we should eventually be able to prove that.

We were hoping to use it to its full potential eventually, but when we decided to end the story of Kazuma Kiryu in Yakuza 6, we knew it was the time. That’s when we took the chance to write the scenario and work hard on the story and settings so players could fully experience Kamurocho beyond Yakuza. That is where Judgment comes into the picture.

Sekai: Takuya Kimura plays the role of Judgment’s main character, Yagami, and can be seen pretty early on dressed like a homeless man. I remember when I first saw that, I thought that if this was Kazuma Kiryu I would have been quite surprised.

Nagoshi: I think we were shocked enough to be working with Takuya Kimura.

Sekai: Rather than shocked, I clearly remember thinking that this was something new for a main character.

Nagoshi: We had a similar issue when we started working on the character of Kazuma Kiryu but when we took into consideration that we had cast Takuya Kimura for the role of Yagami we were definitely concerned. It was really interesting though, we had so many twists and turns along the way. Takuya Kimura really is so cool.

I remember thinking “Oh my god, he’s so cool!”, but if I take that into consideration too much, people might say we were being favorable. We also didn’t want people to think that the same team who made Yakuza had gone soft. We had so many arguments like “We want to do this, but Mr. Kimura might get mad” or “After having come this far, it’s all about him getting mad.”

In the end, we made sure to get approval from his agency for everything. It went a lot smoother than expected. I think a lot of the people involved, including Takuya Kimura, like trying new things. They kept looking for requests and wanted to try a lot of different things. Beat Takeshi was actually the same. Even at his age, when we’d nervously ask him, “If you’re okay with it, how about doing this?” and he’d say “Sounds good. Let’s do it,” leaving us to question “Are you sure about that?”

It’s always like this when we work with people invested in their own character. When they have a feeling that there’s something to gain after the challenge, they’re usually very open to our requests. Maybe it’s like this because it’s a video game. Maybe that’s just another benefit of the medium.

If people begin to say that video games are a medium that is aggressive towards celebrities and their characters, it means we’ve done a worthwhile job and that we need to continue being this aggressive.

Moving forward, in both Yakuza and Judgment we see the representation of a lot of real-world brands such as JOYSOUND in the games. Did you have any difficulties getting these brands involved in such a series?

Nagoshi: It was all done one agreement at a time, but it definitely took a long time. With that being said, in the first Yakuza game, we were able to do a tie-in with Don Quijote. That was definitely a big one for us. We couldn’t get the approval for a lot of the places we approached, let alone the music. They couldn’t understand why we wanted to include them in the game. “Why do you need this?”

But it was around that time a decade ago that I was set on making all the in-game signs representative of real brands. It was because, with each fake branded sign, it became more apparent that you were in a fake world. I said that if we were going to do one real brand, I wanted to do them all.

We peaked in that sense with Yakuza 5 where we worked with some 150 companies. I haven’t confirmed it, but that’s probably eligible for some kind of Guinness World Record.

Sekai: I’ve got no doubts you would be.

Nagoshi: So after bringing on that many brands, walking into the city truly made Kamurocho feel like a place that actually exists. It might only be a small effect, but when you have that many of them, it truly makes you appreciate how incredible the reality is.

Sekai: Yeah, it really was something else.

Nagoshi: As the number of real brand signage gradually increased, so did the reality of the city. Even though we couldn’t make it happen in the early days, it definitely made me happy to see the growth.

Sekai: I remember playing through the original three games, noticing with each new entry that more signs were appearing. There was even a point where I wanted to live in Kamurocho, I really thought I wanted to go to this city. I was still in high school back then but playing it in my 20s really shined a new light on the city. Now I’d love to go somewhere in-game like Shangri-La, but that can’t really be helped.

Nagoshi: It was genuinely difficult to score some of these tie-ups with companies. No matter how hard we pushed, we just kept getting rejected. I can’t name which company, but there was one that told us “If we need something, we’ll contact you” before kicking us out. We quickly decided that we weren’t going back there any time soon.

It was a few years later though, about 5 years into the series, that I gave a presentation to the PR team at that same company. I was used to these presentations at this point, but when I went back there and they told me: “We’re big fans of the game. We’d love to work together!” That was when I realized for the first time that the Yakuza series was getting popular.

We already knew all the sales numbers were good which is why we were able to approach them but when they told us that, I really did have that first realization of the game’s popularity. For it to change from “If we need you, we’ll contact you.” to “We’re big fans of the game.” I was so happy that I almost cried. I’m so glad we kept pushing.

Sekai: So now they want to work with you?

Nagoshi: Yes, and I couldn’t be happier

With a clear passion for his work and the drive to back it, Toshihiro Nagoshi proves time and time again that there’s always light at the end of the tunnel. Proudly boasting almost 30 years in the video game industry, his work is unrivaled amongst fellow creatives and is every bit deserving of the success it’s been receiving over these past few years not just in Japan, but internationally as well. In the third part of our interview, we delve into Yakuza’s long history in the West, and how it went from obscurity to fame through years of trial and error.