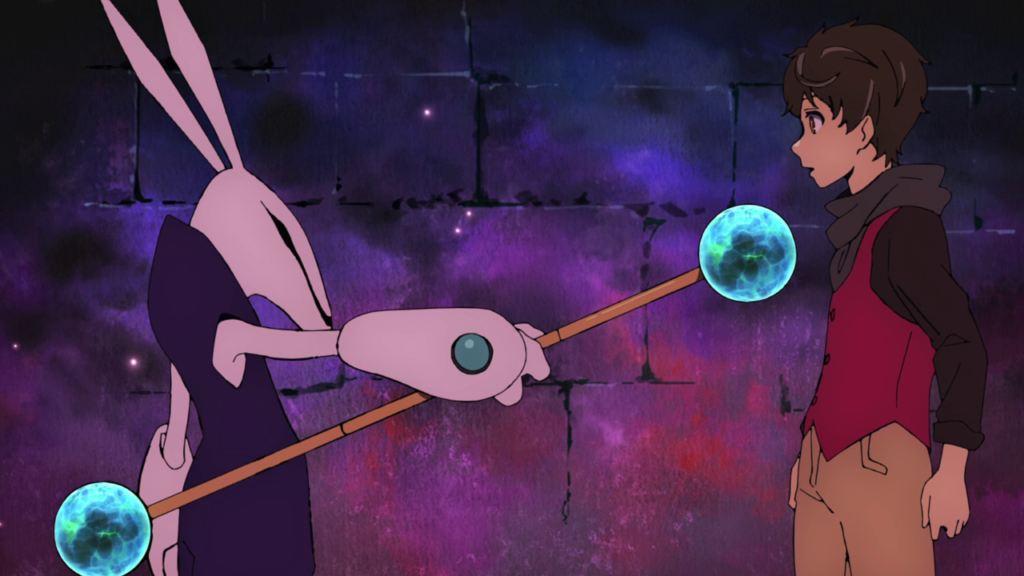 The adventure begins in Tower of God episode 1 as Bam takes on his first test, a near-impossible ball-based task set by the conniving Headon. He’ll get help along the way from Yuri and Evan, before passing on to the second floor to face his toughest challenge yet. Will he be able to survive? Will he ever be reunited with Rachel? What awaits him at the top?

In terms of adaptation, this episode covers chapters 0 through 5 of the original manhwa by SIU, ending partway through chapter 6. The anime necessarily cuts a large amount of content, as we shall see, but also seeks to add in a few extra elements of its own. Although reception to the episode has been mixed, it seems clear to me that the anime is taking all the steps in the right direction to ensure that this first season – however long it ends up being – is the best that it can possibly be.

The beginning is always the hardest part of any anime, and Tower of God is no exception. In just 24 minutes, you need to convince the viewer that this particular show is going to be worth their time, entertain them and set up all of the necessary pieces for the continued future of the story. As a result, for some this episode just didn’t work – and no amount of saying ‘it gets better’ can change that.

To make matters worse, the unique nature of the source material made crafting a compelling opening episode that much harder for the team over at Telecom Animation Film. It must be said that the opening chapters of the original manhwa – chapters 0 through 5 – are stuffed full with jargon and exposition that hurts the pacing and doesn’t even pay off until much later. For a manhwa, that’s fine, because – depending on how fast you read – you can blitz through those opening chapters in minutes and come out the other end into the good stuff, which starts around chapter 6. For an anime, though? No such luck.

In this sense, Tower of God episode 1 made all of the right decisions when it came to adaptation. Gone are the lengthy explanations – Yuri does not explain what a Pocket is, for example – and any superfluous narrative elements have been cut or skipped over – for example, Bam has almost no hesitation in taking on the White Steel Eel, jumping instead straight into Yuri’s flying kick. What this means is that the episode’s pacing is much quicker than the original manhwa and stays much more engaging as a result.

Nevertheless, there are some unfortunate side effects to these adaptational changes. We don’t quite understand why Yuri is so fascinated with Bam (he is an Irregular), nor do we understand how she made her way to Headon’s floor in the first place. More crucially, however, we get very little indication that she will be tracking Bam through the back rooms of the Tower to retrieve the Black March from now on, which may end up adversely affecting the narrative at a later date.

Furthermore, some of the texture of the world is lost by cutting so much of the exposition – no longer are we fascinated by strange words and pulled into this strange world. There’s no reference to the etymology of Bam’s strange name, either, which seems a little counterproductive.

What matters, though, is that Tower of God episode 1 feels like the best version of the adaptation’s opening episode that there can be. All of the omissions, consequences be damned, were ultimately necessary in order to shore up the episode’s pacing and get to the best parts of the story much quicker. It’s not often that an adaptation does everything that you ask, so I’m pretty happy with it.

Even so, I hope I am not giving the impression that the team over at Telecom Animation Film has simply cut into the fabric of the source material to bring this adaptation to screen. There are also several elements that they, as a studio, have brought to the table – arguably the most important and effective being Kevin Penkin and his soundtrack.

It’s no secret that I am a big fan of Kevin Penkin, and not just because he is an anime composer in my own backyard. His sheer musical talent and passion for all things games, movies, and anime shines through in his incredible scores for Made in Abyss, Under the Dog, and even The Rising of Shield Hero. When I heard that he would be scoring Tower of God, I was understandably stoked.

Tower of God episode 1 proves that this hope was far from misplaced. From the moment go, Penkin’s musical touches are unmissable – everything from epic choruses to downbeat grooves provide this episode with an energy that most, even the series’ detractors, have recognized. Alongside the anime’s striking visuals, the soundtrack does so much work in making this adaptation entirely unique.

There are also some anime-original scenes that both give the episode character and paper up some of the cracks resulting from the cutthroat adaptational process. When Bam arrives on the second floor, the little detail where he eats grass, for example, makes clear his isolated upbringing, alone in an underground cavern. The scene with the activated Black March, too, has been extended to do much of the heavy lifting with regards to the protagonist’s backstory. We also get an idea of how the Regulars travel between floors, which is nice.

Since I watched Tower of God episode 1 on Crunchyroll, there were also several things I noticed in the anime’s English subtitles. For one, they call Bam ‘Bam’ instead of ‘Yoru,’ which is the Japanese translation of his Korean name that the voice actors say. (His original name contains the dual meaning of both ‘evening’ and ‘chestnut,’ but, as mentioned, the anime doesn’t tell us that.) Apparently, this decision was made to better ‘synchronize’ the anime with the original manhwa, so it is a fair one. Check out this article from Crunchyroll for more interesting insights into the series’ names and subtitles.

Even so, I wasn’t very keen on the subtitles’ use of ‘Non-Regulars’ to describe Bam, given that he is called an ‘Irregular’ in the manhwa. This feels like a massive oversight given the previous article’s professed aim, so I can’t but think that this might change in the coming weeks. Watch this space.

Speaking of voice actors, most of the parts have been relatively well cast. Taichi Ichikawa, in particular, is doing great work bringing out Bam’s innocence despite his relative inexperience. Nevertheless, I can’t help but feel like some of the veteran voice actors are coasting just a little bit. Mariko Honda as Yuri, for example, sounds entirely generic. And then we have Houchu Ootsuka as Headon, who seems to be overreacting to the point of exaggeration. Luckily, we don’t have to see that character ever again, so it’s a minor point.

It is upon reaching the second floor – the ‘Floor of Tests’ – that Tower of God episode 1 starts to really come into its own. In the first sense, this is because this is when the story itself starts to get a little more engaging – we finally get a proper action scene involving multiple actors, and the mechanics of the Tower really start to come into play – but it is worth noting that it would have taken much longer to get to this good content if it wasn’t for the episode’s earlier adaptational choices, so it’s all relative.

This part of the episode also introduces us to several key characters who will become integral to the story’s overall plot going forward: Khun, Rak, Anaak, Shibisu, and many others. Of course, we don’t spend much time with them, nor is this the first time that they appear – the very beginning of the episode gives us glimpses of them as it explains the concept behind the Tower – but it is exciting nonetheless.

Furthermore, once the credits start to roll, Tower of God episode 1 leaves off in a very good place. As a result of the earlier adaptational choices, we get to the establishment and introduction of our main trio – Bam, Khun, and Rak – much earlier, and the way that the episode ends upon their first meeting makes clear how momentous this occasion really is. Just you wait and see what comes of it.

Speaking of the credits, we should talk for a second about the opening and ending sequences. In terms of the OP, it’s pretty barebones at the moment with long credit titles and a sparse amount of animation, which only features Bam. Yet, I have my suspicions that this sequence may be added to over the coming weeks as more characters are introduced, so watch this space.

I would also like to comment on the ED, but the fact is that there isn’t one. Seriously – it’s just a credit scroll set to a song that feels quite out of place in an anime production. I’m not really that bothered, given that it hardly affects the overall story, but it certainly subverted my expectations. I guess that Telecom Animation Film and the production partners don’t want that sweet, sweet anisong CD money, after all.

By way of a conclusion, if you weren’t impressed with Tower of God episode 1, then that’s fair enough. Unlike many fans, I’m not going to sit here and tell you to stick with it because ‘it gets better’ – if you weren’t entranced by the series’ music, world-building, and premise, then you’re probably not going to enjoy it. The same can be said for the original manhwa, which is quite rough at the beginning. Don’t force yourself to watch something if you’re not going to enjoy it!

In any case, things are looking up for this Tower of God adaptation. Here’s hoping that it gets the attention it deserves to run for longer than a single cour, because the first ‘season’ is, in many ways, nothing but a prologue.

You can watch Tower of God episode 1 via Crunchyroll.