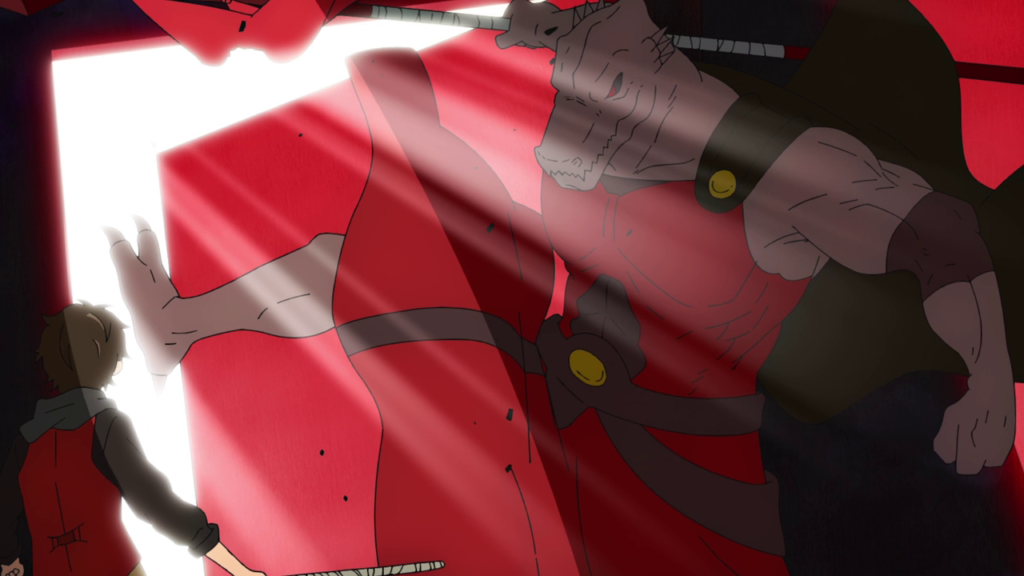 What an episode. Although I’ve enjoyed all previous installments of Tower of God so far, episode 3 feels like the first time that things have finally clicked into place. This week sees Bam, Khun, and Rak take on both Yu Hansung’s dastardly doors and the action-packed Crown Game, which shows off both the series’ eye for cerebral mind games as well as blood-pumping action. There are also many revelations that deepen our understanding of our main characters, as well as the relationship between them.

But these are things that were already present in the original manhwa, so it is Telecom Animation Film’s adaptation that deserves the most credit here. Part of the reason why this episode feels so fulfilling, in turn, is due to the fact that that pace has slowed down a little, only adapting five chapters of the source material – chapters 11 through 15. This is a huge change from previous episodes, which have tackled up to six chapters at a time. Consequently, it feels like the material has been afforded a little more space to breathe.

The studio also added to the source material in Tower of God episode 3 in a number of important ways. Firstly, a few extra scenes between Bam, Khun and Rak were inserted that go a long way in cementing their relationship. There are also several new details that go a long way in selling the authenticity of the world: changing the clock design in Hansung’s room so that it no longer looks like a computer-generated image, and making Lero Ro the face of some sort of soft drink known as ‘Banana Black.’ If that’s supposed to mean a banana-flavored version of the famous canned coffee UCC Black, then I don’t want a taste.

As a result of these changes, some of the character dynamics in Tower of God episode 3 have changed a little bit from how they were in the original manhwa. The relationship between our main trio, for one, is much more jovial, with several scenes seeing Bam and Khun sitting on Rak while the massive crocodile begs for more chocolate from Khun’s magical bag. This isn’t a massive change, given that the three are supposed to have a friendly relationship, but it is worth noting that this is much more comedic than the source material.

Furthermore, Khun seems a little more on edge. The emotional core of Tower of God episode 3 really is his traumatic past, beginning with a flashback to it and directly referencing it multiple times. At certain points, this works well, such as when Hansung remarks that his upbringing holds him back from accepting advice from others when taking on the door challenge. But when Khun can’t help but attack Hansung’s balloon-like plant when he brings up his past, that seems a little out of character. Khun is supposed to be cool and collected, not violent and aggressive.

In any case, we can only hope that this does not affect his character going forward. There are also other characters introduced in this episode that serve to further expand the universe of the series and plant some very important narrative seeds going forward: Hansung, for one, but also Anak and Shibisu, who get their first proper introduction since teaming up in episode 2. We also get a glimpse of Rachel and Androssi, both of whom will be instrumental for the final part of this arc.

After clearing Hansung’s test, Lero Ro’s Crown Game brings up the latter half of this episode, and I couldn’t be happier with the execution. In many ways, this is the first time that Tower of God has really had a chance to show off what it can do with an action scene, given that Bam was not able to fight in episode 2. Here, Kevin Penkin’s soundtrack does wonders as upbeat electronic music lends energy to Anak’s overwhelming power and her flippant personality is also conveyed very well. Considering that she is more or less my favorite character, safe to say I was satisfied.

Tower of God episode 3 then closes out with an original ending that clearly sets up the big reveals for next week. I won’t say any more for fear of spoilers, but I think that it’s safe to say that next week will come to an exhilarating conclusion – especially if the studio wants to get to the second floor’s final test as soon as possible. In this sense, we’re getting to the good stuff very fast, which I can only hope strengthens the series’ prospects for further adaptation.

You can watch Tower of God episode 3 via Crunchyroll.