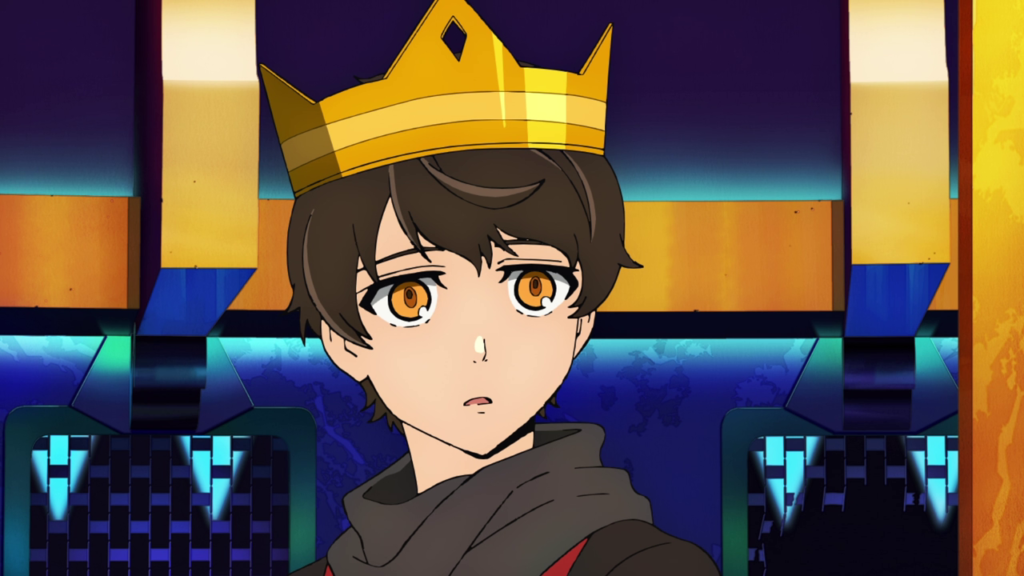 In Tower of God episode 5, the series finds itself at a crossroads. The end of the Crown Game is drawing near, and Bam, Khun, and Rak seem set to win. But then a handful of dramatic reveals occur, and the die is cast to carry over into another arc. Compared to last week, it feels much less fraught with frenetic energy and much more indebted to its own story commitments – even if it is still entertaining in its own right.

We do get, at least, one last taste of Tower of God’s trademark far-sighted storytelling. If it wasn’t already obvious enough from the amount of chocolate bars that Rak has devoured, then Khun’s bag has the power to duplicate items: something that is used to deadly effect not just in duplicating the all-important crown, but also in producing allies, which the conniving prodigal son uses to swing the battle in his team’s favor. This reveal certainly is exciting, helped along by Kevin Penkin’s cool, guitar-based soundtrack, even if it is not entirely surprising.

Another reveal in Tower of God episode 5 that should come as no surprise is the fact that the mysterious hooded blond girl from the other set of Regulars is, indeed, Rachel. But more important than this fact is the climax that it leads to: Bam jumping to protect her from their masked assailant, forfeiting the game, and unleashing his mysterious powers in the process. Once again, the production here works wonders as the Shinsu is given an awe-inspiring presence through the animation, along with Penkin’s epic soundtrack. 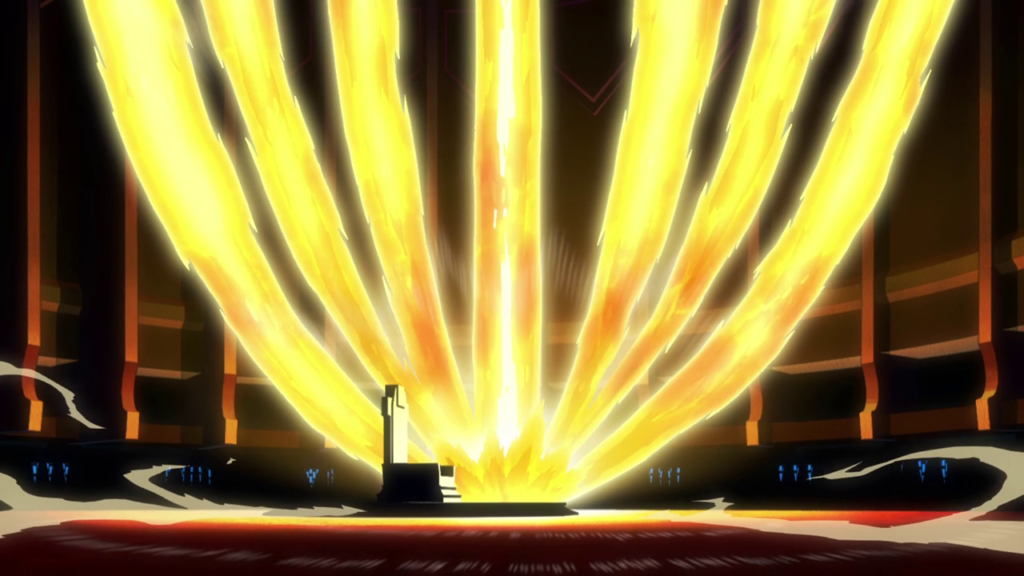 These two moments alone should be enough to make Tower of God episode 5 go down a treat. But the episode does feel a little more stilted due to the commitments that it has to fulfill for the overall narrative: introducing Androssi, for one. It is not really made clear why her entry is so important that the series has been building towards it for several episodes, nor is the actual meaning of the tense conversation between Lero Ro and Hansung ever explained.

Here, we come to one of the problems of adapting long-form, serialized narratives. Mistakes now can come back to haunt you later, which means that a careful approach is needed. The existence of a proprietary source material implies, in turn, a divide in the series’ audience that means that some viewers will understand what you are doing, while others may be left in the lurch.

As a fan of the original manhwa, it was hard not for me to watch these scenes in Tower of God episode 5 with anticipation and excitement. When Androssi’s hood dropped, so did my heart – her acrobatic fighting style was everything that I hoped it would be in motion. The fact that the anime diverts from the original manhwa and shows exactly how Bam ended the Crown Game, showing off his incredible hidden power, had me remembering all of the exciting moments to come. And when the tattooed back of Mazino appeared on screen during Lero Ro and Hansung’s conversation, that was almost enough to push me over the edge.

But I do worry that anime-only fans may be a little discouraged. Things probably won’t get better from here on out, either, as the new arc that these new narratives and characters are leading into begins with a fair amount of exposition on the series’ power system, lying further groundwork for the battles to come. As a result, Tower of God finds itself at an interesting set of crossroads.

Alas, I can only give my point of view as it relates to my own particular set of circumstances. In this sense, Tower of God episode 5 was excellent. It may have felt a little slower and a little more contrived than others in the past – even the first – but the function that those drawbacks serve only fills me with more anticipation. Tower of God may find itself at a crossroads, but that doesn’t mean that the journey is over yet. Far from it.

You can watch Tower of God episode 5 via Crunchyroll.