Tower of God: The World’s Most Powerful Webtoon

The WEBTOON series Tower of God is practically synonymous with the idea of manhwa, full-color Korean comics inspired by Japanese manga yet drawn on a vertical, scrolling canvas. Ever since launching in 2010, the series – drawn by Lee Jong-Hui, better known by the moniker SIU (Slave. In. Utero) – has racked up a whopping 4.5 billion views worldwide and will be adapted into a TV anime by Telecom Animation Film this spring.

That anime, in turn, may be the most important anime airing this season. It has the potential to change the face of the industry forever, opening up the floodgates to an untapped ocean of resources and cementing the industry’s continuing internationalization. But in order to explain that, we first need to explain what drives people in such numbers to the series, as well as explain the hurdles that the anime needs to overcome to be the success that it so desperately needs to be.

What’s the Deal With Tower of God?

Trying to explain the appeal of Tower of God is difficult on its own merits because it feels like every single anime, manga, and video game ever wrapped up and rolled into one. A young boy named Bam (meaning both ‘night’ and ‘chestnut’ in Korean, by the way) enters a mysterious ‘Tower,’ at the top of which lies whatever your heart may desire. But Bam isn’t interested in fame, glory, or riches; he’s simply chasing after a young girl named Rachel, who entered the Tower so that she might one day be able to see the stars. If that doesn’t already bring to mind such stories as Sword Art Online, then I don’t know what does.

Yet, if I was to make any concrete comparison, then I would compare Tower of God most readily to Hunter x Hunter. Much like Yoshihiro Togashi’s ever-stalling shonen series, SIU’s saga makes use of strict game-like rules to craft its action scenarios; instead of something more freeform like Bleach or Naruto, it only allows its characters to use their powers in strict scenarios, which stem necessarily from the various ‘tests’ that they have to undergo. The whole ‘Shinsu’ power system also seems to heavily resemble the system of Nen, but there’s no evidence to prove that the author was directly inspired by this.

In any case, Tower of God appeals to the most base instincts of any fan of shonen action manga, but that is not to say that it is a rip-off. Rather, SIU’s unique approach to world-building imbues the series with a sense of occult mystery that is hard to quantify; almost every invented word or phrase has some sort of comeuppance or payoff later, speaking to the author’s far-sighted vision that stretches far beyond the Tower of God universe and into another one, known as the Talse Uzer story. But we are getting ahead of ourselves.

What reinforces the mystique of Tower of God is its DIY, homebrew nature. SIU began the series back in 2010 based on notes that he made during his two years of military service (compulsory for all males in Korea between the ages of 18 and 35) by uploading to Line Webtoon’s ‘Challenge Corner,’ which gave rookies with the chance of serialization if their series got enough attention. Something about SIU clearly clicked, because he was offered a serialization not long after.

One of the best comparisons I can make to substantiate the series’ homebrew nature is with Andrew Hussie’s Homestuck. Although the web series has since passed out of the limelight, Homestuck once dominated the internet thanks to its unique humor, fascinating characters, and far-too-complicated story. None of this would’ve been possible on the same level if the series had been published by someone else or if Andrew Hussie had not had complete creative control, and in this sense Tower of God is no different: no one but SIU would’ve focused as much as he does on world-building, nor would he have been able to craft something so unique if chained to a publisher. Such is the power of self-publication.

Challenging the Tower of God

Even so, complete creative control can have its drawbacks, and Tower of God has plenty of those. It must be said that the series indulges at times in far-too-complicated jargon and lengthy exposition, which ends up dragging down the pacing and quality of the story as a result. Nevertheless, an understanding of the circumstances of the series’ production circumstances is required, which allows many fans to look past its flaws.

One consequence of Tower of God’s flaws is that it takes a fairly long time for the story to truly ‘start.’ The whole of the first ‘season,’ comprising about 70 chapters, is more of a ‘prologue’ than anything else. Much like other long-form, serialized stories, then, one of the things you will hear most often from fans of Tower of God, especially when you are just starting out, is that ‘it gets better.’

For the most part, this is true. But if you’re not in for the long haul, chances are that you won’t truly appreciate all of what the series has to offer. Some readers are fine with such an approach, others are not. Unfortunately, however, this spells rather bad news for the Tower of God anime, which aired its first episode just the other day.

Now that we know that the anime will air for 13 episodes, that leaves Telecom Animation Film in a rather prickly position. It will be impossible in a mere 13 episodes, no matter how they chop and change the original story, to get to the end of the manhwa’s first ‘season’ and thus provide a proper introduction to the series. In reality, the studio will most likely be forced to leave off halfway through an arc, which never leads to a feeling of completeness. Fans will be pleased, sure, but what about the newcomers? 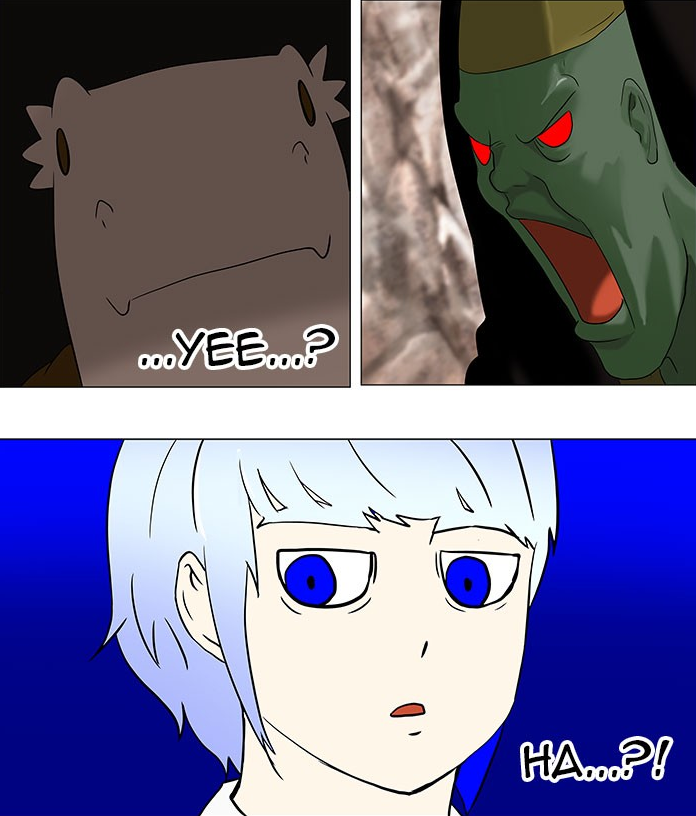 That’s not the only problem that the studio faces in adapting Tower of God, either. Although he has his moments and has improved mightily over the years, it must be said that SIU is not the greatest artist in the world. His characters and proportions can often look off, and the whole thing simply looks a little rough around the edges. That’s fine for a webtoon, which can be read very fast and comes with a certain set of expectations, but such standards won’t fly in anime production.

Already, the reactions to episode 1 from reviewers that have not read the original manhwa prove that these problems will take time to overcome. Nick Creamer pointed out some unfortunate errors with compositing, and Dee over at Anime Feminist found it difficult to engage with the story on account of Bam’s flat personality. That last point is particularly important as that fact does not change until season two and beyond, which is content that the anime will almost definitely not reach, at least in its first season.

Of course, whether or not the anime gets another season depends on the success of the first season, which depends, in turn, on how compelling the studio can make the adaptation. On this point, it must be said that several important steps have been taken. As I explained in my review of the first episode, the script cuts out some of the unnecessary exposition in order to up the pacing, and Kevin Penkin’s soundtrack is absolutely on fire. If the adaptation can keep these things up, then I have no doubt that it will turn out to be a good one. The only problem is, again, whether or not it can convince newcomers.

The World’s Most Powerful Webtoon

Aside from just creating a good anime and satisfying those (very vocal) fans, there is a good reason why so much is riding on Tower of God’s success. Whether or not it fails or succeeds has massive consequences for the industry as a whole, making it perhaps the most important anime airing this season.

Firstly, it opens up the floodgates to a largely untapped pool of source material for anime studios to adapt. The South Korean comics industry has been going since the 1950s, and webtoons started to boom in popularity in the 2000s with the advent of the internet. The number of manhwa that are ready for anime adaptation exceeds the imagination, which begs the question as to why none of them have yet to be adapted. As quite possibly the world’s most popular webtoon, Tower of God is leading the charge.

If manhwa do manage to break into the anime industry, then it is no understatement to say that the industry may undergo a creative renaissance the likes of which hasn’t been seen since the bubble years of the 1980s. The unique cultural and creative perspectives that manhwa offer – the industry typically allows more freedom than the Japanese manga industry – may provide the antidote to the inondation of isekai light novel adaptations that make following the anime industry right now feel a little tiring. But that’s a personal point, so let’s return to the subject at hand. 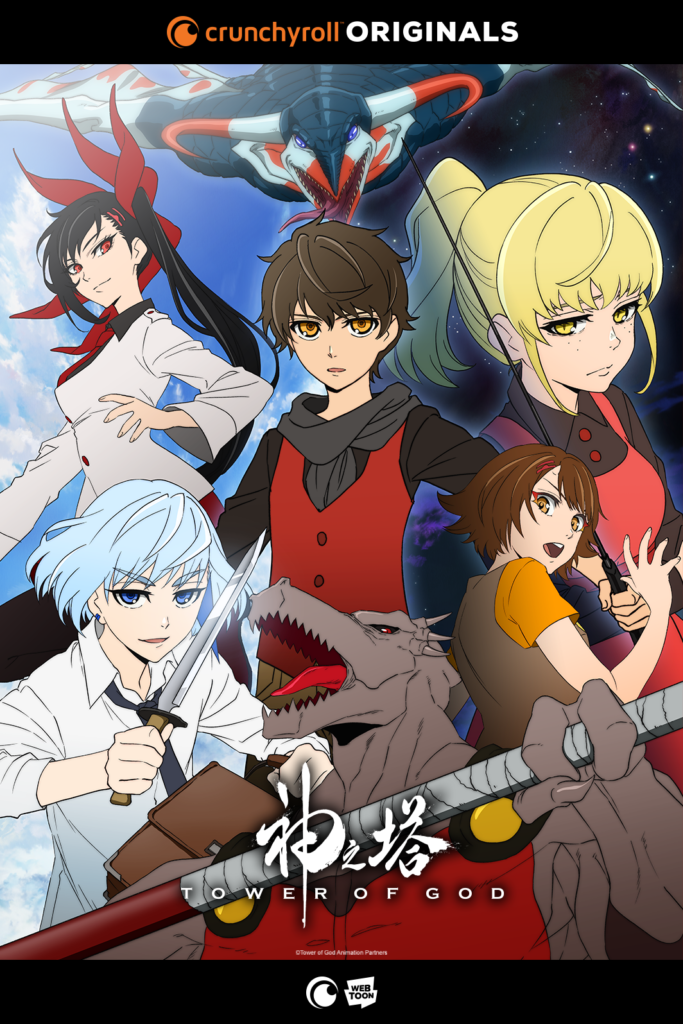 One of the most interesting things about Tower of God is its unique international production circumstances. Crunchyroll signed a deal with WEBTOON earlier last year to co-produce animated content based on the company’s massive library of digital comics, and Tower of God is just the first step in such a plan. Taken alongside other, in-house productions such as High Guardian Spice, the adaptation will form the basis of the newly-launched Crunchyroll Originals. In terms of manhwa, Noblesse and The God of High School are also included. Clearly, there’s a lot riding on Tower of God – here’s hoping that it pays off.

International co-productions are nothing new, with Netflix already breaking new ground in 2017 with the Masaaki Yuasa-directed Devilman crybaby. Nevertheless, Tower of God marks the first time that this process has gone truly global: making use of a Japanese studio to adapt a Korean comic, promoting it through an American company. If that doesn’t breathe new life into the industry, then I don’t know what will.

All in all, the prospects for Tower of God are pretty exciting. Not only will it bring to life a story that has captivated millions with its DIY mystique, but it may also have a lasting effect on the anime industry as a whole. In that sense, it truly is the world’s most powerful webtoon. Here’s hoping, then, that Telecom Animation Film manages to get to grips with the source material’s unique challenges to deliver a compelling first season – even if 13 episodes may not be entirely ideal.

You can read the original Tower of God manhwa via WEBTOON and watch the anime as it airs weekly via Crunchyroll.