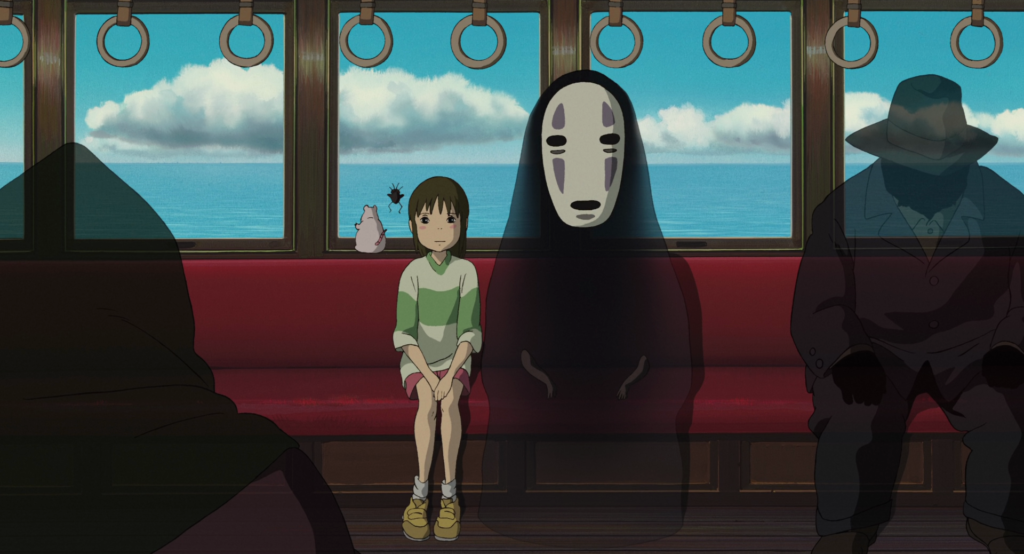 Anyone who has ever been to Japan knows that Japanese rail transit goes just about everywhere.  Japanese trains have a reputation for being fast, frequent, efficient, and often crowded.

Naming off every example of a train ride in anime would take too long to document. But take a look at these interesting examples:

The wacky, wild, and weird comedy Nichijou has quite a few gags involving trains. For example:

In one scene, the three main girls are running for the train.

(That’s something which they say you should never do.)

Yuuko manages to make it onto the train before the doors shut.  The others don’t quite make it.  Mai and Mio watch as the train leaves the station. Yuuko’s expression as she realizes she made a horrible mistake is priceless.

In another scene, Yuuko, Mai, and Mio somehow end up as the only passengers on a train. They goof around for a while, and then Mai discovers a better idea.

She takes a nap in the overhead luggage rack. People in Japan have been known to nap on trains, but this is taking things to extremes.

Then, just to dial it up to 11, the others also decide to get some rest, with Mio sleeping on the bench seat, and Yuuko on the floor.

(That can’t be sanitary; definitely don’t do that.)

Then there’s the insane chase scene where Yuuko ends up running after Mio on train tracks.  The two schoolgirls somehow manage to squeeze between two speeding trains.

(These are animated characters with impossible running skills. Never, ever, ever do this.)

Whenever Haruhi would lead the SOS Brigade on some “search for aliens, ESPers, or time travellers” outside of school, the members always seemed to inevitably meet at the local train station. There’s a logical, cultural reason for this.

Japanese railway stations are good places for people to gather. Just about every town or village will have at least one, and they tend to be centrally located. They often have a landmark plaza or park of some kind outside the fare gates, which serves as a convenient meeting place.

The most famous of these is the statue of Hachiko in Shibuya. But, many local stations will have something.

Nishinomiya-Kitaguchi Station in Hyogo Prefecture has a distinctive clock, which can be seen in the series.

A railroad crossing adds a bit of atmosphere to a scene in The Melancholy of Haruhi Suzumiya, Part 5.  As Haruhi crosses the tracks to leave, bells ring and warning lights start to flash. It all reinforces Kyon’s narrative that she doesn’t want him to follow her.

And speaking of railroad crossings ….

Crossing Time (Fumikiri Jikan) is probably not a well-known anime series, but it delighted me when it showed up on Crunchyroll in April of 2018.  If you haven’t seen it yet, you might want to give it a try.

Every episode takes place at a typical suburban railroad crossing, or on a station platform. The episodes are short and sweet — roughly about the time it would take for a commuter train or two to pass.  There are only 12 episodes.

There’s no story arc. Each episode is a self-contained, slice-of-life comedy story — although there are several two-parters. The stories deal with high-school romantic confessions, embarrassing moments, a touch of nostalgia, and just life in general.

In the series, the trains are mundane and commonplace. And yet, if the characters didn’t have to wait at the crossing, many of these everyday stories wouldn’t happen.

In the first episode, we get our first look of Midori and Seiji at Hoshikawa Monorail Station in Yokohama. Midori has a huge crush on Seiji. Seiji, who is busy on the other platform, doesn’t even notice her.

As it so happens, the real Hoshikawa Station isn’t a monorail station. In fact, the Shonan Monorail doesn’t go near there. That could be a bit of creative license by the animators. Or, it could mean that Midori’s memory is faulty.

In any case, the monorail continues to appear in the background throughout the series.

The monorail serves as an interesting and distinctive visual reminder of where the action takes place. Hanging surreally up in the air as it does, it is also as unique as the anime’s plot itself — which involves a tough guy with a cute girl for a right hand.

Yuigahama has a train station, but it’s not your typical station. It’s for the Enoshima Electric Railway, one of a handful of historic streetcar lines remaining in the greater Tokyo area.  It’s considerably dinkier than many trains in Japan, with many sections of single-track running.

As I mentioned in my “real-life anime locations” story, the “Enoden” gets a brief cameo in an episode where Ika Musume explores the area around Kamakura.

As trains go, the Enoden is the opposite of the Shonan Monorail — it’s old-fashioned and historic, while the other is futuristic-looking. Funnily enough, the two trains stop a block apart from each other in Enoshima.

Of course, anime is a business, and businesses advertise on trains. That’s no big deal.  But over the years, some trains have gotten the full anime Itasha experience:

Of course, when one talks about trains in anime, there are a couple of trains which ought to be mentioned.

These trains won’t be found on any real-life Japanese railway, but any reasonable “anime train” list wouldn’t be complete without them.

The anachronistic train of Galaxy Express 999 travels through outer space, rather than on rails. But it is still a train nonetheless.

Best of all, the locomotive of the titular Galaxy Super Express is inexplicably a steam engine —  it’s designed to look like a JNR Class C62 steam locomotive.

Hayao Miyazaki’s Spirited Away is full of amazing scenes that will blow your mind. (It’s a Miyazaki film; of course it is.)

However, as a rail fan, I have always been fascinated by the scene where Chihiro and No Face ride an old-fashioned train. Which wades through a lot of water. And is filled with ghosts. It’s a very dream-like scene in a dream-like movie. The whole thing is just beautiful.