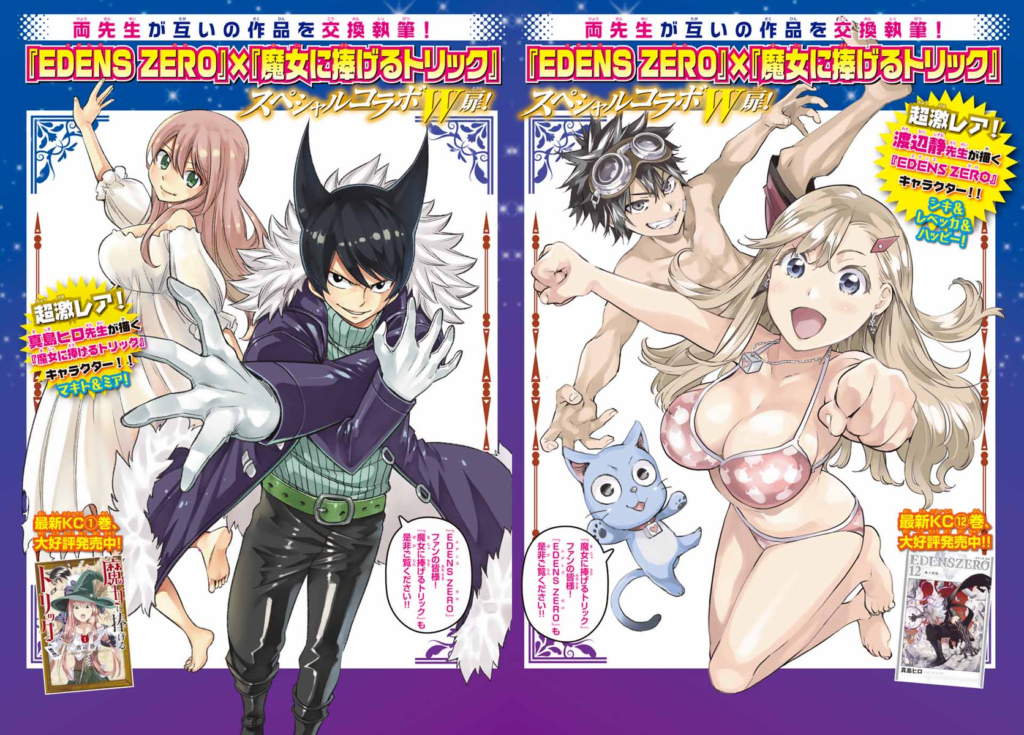 It seems to be one of Weekly Shonen Magazine’s favorite tricks to pair up a popular manga with a less popular but up-and-coming series from the same genre. We saw this approach earlier in the year with The Cuckoo’s Fiance and Kanojo mo Kanojo, and now the same thing is happening again with Shizumu Watanabe’s Tricks Dedicated to Witches: already proving popular, it has further borrowed the power of Hiro Mashima’s Edens Zero.

Hiro Mashima hardly needs an introduction. The author has been a backbone of Kodansha’s magazine for the past ten years, beginning his career in 1999 with RAVE and currently serializing Edens Zero. Along the way, he also created Fairy Tail (one of the most popular shonen series of the 2000s) so his support for Shizumu Watanabe is nothing to sniff at.

The Edens Zero x Tricks Dedicated to Witches collaboration consists of the above illustration, penned by both Mashima and Watanabe and published in this week’s issue no. 1 of Weekly Shonen Magazine. Depicting the main characters of each other’s respective series in their own styles, rough drafts are also available for perusal via their respective Twitter accounts (Mashima, Witches).

What’s perhaps most interesting about this Edens Zero x Tricks Dedicated to Witches collaboration, however, is Mashima’s comment. Speaking from a place of admiration, he declared that he’s ‘hoping for an anime’. Considering how fast Kanojo mo Kanojo got one, that’s not entirely out of question.

Regardless, Tricks Dedicated to Witches is already proving popular. Taking place during the witch trials of 16th century Europe, it has intrigued readers on account of its unique premise and spin on magic, concerning ‘real,’ performative magic as opposed to supernatural abilities. According to Shoseki rankings, its first volume sold an estimated 6000 units in the first week of its release and Kodansha is currently running a ‘thank you’ campaign.

Let’s hope that this Edens Zero collaboration gives it the push that it needs to reach a wider audience, as well as put it on track for an official English release. In the meantime, you can read Tricks Dedicated to Witches in Japanese via Magazine Pocket.