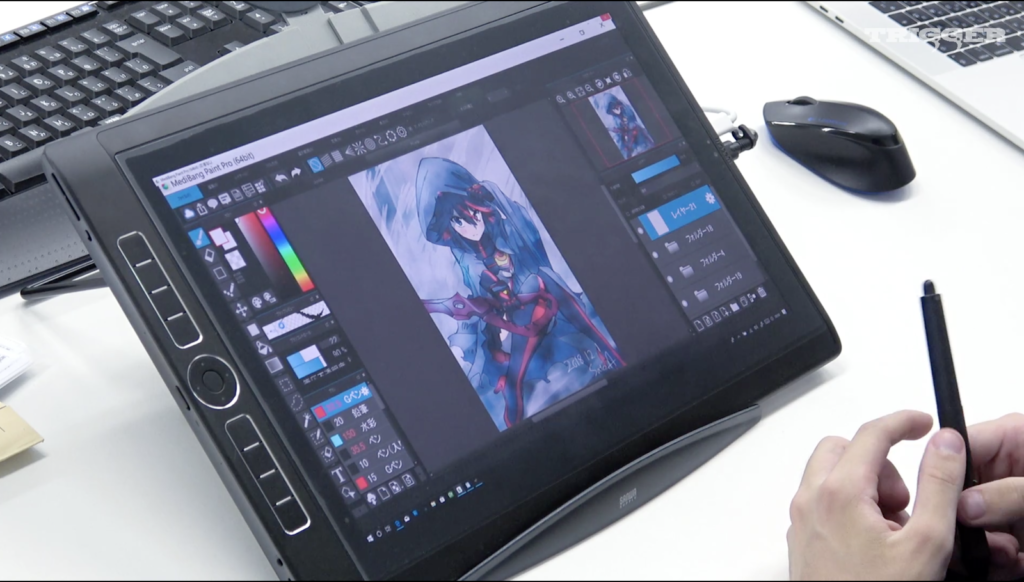 Last weekend saw Studio TRIGGER hose their second ever Twitch livestream, calling on the talents of young in-between animator Akihiro Satou who was invited on stream to create an illustration of Kill la Kill’s iconic main character Ryuko Matoi. It’s well known amongst the anime community that TRIGGER’s live-streams provide a prime opportunity for Western fans to pose questions to various members of the studio, and during this particular session, the guests were the aforementioned Akihiro Satou as well as producer Hiromi Wakabayashi who were more than willing to answer questions.

Opening up with Akihiro Satou greeting everyone, as well as making it clear that he has not been working at the studio for all that long, the stream had begun. One point that Satou wanted to make abundantly clear what that he hadn’t actually been with TRIGGER for all that long — less than a year, in fact, having only begun in April of 2018 as part of the SSSS.GRIDMAN project. It’s quite a rare experience to have a young animator do a live drawing in front of a crowd or to be brought on as the main focus of an event at all. In fact, this is the first time it has happened for Studio TRIGGER throughout their extensive history. The first question aimed at Satou asked whether he could share his experience as an animator, why he chose to become one, and how his journey has been thus far (particularly in regards to working as an in-betweener at TRIGGER). Breaking down the response into smaller portions, he brings up that his experience in TRIGGER is “very fun”, and how he appreciates that nobody there gets scolded for drawing what they want to draw. He then delves into how he attended an art institution after high school, and how he ultimately wants to become a character designer at TRIGGER.

As usual, there was some prodding around for “new seasons” for existing properties. Fans asked whether the studio had any plans for a second season of Space Patrol Luluco and “whether they could expect to see another Luluco/Trigger Girl cameo in any upcoming shows”. It was an easy response, with a lot of the creators at the studio would love to do a second season of Space Patrol Luluco (in the same vein as Panty and Stocking with Garterbelt), and if there’s enough demand then perhaps there is a chance the studio can find a sponsor. Though as for the future cameos of Trigger Girl, they “can’t say anything yet”.

An interesting question that came up was one asking about the nature of the hiring process. What generally happens, for animators, is that there is a “season” during the year where TRIGGER puts out the call for portfolios. They expect animators to send in work from their art college years, though sometimes applications can come from people straight out of high school. These portfolios are mostly reviewed Masahiko Otsuka as well as Hiroyuki Imaishi and other core staff. If the portfolio looks promising, they will ask the individual to come in for an interview. During said interview, there’s a technical test during the which consists of the applicants drawing animation layouts These layouts are shown to whatever studio member is most appropriate, who will contact the applicants to inform them of their performance. This process takes usually takes place during the Spring. With regards to Hiromi Wakabayashi’s job position, there wasn’t much to say about the hiring process. While Hiromi Wakabayashi didn’t leave GAINAX with the other core staff when they went to form TRIGGER, his close connections to them made it very easy to transition to the company at a later date.

Wakabayashi brought up that he has seen a lot of Satou’s sketches online, and as such was wondering whether Satou still preferred to illustrate digitally or has his preference also shifter to pencil and paper in this regard. Satou talked about how he is currently leaning towards pencil and paper because booting up his PC is too much of a hassle for doodling. Satou even admitted to doodling during work hours, though everyone in the room promised not to rat him out. Fans also wondered how much creative control a director typically has over their work, whether it’s an original or an adaptation. For TRIGGER’s adaptation work, Wakabayashi states that the creators must first become a fan and understand the original title. This is especially important because what they’re working on is still somebody’s else’s property. As a result, they prefer to leave the TRIGGER likeness aside and focus on what the original title did well to best adapt it. For completely original titles, as a studio, they are very fortunate to be given more opportunities than most studios, purely because there is a lot of creative freedom involved. At TRIGGER, if there is a good idea, they will incorporate it into the work regardless of where it’s from it originated. Just because someone might be an in-between animator, a production assistant, or ‘a janitor’, if they have a good idea, it very well may make it into the final product. However, it is noted that due to the abundance of ideas, that if somebody is going to pitch their idea it’s better for them to be good at handling criticism.

Although it’s one of the more frequently asked questions, the studio members were asked which piece of classic media they would like to revamp and give a TRIGGER spin if given the chance. Satou couldn’t think of any on top of his head, instead opting of giving a general answer of wanting to reboot mecha genre, especially due to its scarceness in the industry. Wakabayashi on the other hand, given that he could give any answer he wanted, went straight to Star Wars, followed by his own Gundam series, “Gundam T (as in T for trigger)”. He also comments how, as a Gundam fan, there would be no way in the world he would watch something like Gundam T.

When asked more specifically about character design and his aspirations to become one, Satou bluntly answers that he wants to become one because it is cool. That being said, when questioned whether he would prefer to do characters or mechs, he leaned towards mech design. There was a comment about the staff at TRIGGER preferring to draw characters over mechs, and Satou says this is true for all of his friends too. Digging deeper into his aspirations to design mechs, Satou brings up Nekketsu Saikyo Go-Saurer as one of his inspirations. Wakabayashi confirms that this is, in fact, a good title, but ponders as to why Satou would watch something from his own generation. As it turns out, it was just because it was a recommendation from some of his friends. This outlines Satou’ preference for super robot series over more realistic mecha.

While it would have been nice to hear some more questions directed at Satou specifically or about the production of SSSS.GRIDMAN, these live-streams are always a treat. It’s a bit unfortunate that it’s unlikely for us to see another young animator get to take the stage any time soon, but it’s still exciting to see who the studio will bring on next. You can check out Studio TRIGGER’s official Twitch page, here.