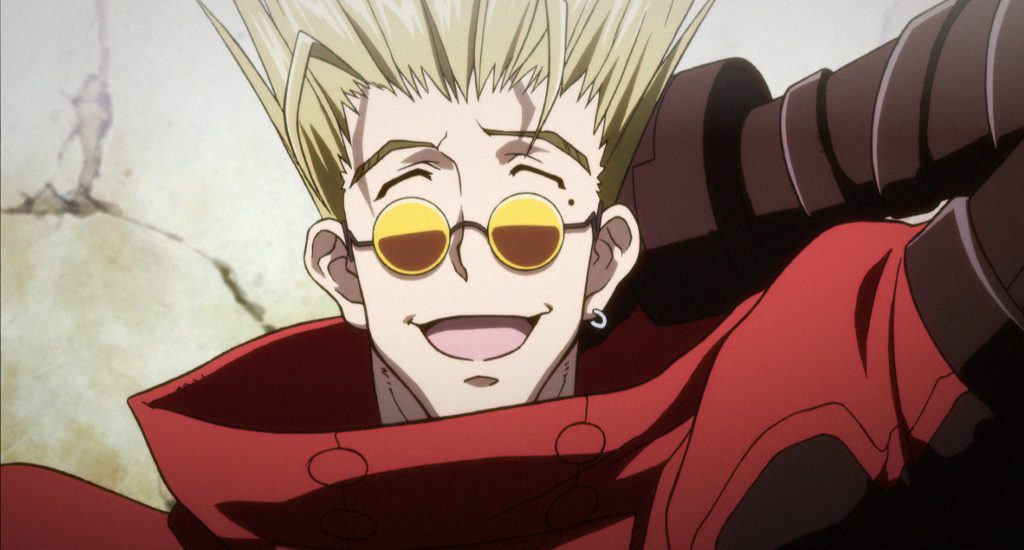 From the second the opening riff of Trigun’s instrumental OP starts blaring, you know you’re in for something good.  An out of this world space western with a charming personality and some real depth underneath the surface shows like this don’t come around so often anymore.

You can go back to Trigun today as the antics of Vash The Stampede, a man so destructive insurance companies consider him an act of God, are just as entertaining and heartfelt as they ever were. Some shows we like to return to because of the nostalgia but, while we are nostalgic for it, Trigun still kicks absolute ass even without the rose-tinted glasses.

No two ways about it, this is the gunslinging show you need to watch.

The Trigun Anime Was a Defining Adult Swim Era Show

Trigun is downright old school at this point but back in the day, it was inescapable. It originally aired on Japanese TV in 1998 and five years later it would enjoy a viewer successful run on Adult Swim in 2003. It scratched a similar itch to Cowboy Bebop and fans really took to Vash The Stampede and his signature red coat.

Anime cons circa 2003-2005 had no shortage of cosplayers spiking their hair, dragging the ends of their giant red coats on the ground as they stomped about the dealer halls. Like any show, its time in the spotlight has come and gone but Trigun left a bullet-hole in the culture that has festered for years, leaving scars that we’d never forget in our brains.

For years and years and years, fans diligently asked for more Trigun. The one 26 episode anime just wasn’t enough even if it had a very definitive ending. There was always way more manga to be adapted but a second season has unfortunately never been in the cards for Vash and his fans.

Miraculously though, after a few years of chatter about a movie project in the mid-2000s, the feature-length Trigun: Badlands Rumble finally came out in 2010. It’s an original anime movie featuring input from manga creator Yasuhiro Nightow to tell a new story and give fans a much-welcomed return to Trigun.

These days a minority of fans hope that someday down the line, Trigun will get its Hellsing Ultimate / Fullmetal Alchemist Brotherhood treatment where a true to the manga version of the show gets readapted from the very beginning to its conclusion.  While another fan favorite, Akira, has long wished for a second adaptation in production, as of now Trigun lays dormant.

Here’s Where You Can Watch All Trigun Episodes

Right now, there are two convenient ways to watch Trigun if you don’t have dusty old Geneon pioneer discs yourself. A DVD boxset has been made available by Funimation and usually, it runs for less than thirty. Unfortunately, no Blu-Ray release exists yet.

If streaming’s more your thing, at the time of writing Trigun is available via Funimation Now for just $5.99 a  month and on Hulu. We can’t guarantee how long this classic anime will stay on the latter though, as places like Hulu and Netflix constantly rotate in and out shows they don’t produce themselves.

What About The Trigun Manga?

The Trigun manga continued long after the original show ended. Almost a full ten years in fact, though the latter end of its run saw some irregular publication. As the manga continued on, as many series that only get a single season adaptation, the story began to differ further and further.

It’s a little rougher looking than the anime, but being the original the comic has a lot to offer. More in-depth lore, a completely different series of events after a certain point, and a unique illustrative style, it’s a separate experience to the anime that deserves your attention.

Trigun Maximum is less a sequel to the original Trigun and more a direct continuation. The series switches publishers and magazines in the middle of its publication and thus had to be rebranded. Make no mistakes, Trigun and Trigun Maximum are all one story that Nightow has explicitly said should be looked at as a singular work. Both series were published in the United States by dark horse comics.

What Makes Vash The Stampede Different From Other Main Characters

While often Silly and erratic on the surface. The iconic Vash The Stampede has lived a long time and has seen a lot of pain in his life. Similar to Rurouni Kenshin’s titular main character, Vash generally refuses to kill because of his vast past. He strives to treat everyone with kindness and empathy and like any hero, he is willing to put himself in danger again and again to save the day.

However whether he’s getting into shoot-outs with bandit gangs or unintentionally causing a commotion wherever he goes, you always know there’s something beyond his cheerful and confident exterior; a pain the subtlety drives each and every one of his actions.

Everybody Running Around In Trigun’s Wild Wild West

We already talked about what sets Vash apart from the rest but we’d still like to touch on some of the Humanoid Typhoon’s signature traits. Known for his Love and Peace catchphrase, Vash saves person after person although he’s been known to turn towns into rubble once or twice. Vash faces enemy after enemy who comes after him, as he has a huge bounty on his head, and it’s something of a miracle that he’s able to continually fend them off without killing them.

A real fan favorite, Nicholas D. Wolfwood is a traveling priest who eventually links up with Vash on his travels. Like every cool somewhat mysterious cigarette smoking anime character, Wolfwood has a past he doesn’t like to talk about much. You might wonder why Wolfwood carries around a gigantic cross that is both a big gun and has smaller guns inside it.

While not technically the top of the enemy chain in Trigun, you could call Legato Bluesummers the main antagonist of the anime at least. Legato has it out for Vash, and while he has sufficient psychic powers to wreak serious havoc, he also taps the Gung Ho Guns to help him try and get the job done. He’s not above putting women and children in danger to do what he has to.

An agent of the Bernardelli Insurance Society, Meryl has been tasked to follow Vash’s path of destruction to try and reduce the amount of damage her company has to pay for. Over the course of the series she realizes Vash isn’t so bad, coming to terms with why some call him more of a ‘doofus than desperado’. Quick to anger at the start of the anime series, she chills out over the course of it.

Another Bernardelli Insurance agent, Milly Thompson roams Planet Gunsmoke with Meryl strife helping assuage damages. Unlike Meryl, MIlly is quite pleasant and agreeable which makes you wonder why she’s an insurance agent. When she has to though, she keeps a gigantic machine gun on hand for when she has to blast bandits and other no-good doers away.

Over the course of the series, she develops a particular relationship with wolfwood.

The big bad of Trigun and Vash The Stampede’s Twin Brother. Something’s clearly not right with Knives and you have to wonder why he and Vash have ended up so differently. Despite being the final boss of the show, he only shows up at the very end of the Trigun anime. If you want to know more than the anime shows you about MIllion Knives, you’ll have to read the Trigun Maximum manga where his character is fully explored.

One hell of a name though.

Rem was an extremely influential figure to Vash and Knives during their younger days. If her last name doesn’t give it away, she meets with an unfortunate end well before the show starts though saying how and why would give too much away. To this day, Vash keeps the kind and caring Rem close to his heart who serves as the main inspiration for his pacifistic ways.

A group of assassins and bounty hunters, what’s the difference in this mostly deserted planet setting really, that for reasons end up teaming Legato Bluesummers and set their sights on Vash. Many use wacky guns to get the job done but others have more exceptional gimmicks, like Midvalley the Hornfreak using a lethal Saxophone for a weapon.

While not a character in the way Legato Bluesummers and Milly Thompson might be, but it wouldn’t be right to ignore Kuroneko-sama. As the ‘neko’ in the name might suggest, Kuroneko-sama is a black cat who makes a small appearance in every episode of the Trigun anime and has even carried over to make appearances in Nightow’s newer project Blood Blockade Battlefront. Nightow has gone on record to say the cat carries no significant meaning outside of being a character he likes to draw.

Where Can You Watch Trigun?

If you didn’t catch Trigun during its many repeat airings during the golden era of Adult Swim alongside its stylistic cousin Cowboy Bebop and Ghost In The Shell: Stand Alone Complex, don’t fret. Being one of the most beloved series from yesteryear, Trigun is easily available on disc or for streaming.

Unfortunately, while the series has yet to be put out on Blu-Ray with a much necessary 1080p remaster, the Funimation box set often sits at the 20-30 dollar price range making it rather affordable. If you only want to give the series a once-over, you can watch it and the Badlands Rumble movie with a Funimation subscription.

Both the original Trigun manga and its follow up Trigun Maximum are available from Dark Horse.