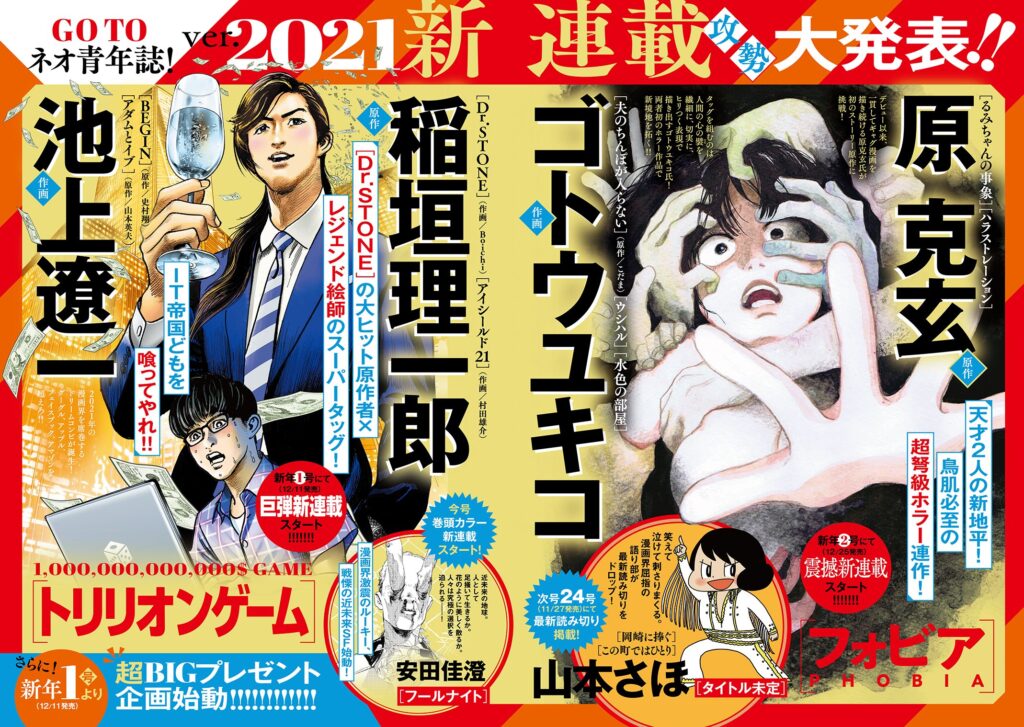 Big Comic Superior will see the forces of two legends combine on December 11: Riichiro Inagaki and Ryoichi Ikegami, who will be teaming up for a new series titled Trillion Game.

Riichiro Inagaki, of course, is perhaps best known for writing such modern Weekly Shonen Jump hits as Eyeshield 21 and Dr. STONE, while Ryoichi Ikegami cut his teeth a long time ago working as an artist alongside such authors as Kazuo Koike and Sho Fumimura on Crying Freeman and Sanctuary. His work has earned him a legendary status in the industry, winning the Shogakukan Manga Award in 2001 for Heat, alongside Fumimura.

To have such legends collaborate in the pages of Big Comic Superior will be something to behold. Not much is known about Trillion Game other than what is specified in the above tweet: apparently, it will have something to do with technology, and the publisher promises that “IT empires” such as “Google, Apple, Facebook, Amazon” will “be toppled.” We’ll just have to wait and see what it is all about when Trillion Game begins in the December 11 issue no. 1 (2021) of Big Comic Superior.

Don’t get your hopes up, too much, however, as Ikegami is over seventy years old at this point and is unlikely to dedicate himself to a long-term serialization. In fact, the authors have crossed paths once before: creating the short series Kobushi Zamurai in 2016, which ran for two chapters. Is that about how much we can expect from Trillion Game? Maybe.

Inagaki doesn’t specify in his tweet how long Trillion Game will last for, just that he is starting a “new serialization.” The plot thickens. Nevertheless, the fact that Inagaki – and his collaborator Boichi, for that matter – can find the time and energy to put together a story alongside a weekly serialization will never seek to amaze me, considering the huge strain that such a schedule puts on a creator.

New ‘Dr. STONE Reboot: Byakuya’ Spinoff: Back to the Past, Forward to the Future

Catching up With the Dr. STONE Manga: Still a Masterpiece?