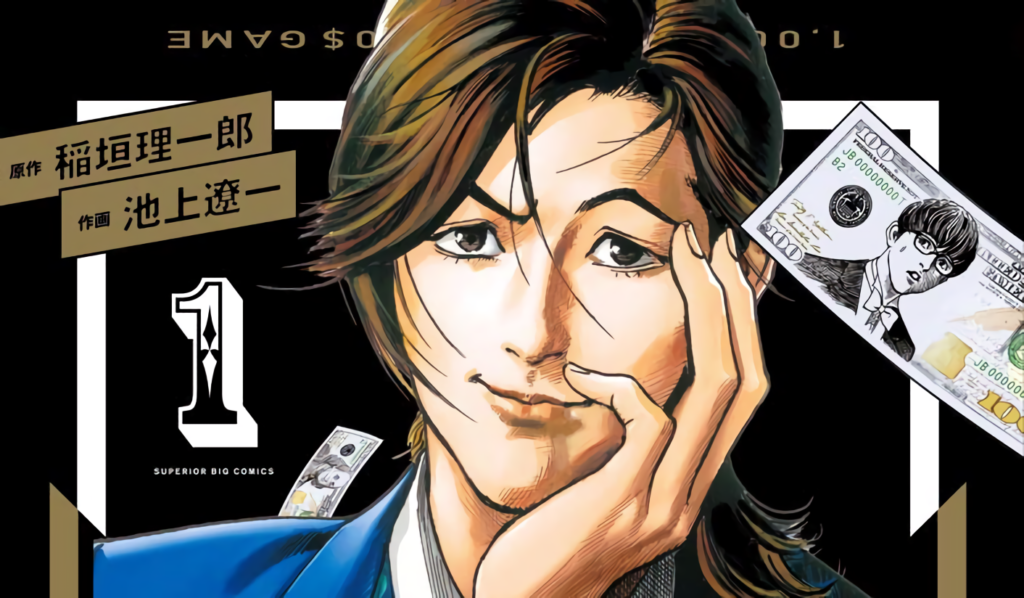 What does it take to build a trillion dollar company? According to Trillion Game, it’s a team effort, making for an enthralling manga experience underpinned by an unlikely partnership.

That’s right: Trillion Game is the first collaboration between Dr. STONE and Eyeshield 21 author Riichiro Inagaki and artist Ryoichi Ikegami, mostly known for the ultra-violent 80s hit Crying Freeman and the Spider-Man manga. As to how this even happened, I have no idea, but one thing’s for sure: it certainly is something to behold.

Even though Trillion Game is very much a story rooted in the modern day, there’s a strange sense of antique dissonance owing to Ikegami’s art. At one point in chapter 4, one of the protagonists, Haru, sets up a Zoom call to help his partner Gaku win a hacking competition: this is something that’s inextricably linked to the ‘now,’ mainly because of how the application was used during the COVID-19 pandemic. And yet, seeing Ikegami’s trademark detailed art style makes me feel like I’m reading a manga from the 80s all over again.

This isn’t necessarily a bad thing. If opposites attract in the combination between Inagaki’s story and Ikegami’s art, then the same goes for the story and characters of Trillion Game. Set in the modern day, it follows close friends Haru and Gaku as they attempt to make a trillion dollar company in the vein of Microsoft and Amazon. Like any good duo, their personalities are completely different: Gaku is a computer nerd, more comfortable in front of a screen than people. Haru, on the other hand, is an ultra-confident smooth talker with the ability to charm each and every person he comes across.

Chapter 1 highlights this difference well. Straight out of university, Gaku and Haru are doing what every student hates: job-hunting. After cracking under the pressure in several interviews, a post at the major financial institution Dragon Bank is Gaku’s last chance: even though the bank also happened to publish one of his favorite hobbyist magazines as a teenager, Gaku unfortunately isn’t able to get this passion across. Haru, meanwhile, manages to get the panel of interviewers laughing and on his side within seconds of walking in the room.

All but one, however. Company director Kirika (better known as ‘Kirihime’) manages to catch him out after pretending that he could speak several languages, which lays the basis for the story of Trillion Game proper. After getting the job, Haru attends the orientation ceremony, but bails out halfway through. ‘To hell with communication skills,’ he remarks, saying, ‘That’s a job for someone like me. I’ll take on an incomplete company like that: not from the inside, but by buying it up.’

Haru’s big idea is to create his own company through acquisitions that will combine his talents with that of his unsociable friend. Here, you start to see the trademark elements of Riichiro Inagaki’s writing: first of all, a headstrong protagonist. Much like Senku, Haru has complete faith in himself and his friends, declaring his selfishness to be ‘the biggest in the world.’ What’s more, the very first chapter features a roadmap: in this case, depicting how Haru and Gaku will grow their company, but very similar to Dr. STONE’s scientific roadmaps nonetheless.

Above all else, what lies at the heart of Trillion Game is the friendship between Haru and Gaku. When, in chapter 3, they eventually approach Kirihime to invest, she only agrees to do so since the two of them are teaming up: she understands that their different talents compliment each other perfectly. We see this most strikingly during the hacking competition, where Haru and Gaku are attempting to court other investors to outbid Kirihime’s aggressive offer: although Gaku is the only one who can actually do the hacking, Haru is the one who goes out there and makes 100 engineer friends to form the largest team.

There is a real sense that these two characters share a bond that can’t be put into words. We see how they come together at the beginning of the series, with Gaku using his hacking skills to get Haru out of some potential trouble after Haru saved him from getting mugged. The motif of Haru’s designer watch also comes in at multiple points throughout Trillion Game volume 1: he bought it when he turned twenty after saving up a bunch of money from his part-time job as a ‘once-in-a-lifetime’ thing, but he’s willing to sell it if it means getting enough money to put together the hacking team. He fully believes in Gaku’s abilities… and that faith is ultimately not misplaced.

In many ways, this is similar to one of Ikegami’s previous projects, Sanctuary, which followed a pair of protagonists with a deep bond forged in the Cambodian killing fields. The obvious difference is that Trillion Game isn’t nearly as dark, but there is an air of drama underpinning the whole thing: can Haru and Gaku’s friendship really stand the test of time? The story is actually told by way of a flashback, with Gaku moving into a flashy apartment some time in the future, but Haru is nowhere to be seen. Did a rupture occur along the way?

Only time will tell, but Trillion Game volume 1 is certainly a tantalizing introduction. No one in their right mind ever expected a collaboration between Riichiro Inagaki and Ryoichi Ikegami, of all people, but now that it’s here? I’m loving it.

Trillion Game volume 1 is out now via Shogakukan. The manga is currently serialized in Big Comic Superior.