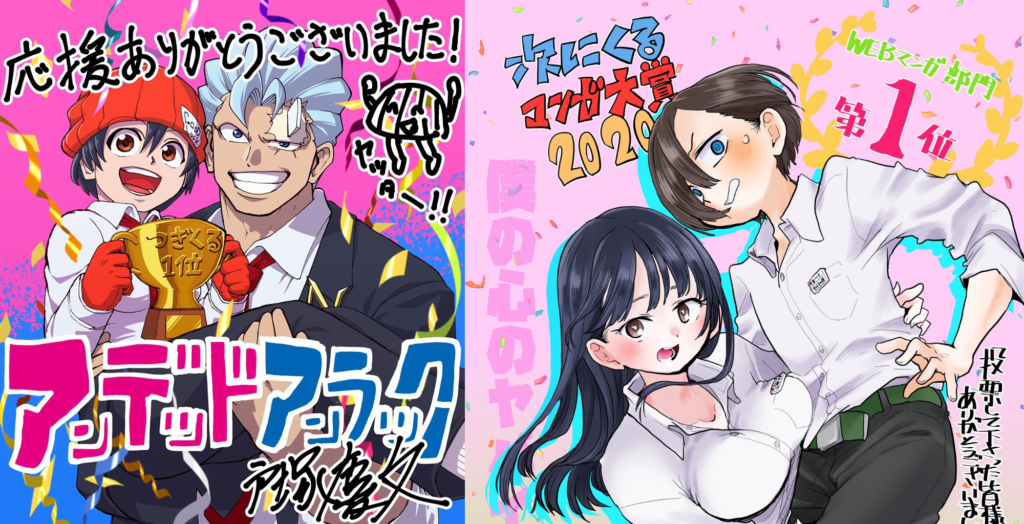 After a solid two months of fan voting, the results for the Tsugi ni Kuru Manga Awards 2020 are in. Divided into two distinct categories (print and web), these results are always of interest to us here at OTAQUEST as they do generally tend to predict which series are “up-and-coming” in the manga world. But that doesn’t mean that they should be taken entirely for granted, as we shall see.

Coming in at number one in the print manga category is Undead Unluck by Yoshifuma Tozuka. This rule-making and rule-breaking action series has been tearing it up in Weekly Shonen Jump as of late, and we’re very happy to see it take the top prize.

Bringing up number two and number three in the print category was Kimi no Koto ga Dai Dai Dai Dai Daisuki na 100-nin no Kanojo and Soredemo Ayumu wa Yosetekuru respectively. These two series have been gaining a significant amount of traction as of late, the former because of its outlandish premise and publication in Young Jump and the latter because of its cute antics courtesy of Soichiro Yamamoto. Both are definitely worth checking out.

Moving onto the web manga category, Boku no Kokoro no Yabai Yatsu by Norio Sakurai took first place. I’ll be the first to admit that I hadn’t heard of this series before looking at the results for this year’s Tsugi ni Kuru Manga 2020, but the live-action PV featuring Cocoro Toyoshima had me sold. Focusing on the “dark side” of adolescence, this series follows a young boy called Kyoutarou who mistakes his love for Anna as bloodlust. So yeah, normal teenage stuff.

Coming in at number two and number three in the web category was Hime-sama, “Goumon” no Jikan desu and Homura-sensei wa Tabun Motenai respectively. The former, serialized in Jump Plus, is quite high up on my list as it has been selling quite well as of late. The latter, serialized in various places but mainly Comic Essay, is one that I hadn’t heard of before but is now definitely on my list.

One of the best and worst things about plunging into the results for the Tsugi ni Kuru Manga Awards 2020 is the fact that you will find at least a dozen manga to add to your already overflowing plan to read list. Furthermore, while it is worth paying attention to the results, they are also affected by consumer bias – Tsurun Hatomune’s Mitama Security at number 13 shows this perfectly as it has already concluded in Weekly Shonen Jump.