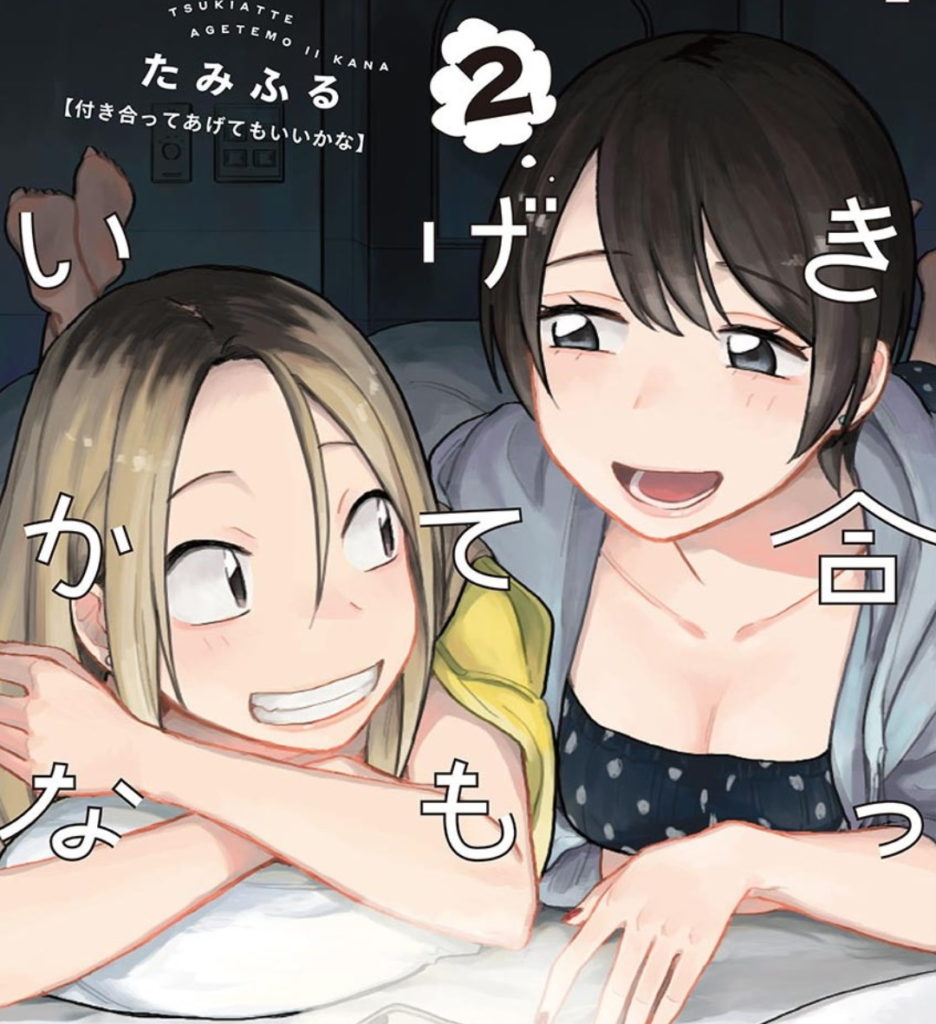 Romance manga, particularly yuri romance manga, have a problem. Tsukiatte Agete mo Ii ka na is here to solve it. In the yuri scene, there is an unfortunate tendency for authors to spend years, if not decades, created interesting characters and interesting relationships, only to have the story stop at the eventual confession. Just take one look at the current yuri king Yagate Kimi ni Naru (Bloom Into You) and you’ll see this problem taken to the extreme. 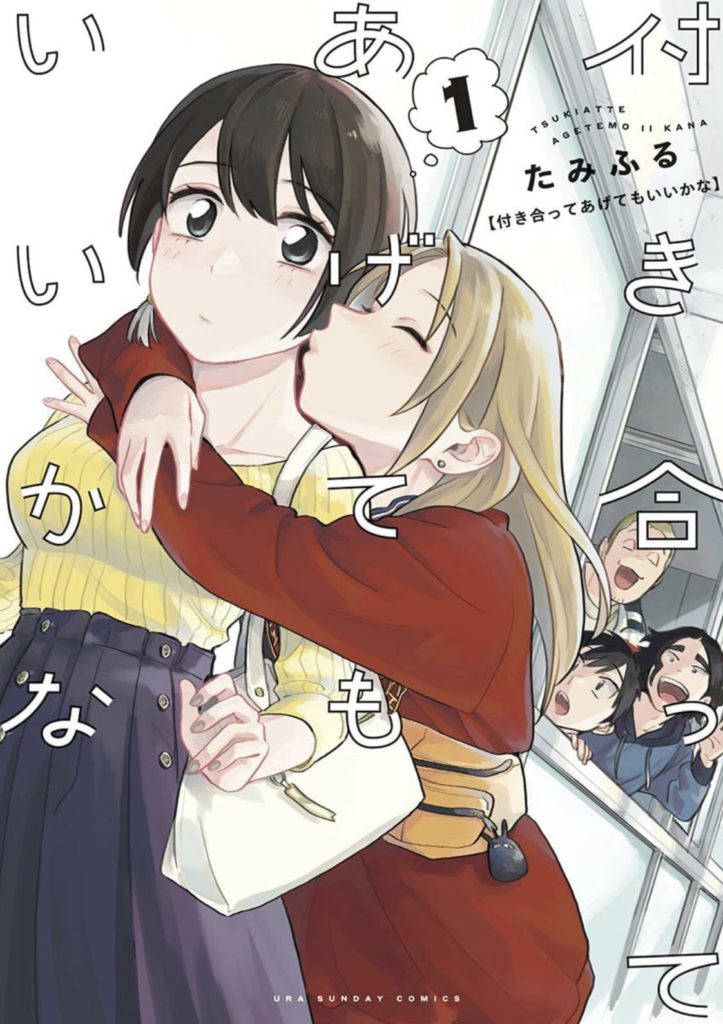 Tamifull’s new yuri series Tsukiatte Agete mo Ii ka na (So, Do You Wanna Go Out, Or?) is out to change all of that with its unique brand of yuri realness, which depicts a more fully formed and realistic romance, yet also ends up mirroring the complex nature of LGBT acceptance in Japan today. This might be a little different from what I usually cover in this segment, but it still warrants a conversation.

Tsukiatte Agete mo Ii ka na follows first-year college students Miwa and Saeko, who end up going out after drunkenly coming out to each other following a typical college ‘nomikai’ (literally: drinking party).

This premise is one of the first ways in which the manga seeks to break genre conventions and more closely represent the actual reality of a relationship. There’s no fairytale love here; just two people who end up going out with each other just because, despite not knowing all that much about each other. That’s pretty normal in reality, but ends up being pretty interesting in the story because of how unusual this type of relationship is in the yuri genre.

Even more unusual is the fact that Miwa and Saeko’s relationship doesn’t stop at the confession, like so many other yuri series before it. Rather, we’re invited to see how these two characters grow and develop within the relationship, as they come to learn more and more about each other, both for the better and for the worse.

Of course, this also includes the sexual side of their relationship, which thankfully avoids any sort of objectification or gaze by placing it within the character arcs of both characters despite being quite a regular feature in the story.

Author Tamifull’s insistence on representing the sexual just as much as the romantic is no doubt informed by their time in the yuri doujinshi scene. In fact, Tsukiatte Agete mo Ii ka na is actually based on a doujin that the author wrote in 2018 for a yuri doujinshi fair, during which they first came upon the realization that most yuri stories tend to stop at the confession. They thought that following the characters as they actually engage in a relationship might be interesting.

Through its unique brand of yuri realness, the series not only breaks conventions and stands out from an already crowded market but also ends up crafting a very interesting story that shatters the somewhat destructive notion of fairytale love and puts across the very powerful message that to truly love someone, sometimes you have to hate them as well.

That being said, Tsukiatte Agete mo Ii ka na is far from the first series to attempt to more accurately represent the reality of being in a relationship. This year marked the 20th anniversary of Hideaki Anno’s anime adaptation of Masami Tsuda’s His and Her Circumstances (Kareshi Kanojo no Jijou), which arguably popularized the concept long ago with the developing relationship of protagonists Yukino and Arima.

What makes Tsukiatte Agete mo Ii ka na unique is that it is a yuri story. As stated, most yuri series tend to forgo realism in favor of a more fairytale-like romance, leaning heavily into melodrama. Nio Nakatani’s Yagate Kimi ni Naru (Bloom Into You) is a great example of this.

Yet, there is another problem with many yuri series, including Yagate Kimi ni Naru, suffer from. Despite featuring romance between two girls, many of them fail to properly address LGBT issues, instead using it for seemingly aesthetic reasons.

Of course, YagaKimi does warrant some praise for its exploration of the issue of ‘practice dating’ through the character of Sayaka, but that issue stands mostly separate from the main story of Yuu and Touko. Furthermore, it’s a far cry from the very real exploration of changing perceptions of the LGBT community and the problems that still remain as offered by Tsukiatte Agete mo Ii ka na.

I’m talking about an evil, queer-hating antagonist or an unaccepting family, either. Japanese society has somewhat muted its attitudes towards the LGBT community in recent decades (even if such massive problems as the forced sterilization of trans people still remain); a fact which is reflected in the attitudes of those around Miwa and Saeko.

When Miwa and Saeko’s new university friends find out that they are dating, their reactions are not one of shock or disgust. If anything, they’re just mildly surprised and mostly supportive, with only a handful of them ever bringing it up again. Their families are also pretty supportive, if in their own way.

If anyone has an adverse reaction to Miwa and Saeko’s relationship, then it’s Miwa and Saeko themselves. Years of heteronormative social conditioning have taken their toll on both Miwa and Saeko, leading to many instances where their first instinct is to deny their relationship and instead insist that they’re ‘just friends’ in order to save them the hassle of having to ‘come out.’

This mirrors the very real situation that many of the LGBT community face in Japan today, and even international audiences will surely find enjoyment in Tsukiatte Agete mo Ii ka na’s unique brand of yuri realness that explores the reality of living as a member of the LGBT community.

That’s not to say that Tamifull’s story is one of dry, documentary-like reality; it’s still an entertaining yuri manga that isn’t afraid to use some melodramatic, over-the-top elements. One good example being the aloof Kan, who just really hates Miwa and Saeko for the sake of dramatic tension.

I’m willing to bet that many western fans will end up loving Tsukiatte Agete mo Ii ka na, if not just for its unique appeal and poignant theming, but simply because there seems to be an appetite for more ‘real’ yuri stories at the moment, as signified by the success of My Lesbian Experience With Loneliness.

The series is currently serialized via Shogakukan’s online Ura Sunday, with two collected volumes currently published as of the time of writing. No official English translation is available just yet, but I wouldn’t be surprised if we saw such an announcement in the near future.