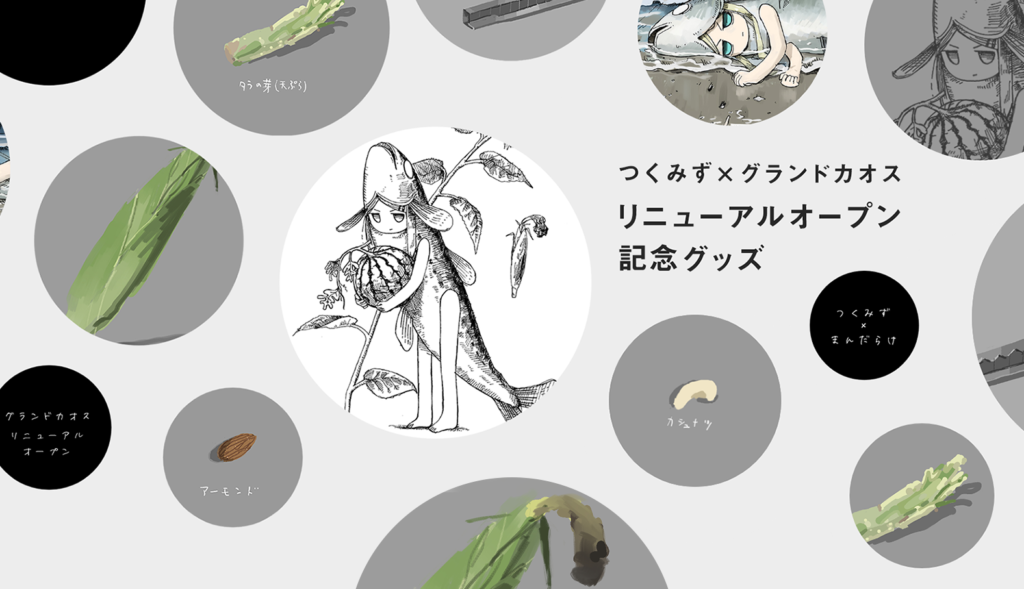 If there’s two things I love more than life itself, it’s Mandarake and Tsukumizu. To see them cross over, then, is like a dream come true.

Mandarake Grandchaos is moving to a new location in Nihonbashi from Shinsaibashi in Osaka this December, with the aim of making it into a new hub for all things Mandarake in the Kansai region. To celebrate this, Girls’ Last Tour and Shimeji Simulation creator Tsukumizu has put together a series of designs for t-shirts and the like, available to purchase from Grandchaos for delivery all around the world.

The Grandchaos goods in question include three t-shirts and three transparent seals, all of which feature some of Tsukumizu’s favorite things: fish, random food items, and depressed girls. Truly, I don’t think you could put together a more idiosyncratic collection if you wanted to.

Given that these Tsukumizu goods are being sold through Mandarake, they are very accessible for overseas fans. Through my many orders with the retailer over the years, I have never had a single problem with them – except for when my package is too heavy, which is when DHL or the like charge through the roof. But that’s not necessarily Mandarake’s fault, but the perils of ordering from Japan.

Speaking of ordering, orders are open now for the Tsukumizu Grandchaos collection via the Mandarake website. Hurry, however, as payment is required by November 9 – if you don’t pay by then, then you won’t receive the goods. The packages will then be sent out after December 8.

According to the official website, there will also be an exhibition in the new Nihonbashi store from December 12, which is a great way to kick things off. It will run until December 20. We don’t have many details on it, however, other than that the rough sketch of the t-shirt designs will be on display, so keep your eye on the official Twitter for more details.

Mandarake Grandchaos to move to new location in Osaka

other Isaac Wong 5 years ago