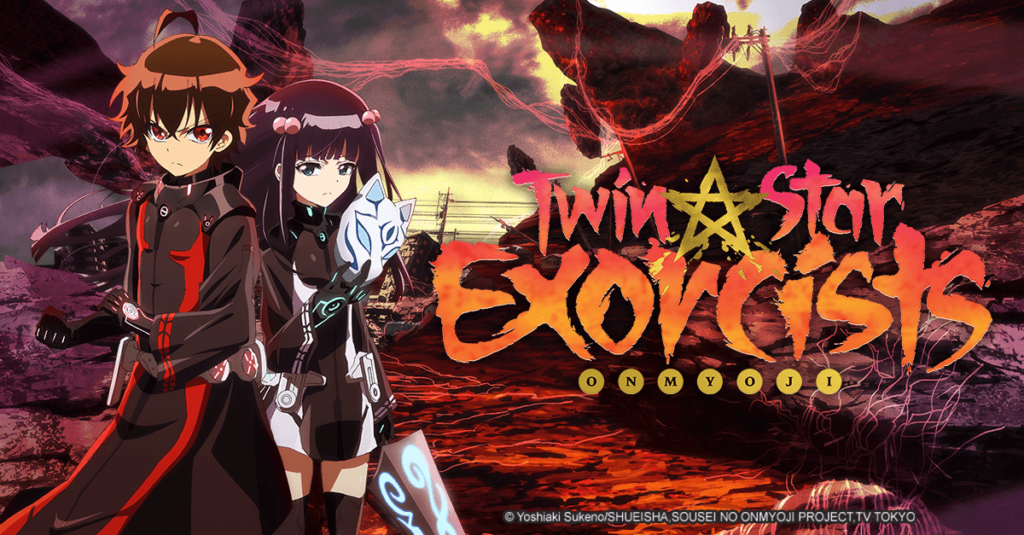 Almost a romance, fully action/adventure fantasy, if you need an anime to watch that’s funny, gets your blood racing, and your heart warm, then Twin Star Exorcists is the one for you!

At fifty episodes in season one alone, it can be a pretty big time commitment if you don’t know what you’re getting into. So here is everything you need to know about Twin Star Exorcists and why you should watch it.

The “twin star” in Twin Star Exorcists refers to two exorcists bound together by fate. But who are they? Who put them together? And who is everyone else in their world?

In a universe similar to ours called Magano, evil beings exist called “Impurities.” They are purified by exorcists who are highly trained to protect people.

Rokuro Enmado absolutely does not want to be an exorcist. Although he aspired to be a great exorcist as a child and worked towards that dream, a traumatic incident from his time in training turned him off of the career.

However, he has the talent and skill to excel at it, along with the deep-rooted desire to be there for those who need protection, and it gets him back in the game. An oracle gives him the title of “twin star exorcist,” typically reserved for married couples.

The other half of the “twin star exorcist” pair is Benio Adashino, a girl driven by revenge, determined to wipe out all of the Impurities from the world.

Together as the twin star exorcists, it is prophesied that they will get married and have a child known as the “Miko.” The Miko will be able to cleanse all of the Impurities from the world and end the conflict that has been going on for a Millenium.

Twin Star Exorcists follows Rokuro and Benio, along with all of the other characters, as they meet and work together increasingly as a team as they fight more and more battles with the Impurities and come to accept their destiny together.

Is Twin Star Exorcists Adapted From A Manga?

it did indeed come from a manga originally, written and illustrated by Yoshiaki Sukeno, which began its run in October 2013 and is still going strong today.

The manga has been serialized in Jump Square magazine. In North America, it is published by Viz Media; you can preview some chapters and buy volumes on their website.

Twin Star Exorcists the TV show obviously wasn’t able to perfectly copy the manga since it hasn’t ended. The first twenty episodes are pretty close adaptations of story arcs from the manga, though. The anime-exclusive content begins around episode twenty-one and continues for the rest of the series.

In addition to this adaptation from the manga as an anime, there is also a video game, three light novels, and two manga spin-off series.

And, while it’s not an adaptation, there’s a lot of Twin Star Exorcists-related stuff to be found in the work of Hitomi Kaji, the musical artist who collaborated with Wagakki Band on the first opening theme, “Valkyrie -Ikusa Otome-” (Valkyrie -戦乙女-, meaning “Valkyrie -War Maiden-) and performing the first ending theme, “Eyes” (アイズ).

As of right now, there is no official season 2 in the pipeline for Twin Star Exorcists fans. Although there’s hope since the franchise is popular enough to still be in progress that one will come through soon, or just after the manga ends!

In the meantime, while it’s not quite the same as a second season, the one season that does exist is fifty episodes long, meaning we all at least get two seasons’ worth of content.

Twin Star Exorcists – Where to Watch

You can also buy the series on Amazon Prime. (Don’t be confused by the “season 2” listed on there – Amazon divides the fifty episodes into four seasons to be purchased separately. There isn’t any extra content to be found, unfortunately.)

Or, if you prefer non-streaming options, you can also buy the series in four parts on blu-ray directly from FUNimation, or on Crunchyroll, or Amazon.

If you enjoy a good series about destiny, magic, and adventure, with a well thought out world that you could spend hours diving into, then you can’t go wrong with Twin Star Exorcists! Exciting, emotional, and fun, it’s an anime well worth anyone’s time.