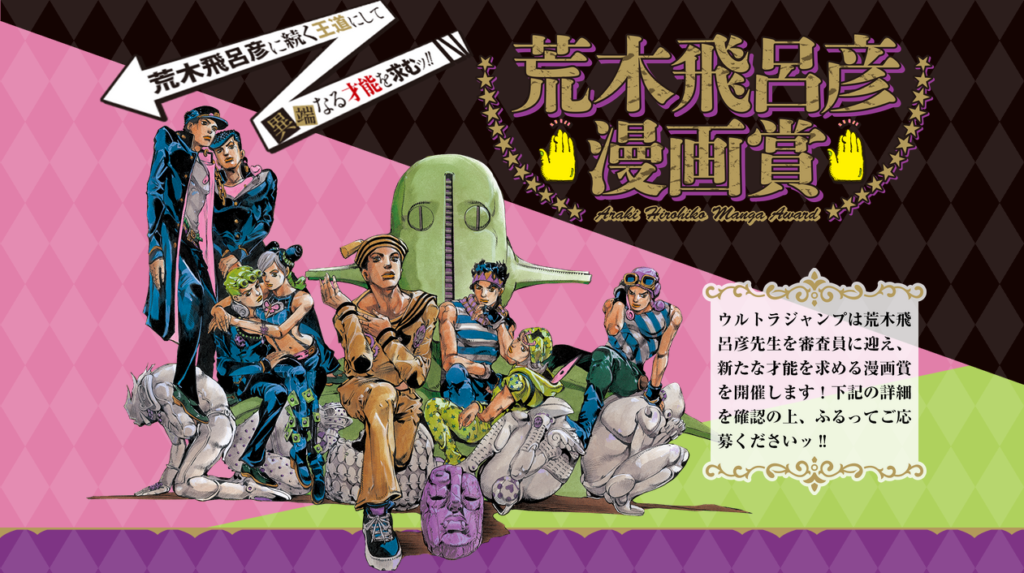 Monthly seinen magazine Ultra Jump has launched a new manga prize: the Hirohiko Araki Manga Award, tasking the JoJo’s Bizarre Adventure creator with judging it. While the prize’s aim of recruiting those who ‘have the heretical talent to follow in the noble path of Hirohiko Araki’ might be a little lofty, it undoubtedly boosts the magazine’s profile and encourages new creators to try their luck. It’s Araki, after all.

The Hirohiko Araki Manga Award targets creators under the age of 40 and is requesting unpublished original material, meaning no doujinshi or works that has been published in other magazines before. Given that Araki has tackled many different genres across his career (horror, suspense, battle, action) creators are encouraged to submit works of any type. The JoJo creator will sit on the judging committee alongside the Ultra Jump editor-in-chief and other staff members from the editorial department.

Winning the Hirohiko Araki Manga Award will not only net you a serialization in Ultra Jump, but also one million yen and a reproduction manuscript set from JoJo’s Bizarre Adventure Part 8: JoJolion signed by Araki. The runner-up will also win 700,000 yen, a serialization in either the paper magazine or the website, and a monochrome reproduction genga set signed by Araki. Submissions are open now until 31 August.

In general, it’s no surprise to see Araki brought on board for something like this: while his career originally started out in Weekly Shonen Jump, he’s been a mainstay of the Ultra Jump roster ever since JoJo’s Bizarre Adventure Part 7: Steel Ball Run transferred there partway through its run. Lending his name to the Hirohiko Araki Manga Award, therefore, feels like a natural evolution of his standing within the magazine.

Rumors have been swirling for a while now, however, that JoJolion might be the last JoJo part: Araki’s sixty years old now, after all, and he’s been working pretty much non-stop for the past 40 years. Might the Hirohiko Araki Manga Award be a way for him to transition his role in the manga industry from creator to mentor and advocate, just as Osamu Tezuka did in the past?

Whatever his intentions, his legacy will remain intact. You can read more about the Hirohiko Manga Award via the official website.