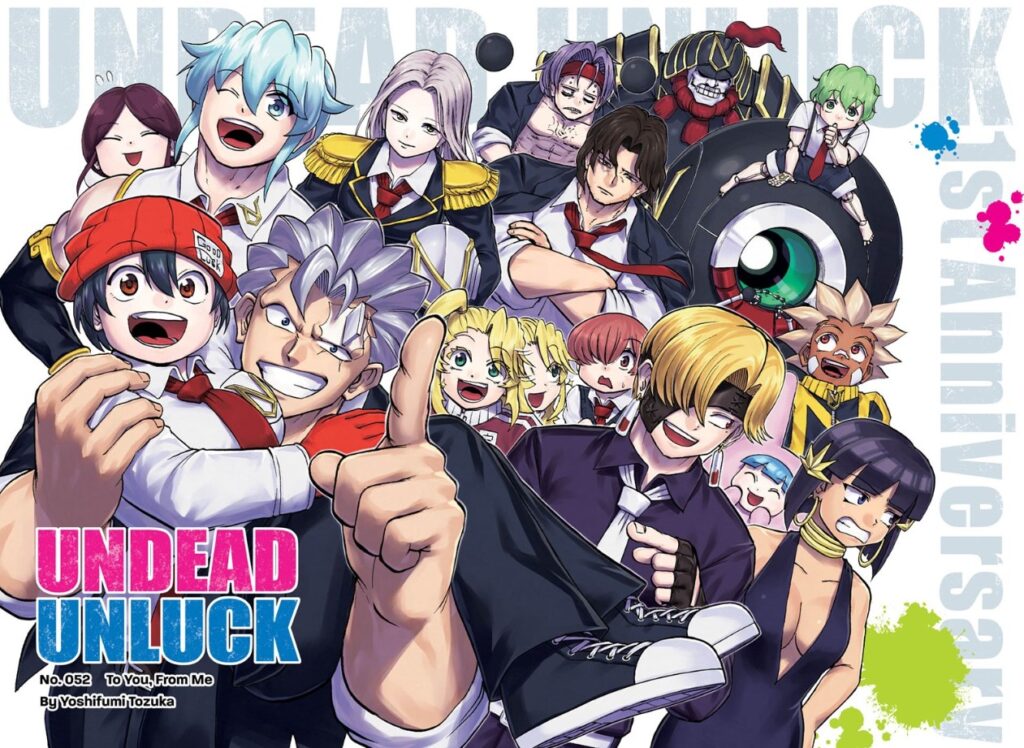 Back in my initial review of Undead Unluck, I warned Yoshifumi Tozuka that his writing style might leave the series with little room to develop in the future. More specifically, I was worried that his insistence on tying up major plot threads and introducing new ones in equal measure might sap the overall narrative of momentum, but I can probably put it a better way upon reflection: Undead Unluck often has more ideas than it knows what to do with, resulting in uneven stories like the ‘Autumn’ arc.

Contains spoilers for Undead Unluck up until chapter 52.

On the whole, Undead Unluck’s Autumn arc is good. The story surrounding the character of Anno-Un, in particular, is downright transcendent and makes him into perhaps one of the best single characters introduced in Weekly Shonen Jump in the past couple of years. Even so, this arc is also perpetuated by several peaks and troughs that are emblematic of Yoshifumi Tozuka’s overall writing style. He often leaps from one idea to another like an excited child.

If Undead Unluck is succeeding, then it is doing so in spite of these flaws. Not by solving them. 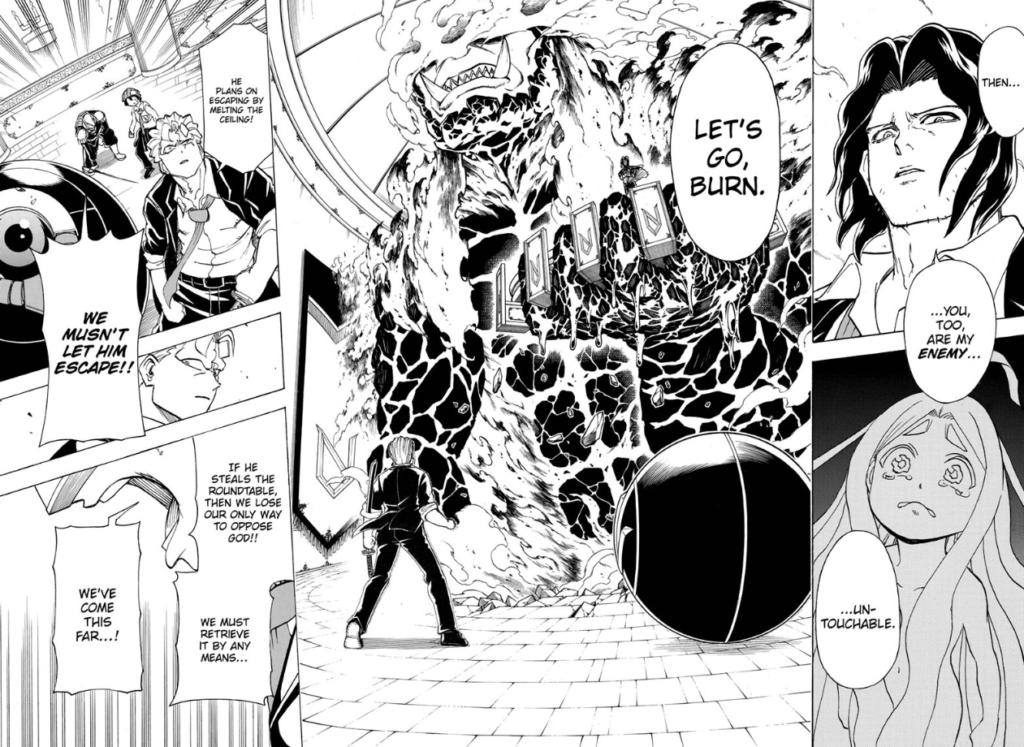 The Autumn arc starts out very unevenly with Billy’s betrayal and the theft of the Roundtable from the Union. In theory alone, this probably wasn’t a very good idea: we had spent basically no time with Billy prior to this, meaning that the reveal that he was the head of Under lacked a proper emotional response. Even his past relationship with Tatiana wasn’t brought up until it was needed, so it all felt a little underwhelming.

What’s even more confusing is that when Billy and Under eventually do manage to steal the Roundtable, it turns out that there’s another one. In chapter 54, Juiz summons a Roundtable that’s ‘Japanese-style,’ begging the question of why they were so desperate to get it back in the first place. If the objective was actually to steal back Apocalypse, then this should’ve been stated from the beginning, because Fuuko’s call to capture it only seemingly came about because of her independent quick thinking.

It’s true that Billy’s betrayal doesn’t technically fall under the Autumn arc: the Undead Unluck wiki, at least, has it labelled as part of the Unbelievable arc. Even so, you can’t really discuss the Autumn arc without talking about it: everything that happens there, after all, ultimately serves to establish the conflicts with the four UMAs named after the four seasons that are still ongoing.

Many of the things mentioned so far are also minor nitpicks, but they sure do start to pile up when looking at the series as a whole.

In any case, things do start to get a little better for Undead Unluck when Anno-Un is introduced to the Autumn arc proper. Sending Fuuko into Andy’s past provides an opportunity not just for power progression, but also a deepening of their relationship: we shouldn’t forget that the romance between these two characters is just as important to the story as the eye-catching action. Even so, this is preceded by a very self-serving segment where Fuuko writes her own manga.

Why would Andy know or even care to know how to write manga? That’s the question that’s been bugging me ever since he mentored Fuuko through the process of creating a one-shot and bringing it to SHUEISHA headquarters. Perhaps living for hundreds of years does something to your sense of societal norms, but I’m pretty sure that such an outrageously masculine guy as Andy wouldn’t want to be associated with manga. To be honest, it feels a little out of character and almost like Yoshifumi Tozuka wanted to do something that appealed to his experiences, consequences be damned.

Back to the good stuff. The flashback to Andy’s past also provides a fantastic opportunity to dig into Victor’s past and discover why he is the way he is: in doing so, it transforms this otherwise monolithic antagonist into someone intensely human, someone you can relate to. There is power in having sympathy for the villain, so it’s excellent that Undead Unluck was able to evoke this through the Autumn arc.

It’s only when Fuuko and Andy come out of his past that we actually get to spend some time with Anno-Un proper: prior to this, he was on the outside, trying to prevent Rip from disturbing the two characters. His story is at once tragic and transcendental, hitting at the heart of why we read shonen manga and why Yoshifumi Tozuka does what he does. 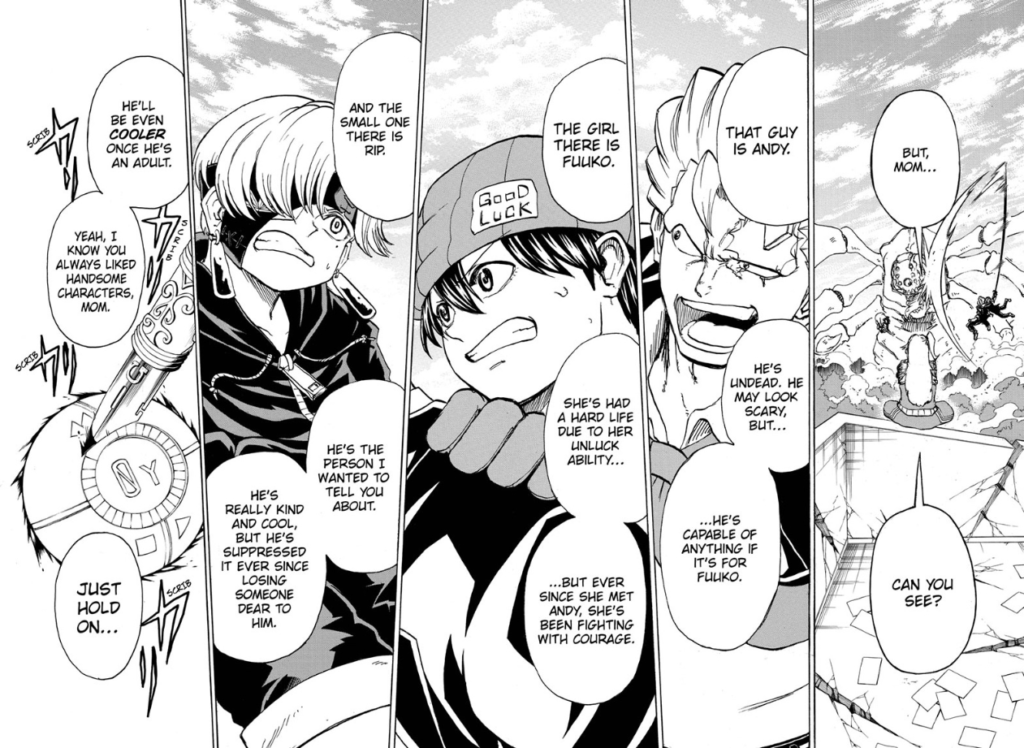 As a young boy, Akira Kuno loved to draw manga for his mother. One day, he found a mysterious pen that allowed him to see into the future: the cost of which, however, came in never being seen again. Even though his head was filled with wonderful ideas and characters like Undead and Unluck, Unknown meant that he wasn’t able to bring them to life unless he used a pseudonym. Even at the end of it all, his mother never realized that her son was actually alive and well.

Luckily, Anno-Un does find some salvation in the Autumn arc. First of all, he prevents Unseen from assassinating Fuuko, thus averting the end of the world. He was also able to bring Unrepair to the light for just a second, teaching him the value of heroism. Without him, none of this would have been possible, making characters that we love into ones that Anno-Un ‘created.’ The argument that he is an author self-insert is therefore very convincing.

Even so, it’s far deeper than that. When the narration remarks in chapter 52 that ‘The boy had no regrets. For he had already told all that needed to be told,’ you can’t help but feel like Yoshifumi Tozuka is telling us why he does what he does: if he can provide strength to someone for even just a second, then it’ll all have been worth it. This also hints at something that Undead Unluck constantly dwells on throughout the Autumn arc: when do we die? Is it when we leave this mortal coil, or is it when our memory disappears from this world?

Fuuko thinks it’s the latter, managing to convince Andy of the same during the escapades in his past. This leads to the teary conclusion where the narration says ‘Even if no one could actually see him, so long as there were people who remembered him, he would be right there.’

We may leave this world, but our art lives on. 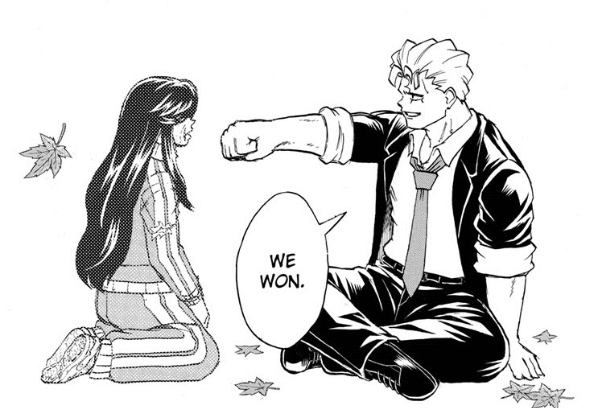 Somewhere within the tangled mess that is Undead Unluck’s Autumn arc, there is a story that could’ve gone down in Weekly Shonen Jump history as one of the best arcs ever. If Billy’s betrayal had been better prepared for, if the idea of making a manga fit in better with Andy’s character, then this could’ve gone alongside the excellent exploration of his past and the transcendental story of Anno-Un.

As it stands, however, the Autumn arc is an ambitious story with all the flaws that make Undead Unluck, well, Undead Unluck. Would I have it any other way? Absolutely not.

You can read Undead Unluck for free via VIZ Media. Don’t forget to check out the tag Jump Time for more weekly manga coverage!