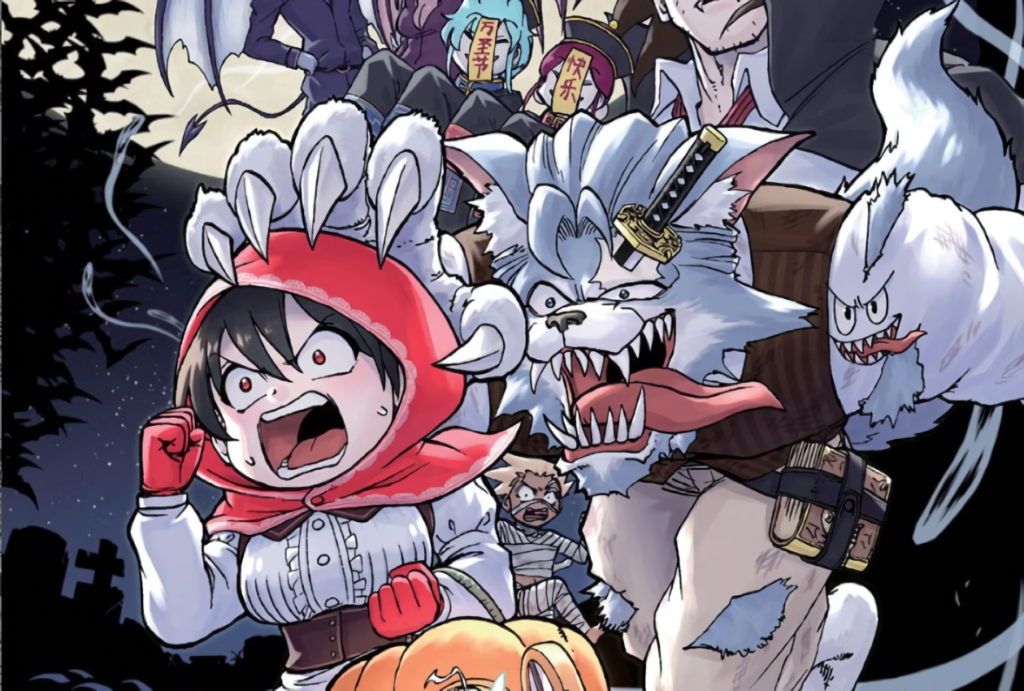 The beginning of a new week can only mean one thing: time for new Weekly Shonen Jump! Shueisha’s legendary manga magazine has been releasing every week for over 50 years at this point, and it still has enough exciting series in its roster to justify its hallowed status. Plus, with VIZ Media now publishing the entire thing in English, there’s never been a better time to jump in. In this column, Jacob investigates the latest and greatest in the world of Weekly Shonen Jump, telling you what’s worth your time and what’s not. This week, we’re chatting Undead Unluck chapter 38, Magu-chan chapter 18, and Dr. STONE chapter 172.

What a great week! While I was a little stuck for ideas last time, there were countless chapters this week that deserved to be highlighted, so we’re spoiled for choice. Still, I hope that this spread is nice and varied and also matches the mood of the season, which is getting browner and browner. In other news, there’s been a lot of talk about Chainsaw Man ending as of late – something which shouldn’t come as much of a surprise to anyone who has been keeping up with the manga, but hey ho. I have no doubt that Tatsuki Fujimoto will be back very soon with a new series that is even better.

Halloween color page! That’s enough to imply that Undead Unluck chapter 38 has anything to do with Halloween in the title, right? (Listen, none of us got to celebrate Halloween properly this year and I’m just angry that I didn’t get to do a costume. So take the reference and leave it. Kapiche?)

Anyway, what Undead Unluck chapter 38 is actually about is the continuing mystery of You-Me, Fuuko’s favorite manga that may or may not be a Relic that can tell the future. Unfortunately, this interesting concept comes off the back of some very bizarre setup and an arc that has, on the whole, struggled to find its feet – luckily, Undead Unluck chapter 38 puts it right.

The idea of transforming Fuuko into a mangaka and having her infiltrate the Shueisha offices in search of original manuscripts was a bizarre one, and one that also felt a little too self-gratifying given that the series is published in Weekly Shonen Jump. Nevertheless, Undead Unluck chapter 38 does us a favor on this one, moving swiftly away from Shueisha and into a meeting with Anno-Un. 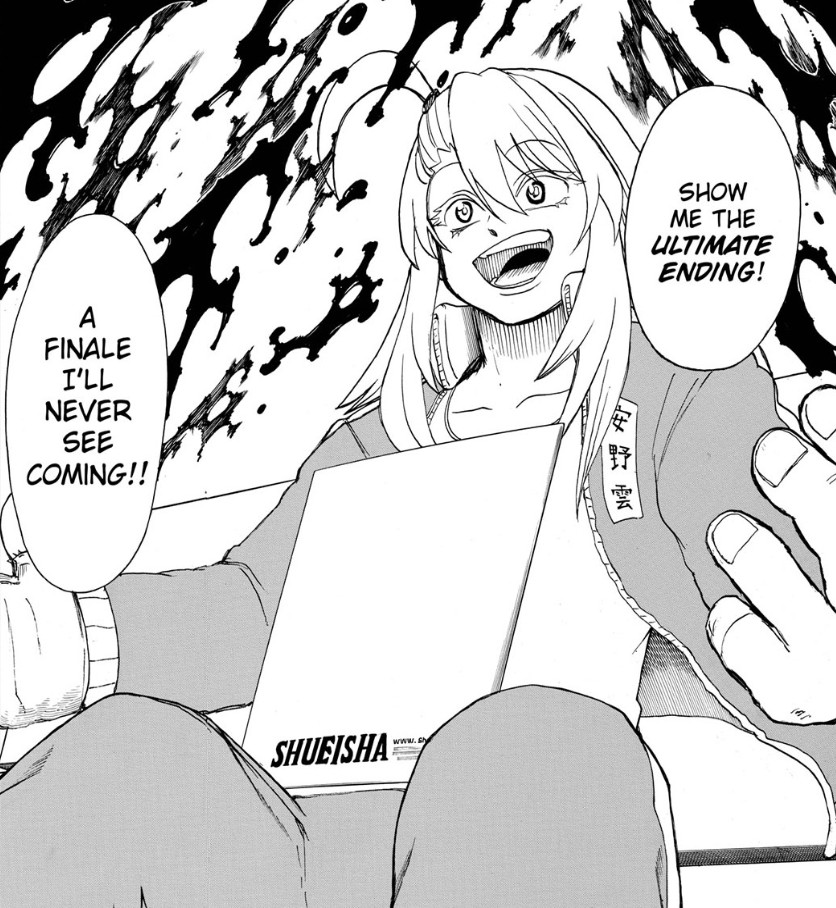 The introduction of Anno-Un – the author of You-Me – is by far and away the best part of Undead Unluck chapter 38. Not only does it put a face to a name that has been floating around the series since the very beginning, it also makes all of the previous haphazard setup worth it – because Anno-Un is really, really cool.

As soon as they dished out their drawing ability (not sure on the gender yet), I got serious Kishibe Rohan vibes and only later realized that this is probably a large source of inspiration for Yoshifumi Tozuka. After all, are there any other Jump manga play around with words and meaning as much as JoJo’s Bizarre Adventure? Far from just fitting an archetype, Undead Unluck chapter 38 is probably an indication that we can expect to see more madness along the lines of Hirohiko Araki’s long-running series sometime in the near future.

In any case, Undead Unluck chapter 38 is also home to a bunch of other great character moments, most notably between Andy and Fuuko. As someone who enjoys poutine, I greatly appreciated its inclusion in the scene in Stanley Park, as well as the Vancouver skyline. The scene where Fuuko threatens the Shueisha employee is also hilarious, as it contrasts so well with what she is saying. There’s also a fairly large bit of character development in there, as I doubt the previously meek and mild Fuuko would have the guts to do that. Simple but effective. 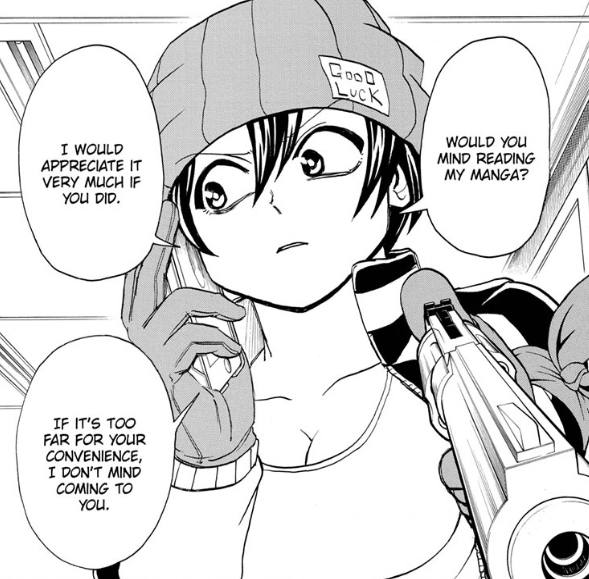 To be honest, I went into Undead Unluck chapter 38 with fairly low expectations. I hadn’t enjoyed the setup from previous chapters, and the haphazard nature of the story wasn’t shaping up to get any better. I’m very happy to report, though, that this week’s chapter has me fully back and board – it’s ride or die, baby.

One last thing. The skeleton spiders that appear at the end of Undead Unluck chapter 38 are, according to Anno-Un, part of UMA Autumn’s “territory,” which gives us a taste of what one of the four main opponents for this arc is like. If I had to make a guess, then I’d have to say that the different “seasons” summon minions in accordance with the different climates – so spiders for autumn, as the cold forces them inside before dying out in the winter.

With that in mind, might Summer’s ability be to summon a cloud of giant killer hornets? That would be a plot twist to mirror reality and a half.

Good news: Magu-chan chapter 18 actually has something to do with Halloween. That means I don’t have to bend over backwards to make the seasonal connection, unlike with Undead Unluck chapter 18. The bad news? Halloween is already over, and we’re three days into November. Bummer.

Still, if the Monday after Halloween is good enough for Weekly Shonen Jump to celebrate, then it’s good enough for me. It doesn’t even matter, anyway – as Magu-chan chapter 18 points out, it’s only really a thing for young kids and party people in Japan. In fact, that is what this chapter is all about.

Magu-chan chapter 18 opens with Magu staring down a Halloween pumpkin and wondering what it is for. This sends Ruru and her friends down a rabbit hole to discover the true meaning of Halloween – something which they don’t really understand, given that they live in the countryside and are Japanese. 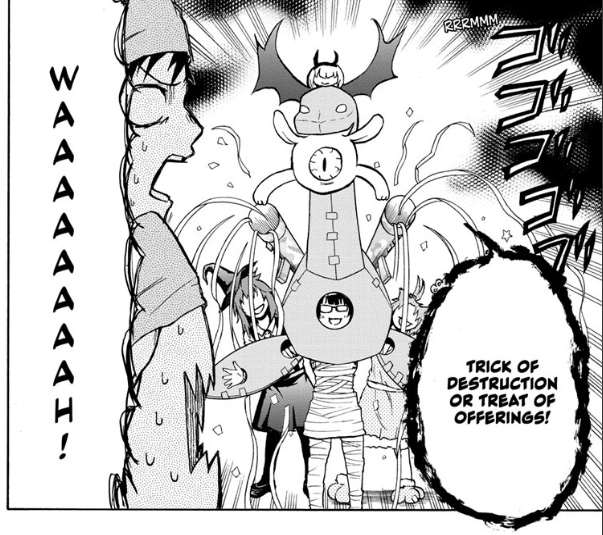 For Yuika, it’s all about scaring people and going down very hard on one side of the old adage “trick or treat.” For Kyo, it’s all about dressing up as something you like – in her case, the “unidentified mysterious animal, Classy.” We would have nothing less.

Unera is probably the only character that understands Halloween best in Magu-chan chapter 18, as she dresses up as a devil and pays the Occult Club a visit. But even her view of the holiday is warped by consumerism: in her usual otaku ways, she’s more preoccupied with the “limited edition halloween costumes you can score in mobile games.” That’s certainly one way of looking at it.

Ren doesn’t participate in the Halloween proceedings, as he’s too busy with work, but gets roped in anyway at the end of Magu-chan chapter 18. In many ways, that final scene at the restaurant is what Halloween is all about: having fun together with your friends, dressed in stupid costumes and letting loose for that one night of the year. 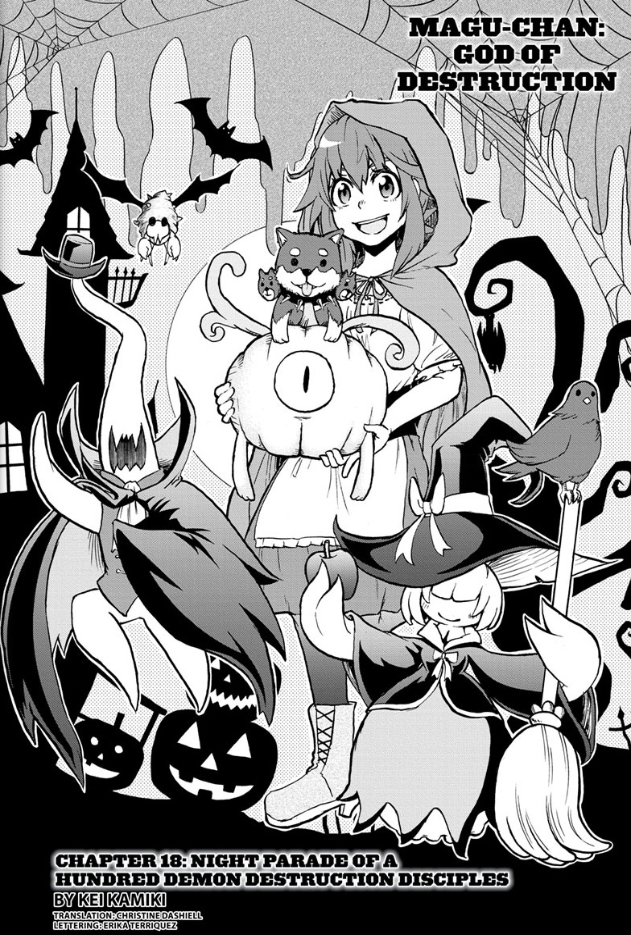 In this sense, Magu-chan chapter 18 functions as a surprisingly wholesome encapsulation of the celebration, as well as a useful point of cultural reference. If you venture into the Japanese countryside, you will really come across people who have no idea what Halloween is – as well as Christmas, for that matter. This can be interesting to consider when we, no matter how hard we try, end up taking our own culture and celebrations for granted.

Magu-chan chapter 18 also caps off with a surprising bit of character development. Not only did Ruru manage to make Ren’s heart skip a beat once again, Napu is also making steps towards becoming a proper chef – the puddings that he made tasted pretty good, even if the texture was a little bit off. That’s always been one thing that has surprised me about this series: ever since the move to school in chapter 11, Kei Kamiki has never been afraid to move the story and his characters forward. A never-ending circle this is not.

Finally, we come to Dr. STONE chapter 172. I know, I know: I spotlighted chapter 171 last week, and chapter 168 not long before that. So shoot me – I’m really enjoying this current arc. It makes a change from getting frustrated with the fight against Minister Ibara, that’s for sure.

If I had to explain why this latest arc of Dr. STONE is proving so much better than some of the others, I’d probably put it down to characters. To be frank, Ibara was a pretty boring character: he was just one of those creepy old dudes that we’ve all seen 1000 times before, even if he had quite an overwhelming presence. Xeno and others are different. Not only are their personalities more interesting, they also have an interesting philosophical current underpinning them – more on that in a future piece.

In any case, Dr. STONE chapter 172 picks up where last week left off, with Senku and Xeno putting their heads together to find out where the petrification beam came from. Landing on the “upper reaches of the Amazon river,” the crew set off for South America – with Stanley trailing not far behind.

The impending doom of Stanley’s pursuit was one of the elements that had me most excited for this upcoming ‘Superalloy City’ arc, as it added so much danger and tension – it was only a matter of time before Stanley’s modern, oil-powered boat caught up to Senku and crew’s primitive, charcoal-powered one. Dr. STONE chapter 172 neatly sidesteps this, but does so in an engaging way: introducing yet another new character. 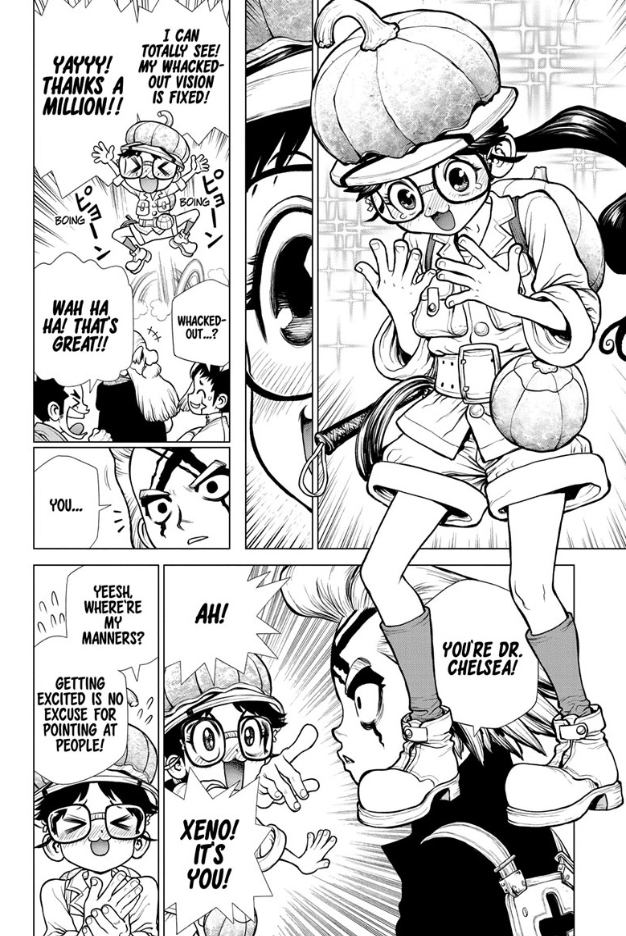 It’s honestly a testament to the quality of Riichiro Inagaki’s writing that, in the past couple of chapters, he has introduced some of the best characters he has ever written: Xeno, of course, but also Stanley and now Dr. Chelsea. This small, bespectacled genius geographer already made me weak at the knees on account of her appearance alone (I have a type) but also how she solves the looming Stanley issue: by using her knowledge of the Amazon, she is able to come up with a route that will allow Senku and crew to outrun their pursuer and cross the jungle in record time. 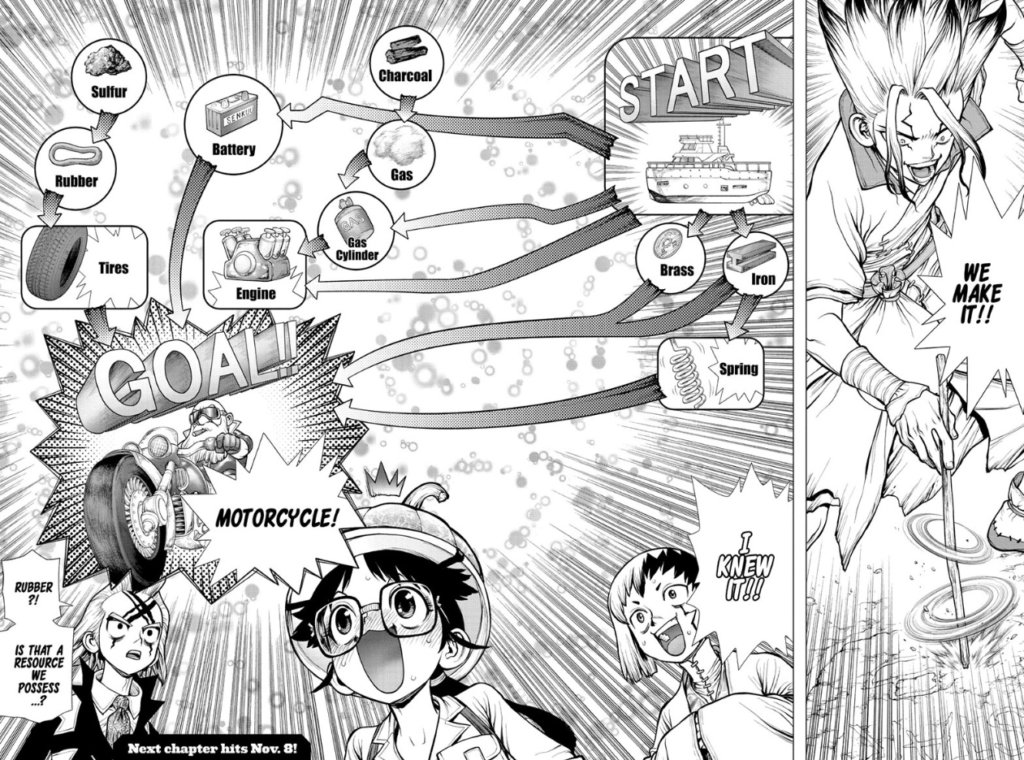 The only problem is that they’ll need a new vehicle to do so, but this just gives Dr. STONE chapter 172 an excuse to dish out an old-fashioned scientific roadmap. It’s not as if this development came out of nowhere, either: Xeno explains that she was one of the scientists invited to his summit to discuss the petrification, and was in the middle of tracking down its origin with the help of Senku’s data when the beam hit. She also suffers from the same “fuzzy eye disease” that Suika has, tying her neatly into everything the series has established up until this point.

In reality, Dr. Chelsea’s introduction was probably not planned from the beginning, but has been made to appear so with the same kind of clever writing techniques that Riichiro Inagaki employed for Xeno. The result is much the same: another fantastic character that I am very excited to see more of in the future.

That’s probably a good thing, too, as Dr. STONE chapter 172 starts off with a dramatically reduced cast. Leaving behind such key characters as Yuzuriha and Ginro in America was a bold move, but one that just might pay off if Inagaki can play his cards right. The only way is up.