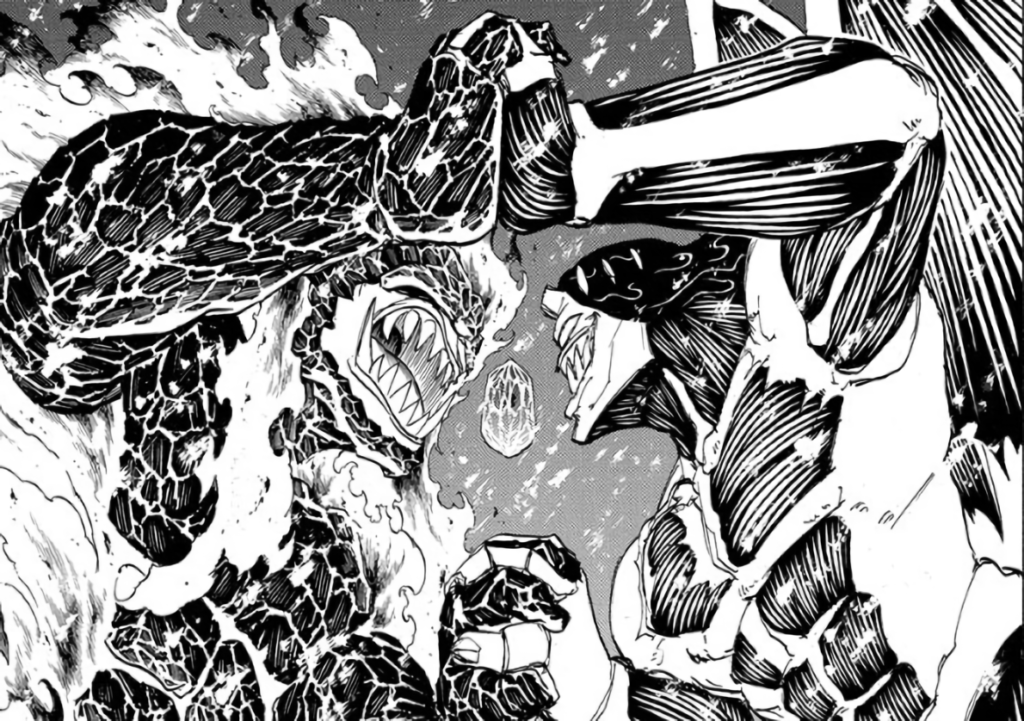 The beginning of a new week can only mean one thing: time for new Weekly Shonen Jump! This is where Jacob investigates the latest and greatest in the magazine, telling you what’s worth your time and what’s not. You can find coverage of other series under the tag Jump Time. Here’s Undead Unluck chapter 55.

Now that Anno-Un’s story arc is done and dusted, it’s time for Undead Unluck to move on and explore a new set of characters: Billy and Juiz. This is particularly significant given how much we learned about Juiz’s past during the fight with Victor, and how many questions remained unanswered once Billy turned out to be a traitor and stole the Round Table. Undead Unluck chapter 55 only answers some of those questions, but does bring back an old character for the ride.

That’s right: Spoil is back! We haven’t seen him since he was pacified by Chen at the end of the Spoil arc, and I honestly never thought we would: this series didn’t seem like the type to play on the old ‘foe turned friend’ trope, but here we are. His inclusion in Undead Unluck chapter 55 isn’t just for old time’s sake, by the way: he reveals some important information about the nature of UMAs and their creator, God.

When Burn remarks to Spoil that he wants ‘to meet them [God] at least once,’ he lets slip that UMAs don’t have any childhood memories and that the only thing they can recall is one order: ‘Use your rules to make humans suffer.’ Given that God supposedly made the UMAs, you have to wonder: what kind of fickle god is this? What’s their aim? No doubt we’ll learn this at some point in the future, as the Union’s overall objective is to kill their creator.

Moreover, Spoil says that ‘concept-types’ are always looking down on ‘phenomenon-type’ UMAs such as Spoil and Burn, as they’re ‘God’s favorites.’ This is how Juiz managed to force Spoil to assist her in the fight against Billy to counter Burn, but you have to wonder: does this mean that Jesus is a concept-type? Does Jesus even exist in this world? Okay, now I’m being silly, but you do get the point: just like every other chapter, Undead Unluck chapter 55 is full of interesting dialogue that may or may not foreshadow things to come in the future.

Spoil and Burn are undoubtedly the focus of Undead Unluck chapter 55, as Juiz and Billy scurry about beneath them trading blows. As a result, many of the questions we may have entered this chapter asking are left unanswered: Why did Billy betray the Union? Could Juiz convince him to come back? Even so, Juiz’s final line at the end – ‘Why are you not fighting like you mean it?’ – clearly signals that we might get some concrete information next week. Looking forward to it.

You can read Undead Unluck chapter 55 for free via VIZ Media.