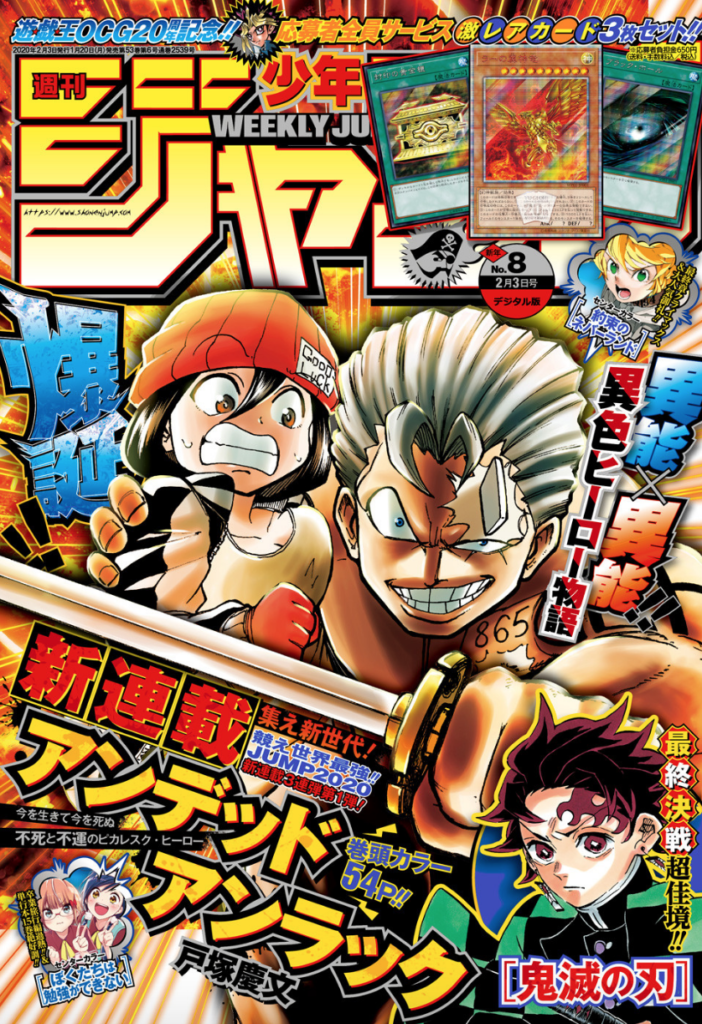 For all of the writing that myself and others have done on the past, present, and future of Weekly Shonen Jump, what ends up succeeding in the magazine’s lineup and what doesn’t appears to be left up to nothing more than chance. Indeed, if there was a logical formula, then Shueisha would’ve found it by now – there wouldn’t be monumental failures like Samurai 8, nor dead men walking like ZIPMAN!!.

Undead Unluck appears, then, to be a stroke of good luck for the magazine. Written and illustrated by Yoshifumi Tozuka, it has enthused readers with its wild premise, inventive action, and likeable characters. It was recommended alongside Agravity Boys on TBS Radio, its first collected volume sold well enough to get an additional print run, and a special keychain was made as a tie-in for its second. For all intents and purposes, things seem to be looking up.

But can Tozuka keep it up in the long run? How is he setting things up for the future? Furthermore, how has he managed to succeed up until this point? All of these things, and more, will be important to consider as Weekly Shonen Jump attempts to reassert itself after losing several series both old and new – including its latest cash cow, Demon Slayer: Kimetsu no Yaiba.

Upon its debut, Undead Unluck certainly made a strong first impression. Opening with its protagonist, Fuuko Izumo, declaring that she was going to kill herself now that her favorite shoujo manga had ended, it certainly caught my attention. Then, our second main character is introduced: Andy, an immortal zombie who stops her from killing herself only to fall victim to her special power, Unluck. 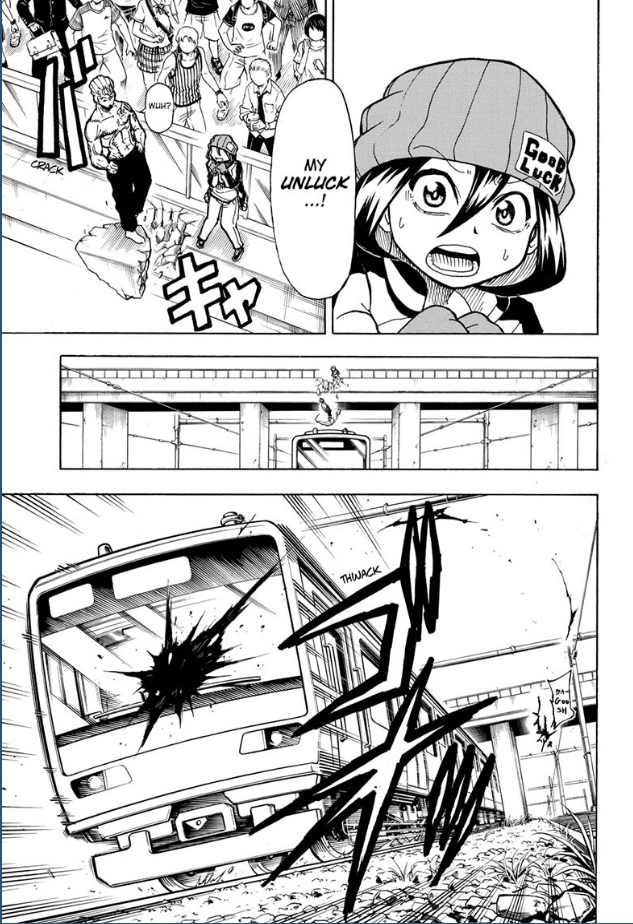 Herein lies the second way that Undead Unluck impressed me upon its debut. Although it gives in to the prevailing trend of battle manga in a way that so many other series do – Yui Kamio Lets Loose, for example – it does so on its own terms. Its power system is wholly unique, governed by a series of ‘rules’ such as Izumo’s ‘Unluck,’ which negates luck and turns it into bad luck for whoever touches her. There’s also Andy, who possesses the ability ‘Undead,’ which effectively makes him immortal. This brings to mind the writing of Nisio Isin during Medaka Box, but on the whole stands out as something altogether unique in an incredibly crowded space.

Furthermore, it is clear right from the very beginning of Undead Unluck that while Yoshifumi Tozuka may be an almost unknown rookie, he is more than able to deliver on this bombastic premise. It is one thing to write an interesting story, and another to make it work in the medium of manga. In this sense, not only are the character designs unique and the panelling communicative, but the artist’s penchant for massive explosions and city-wide destruction also comes into play. Unlike fellow new author Hajime Komoto, Tozuka sees no reason to skimp and recycle art – every panel is bursting with energy and enthusiasm, which makes the series a blast to read.

Fuuko and Andy: The Unlikely Pair

Nevertheless, story and premise are one thing, but it is the characters that are the heart and soul of any series. This is especially true in a serialized medium, as the characters provide the basis on which authors can create interesting scenarios and plot beats – how else could something like Dr. STONE be able to get away with a chapter such as 145, which just featured a bunch of cocktails based on the characters’ personalities?

In this sense, Undead Unluck does not disappoint. Our main characters, Fuuko and Andy, have already been covered up until this point, but it is worth dwelling for a moment on their unusual yet endearing relationship. Andy sees in Fuuko a way for him to fulfill his lifelong dream of dying: her ‘Unluck’ triggers bouts of bad luck so intense that meteorites rain literally down on the Earth. But he’s also convinced that only full, body-to-body contact will allow him to fulfil his wish – hence why he is always pressuring her to get down and dirty with him, even if she doesn’t want to. 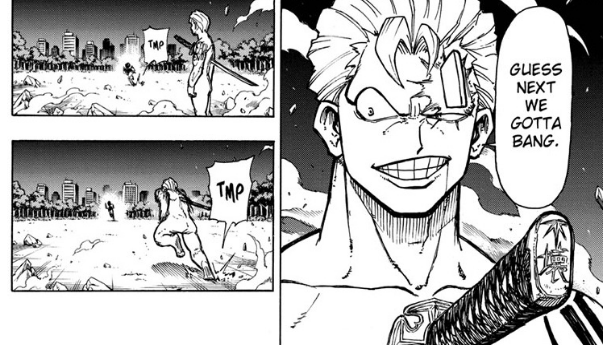 At first glance, this seems quite crass and almost manipulative. Yet, the chemistry between the two characters somehow makes it work. This is a common technique used in almost all forms of storytelling, but unlikely couples and mismatched pairs work incredibly well – think the smooth-talking Charlie and the autistic savant Raymond in the 1988 film Rain Man, for example. Perhaps closer to home would be the enthusiastic Naruto and the dour Sasuke, or the intelligent Senku and the bonehead Taiju from Dr. STONE.

With this in mind, it is quite clear that Fuuko and Izumo succeed because of their mismatched personalities. But at the heart of their antagonistic relations, there is a sweet core. Although Fuuko constantly says otherwise, she is slowly but surely falling in love with Andy – inserting a touch of tsundere love comedy to the action mix. This suits Andy nicely, as he is the one who wants to get down and dirty with her. This is also a smart addition by Tozuka, as it provides a very clear through line for both each character’s development and the overall plot.

Before we discuss the overall plot of Undead Unluck, it is worth commenting on some of the other, supporting characters. For the most part, these have been limited to members of the mysterious ‘Union,’ which is tracking down and capturing people like Andy and Izumo who possess ‘Rules.’ While we haven’t been introduced properly to all of them yet, the few that we have spent time with are all fairly likeable and work well with the core pair of the series. All in all, it seems as if the series has its characters down pat.

Where Undead Unluck does have me worried is in the area of development. It is always hard to know how much of your overall narrative to give away at the very beginning, especially in a serialized medium. Do you play your cards close to your chest, and risk boring readers with a lack of development? Or do you lay it all on the table, and risk leaving nothing to explore later on? Both approaches seem to work, although it depends on the circumstances.

Yoshifumi Tozuka appears to have taken the latter route, although there is still much to discover. Chapter 9 was a real turning point for the series: it explained what the function of the Union is; where the ‘Rule’-based powers come from, and what the ultimate end goal for the series might be. Spoilers prevent me from saying anything more, but safe to say that the chapter spelled out quite clearly where the narrative might be going in the future and its eventual end point.

That, in itself, not a bad thing. It provides Undead Unluck with a clear structure, for one, as Fuuko and Andy must complete various ‘Quests’ to achieve their goals. Having such a device in the toolkit is also immeasurably useful in serialized storytelling, where it can be difficult to come up with original ideas from week to week. Not everyone is Tatsuki Fujimoto. 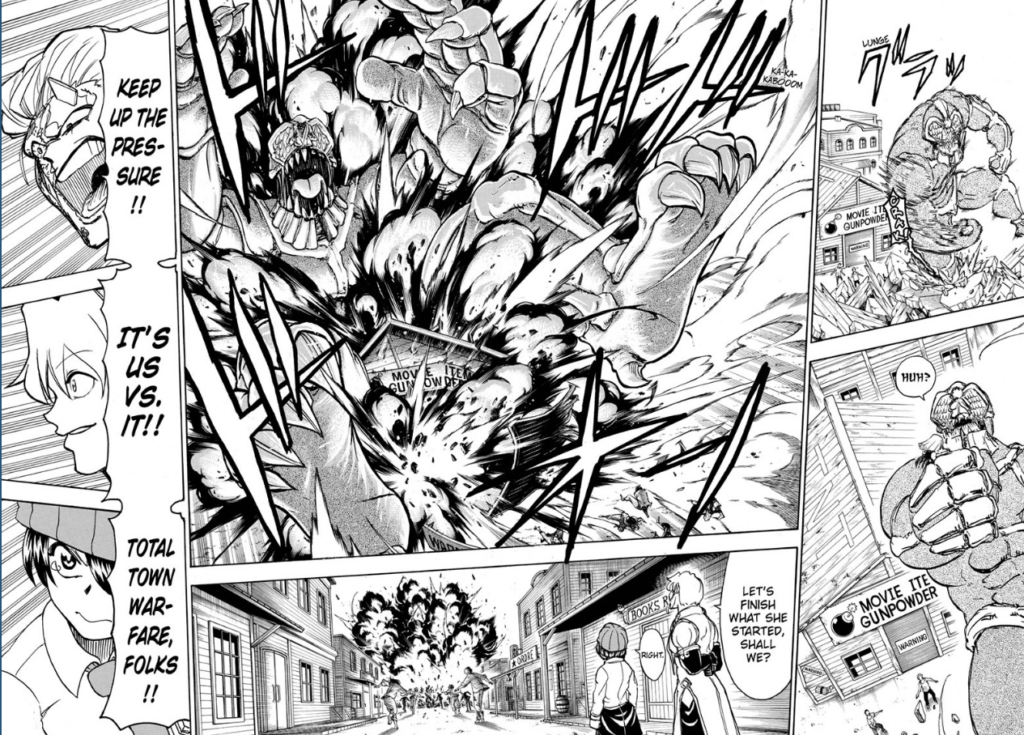 The only problem is that this doesn’t leave much up to the imagination. As a result of this chapter, it became very clear to see where the overall narrative is going from here on out. This also makes the chapter-by-chapter action that much more important: if the goal isn’t the focus of the reader’s attention, then it must be the journey. Here, Undead Unluck disappoints somewhat. The current arc was our first real taste of what the moment-by-moment story of the series might be, and it quickly escalated into something larger than life – entertaining, for sure, but the effect wears off quite quickly.

One of the other major narrative plot threads that is being developed and tied up as we speak is the hidden backstory of Andy. This has been present from the very beginning, but the latest chapters are finally providing some answers. Nevertheless, here we return to the problem: if Undead Unluck answers all of the questions now, what is there to explore in the future? This is why the devices of series like Chainsaw Man are so important: instead of answering questions, it prefers to develop them and leave them up to interpretation, which should leave the author with plenty of material to work with in the future.

It would be a lie if I said that I didn’t enjoy reading Undead Unluck each week. But I have noticed myself grow more and more distant from the series as it has developed its overall narrative. The presentation and character dynamics are still top notch, but that bombastic premise seems to have turned into its opposite. There is certainly room to develop in the future, but the story at this point leaves me with much more mixed impressions than something like Agravity Boys and MASHLE, where my mind is very much made up.

By way of a conclusion, we should return here to the question of ‘luck.’ As the great philosopher Hegel once said: “Necessity often expresses itself through accident.” When we look at something from afar, divorced from its relations to other things, developments can appear to take place almost by accident, with no underlying law. This is not the case. There are laws that underpin everything, from the world of nature to the world of human society. A lucky break is often just a sign that something deeper lies beneath the surface.

To return to the world of shonen manga, Undead Unluck is certainly an unexpected hit for fans of the magazine. Yoshifumi Tozuka, the author of the series, is practically an unknown rookie with only a couple of one-shots under his belt. Most of the other new series that have been introduced over the past couple of years have also ended rather magnanimously. There was nothing to suggest that Undead Unluck would be a success going into it, but succeed it has – evidenced by all of the recommendations and print run points mentioned at the beginning. 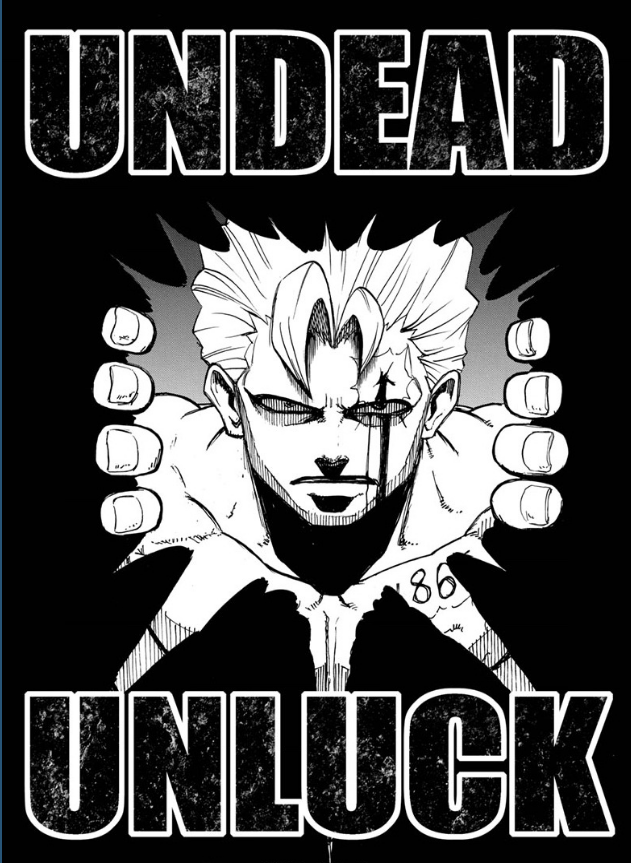 If Undead Unluck has succeeded, then it has done so on its own merits. A bombastic first chapter, yes, but also excellent character design and action direction, alongside attractive character dynamics. It has nothing to do with ‘luck.’ But the opposite is also true. If Undead Unluck does fail, then it shall be because of its own failings. These can be glimpsed, albeit remotely, in some of the series’ latest narrative developments: laying too much groundwork, perhaps, but also uncovering backstories a little too fast.

There is still hope for Undead Unluck. Unlike MASHLE, it has ingenuity and creativity. Unlike Agravity Boys, it has a strong beginning and relative consistency. Unlike Guardian of the Witch, it manages to elicit any emotion other than mild boredom. Its place in the magazine is secure, for now – let’s hope that it is able to keep it.

You can read Undead Unluck for free via VIZ Media’s Shonen Jump service.