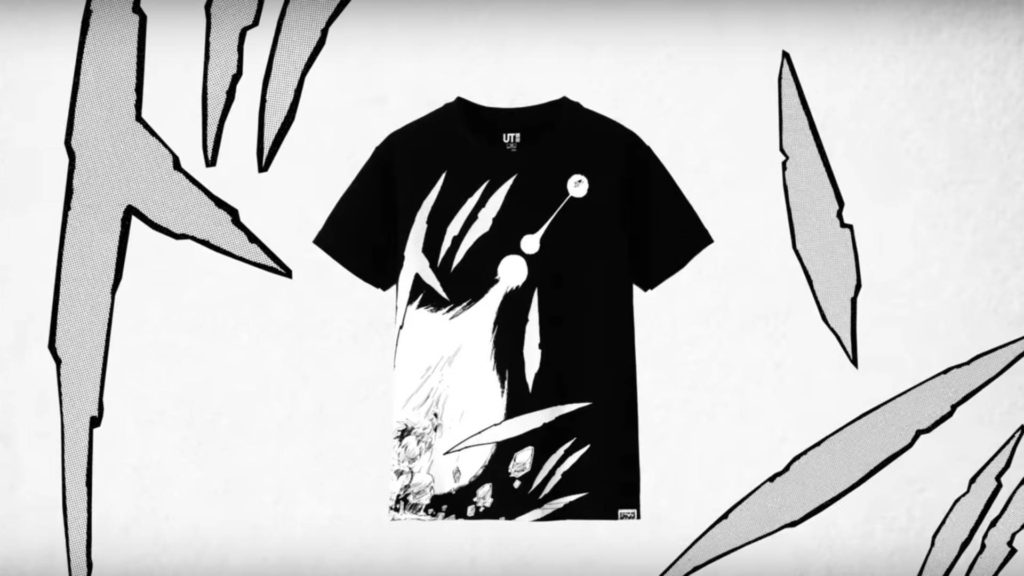 With cultural powerhouse Weekly Shonen Jump turning 50 this year, Uniqlo has been releasing for several months now special collaboration shirts with designs from Jump properties. The line has been doing very well, so Uniqlo has continued to add more designs each month to please eager fans. The latest addition to their line-up is several designs focused on arguably the most significant Jump properties, Naruto, One Piece, and Dragon Ball.

The Naruto additions feature designs of Naruto as well as Sasuke, who has been rather overlooked in the line as of yet. I don’t like these designs as much as the others – with the white shirt featuring the Hidden Leaf Village insignia on the breast being my favorite – but I’m sure that any fans of the series will be looking to pick these shirts up as soon as possible. Another design features one of the first panels in the series, explaining the origin of the Nine-Tailed Fox, which is sure to make many fans very nostalgic. That sense of nostalgia also carries over to the new One Piece designs, as it features many panels from the Romance Dawn arc, including the execution of Gol D. Roger and Luffy’s initial proclamation that he will become the Pirate King. Just checking out the designs brings me back to the early 2000s, watching One Piece dubbed on Toonami. Perhaps less nostalgic and more harrowing is the design that features Portgas D. Ace’s iconic death scene and line “Thank you for loving me!”. I can’t help but think that wearing such a shirt in public might ruin the series for those who might want to get into it, but it’s certainly a moment with enough gravitas to proudly display it on your chest. By far the most numerous in this addition to the anniversary line are Dragon Ball designs, which isn’t surprising given the universal appeal of the series as well as the upcoming movie. The new additions feature a wide variety of designs from across the whole timeline of the series, from the initial page introducing Goku with his monkey tail to the final panel of the original manga. The latter is particularly excellent due it’s blue coloring and sentimental value. One final interesting addition to the 50th-anniversary collection are several designs featuring the first issues of Jump in which the aforementioned three powerhouse series appeared in. I’ve always been a fan of the aesthetic of Jump covers, so I definitely won’t have any qualms about picking these up. For more information on the Jump 50th anniversary Uniqlo line, please check out the official website. All of the shirts are pretty cheap, running anywhere around the $8 mark, as you’d expect from Uniqlo. It’s worth noting too that worldwide stores are also stocking the collaborative collection, meaning you wont need to be flying over to Japan for this one.