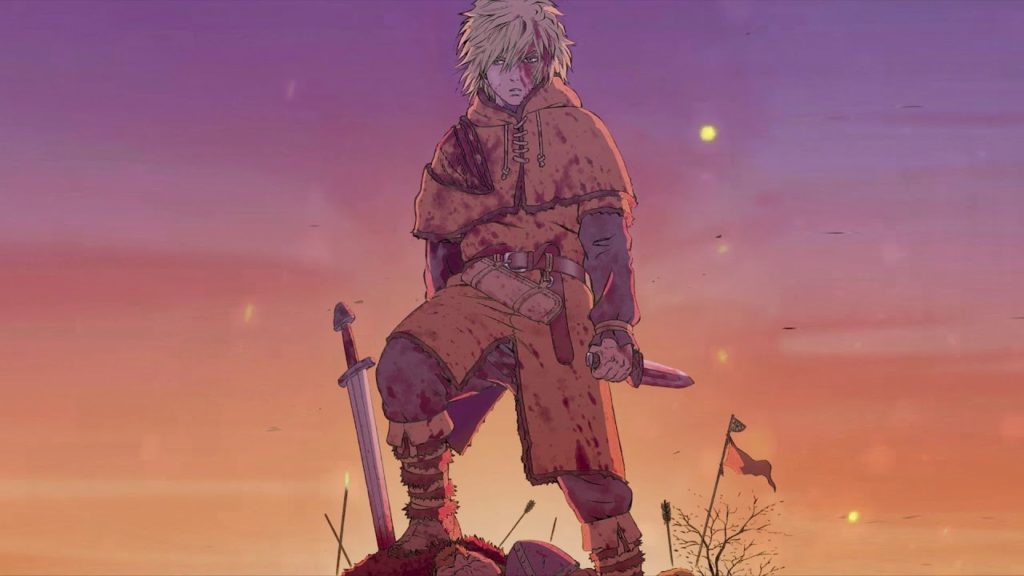 Series like Vinland Saga don’t come around very often. Anime has been known to get European historical now and again, whether we’re talking about full-on period pieces like the classic Shojo title The Rose Of Versailles or the monumental work it surprisingly inspired Berserk which draws from historical elements but making something new from them. Our topic today falls closer into the former category, although off the top of our heads we can name more shows about The French Revolution than we can Viking escapades. Maybe Makoto Yukimura’s Vinland Saga manga wasn’t technically the first series about Nordic warriors but it’s certainly become the most popular and the most critically acclaimed. If you haven’t checked out the show or the comic yet, there are reasons why it’s been winning awards. 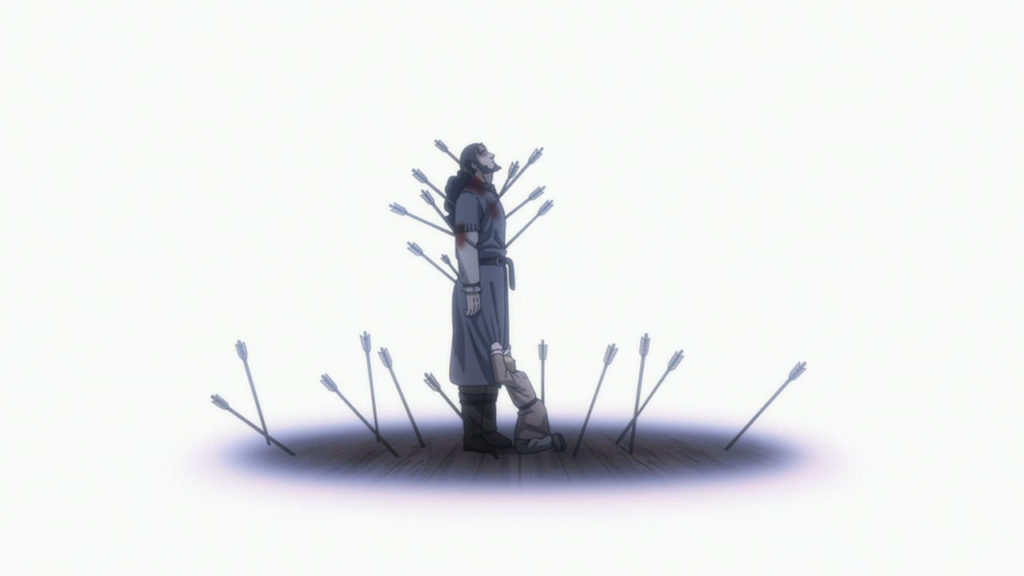 Just last month Vinland Saga took home the ‘best drama’ award from the 2020 Crunchyroll anime awards, and it’s not even available on their platform! While it did lose out best show of the year to Demon Slayer, not really a surprise considering that show’s all-encompassing popularity, the fact that the simultaneous action anime and history listen was even in the conversation is something to write home about. Within the drama category itself, it beat out a host of other noteworthy cuts from 2019, including the unconventional Jump survival series The Promised Neverland and the big return of Fruits Basket. Fans are going for cut-throat Viking raids over cute boys who turn into animals and orphanages that are run by demons which we respect. Worth noting that before the 2019 anime series came out, the manga has been racking up the wins for years including A Grand Prize in the 2009 Japan Media Arts Awards and The Kodansha Manga Award for Best General Manga in 2012.

Manga artist Makoto Yukimura has been serializing Vinland Saga in Kodansha’s seinen Monthly Afternoon since 2005 where it continues to this day. That makes the series cousins with a whole host of fan favorites from over the years, including the seminal Parasyte and Eisner winning Blade Of The Immortal which are equally indulgent in the blood and gets. Previously, Yukimura created the cult hit sci-fi series Planetes which followed a crew of space debris collectors in their day to day zero gravity trash collect exploits. The two series couldn’t be more different on the surface, one being a merciless and vibrant portrayal of warrior life 1000 years ago and the other a mostly serene slice of life story where character drama plays a bigger role in the narrative than anything else.  However, Yukimura’s penchant for visual realism and nuanced character that can’t be categorized as good or bad people so easily can be found in both. 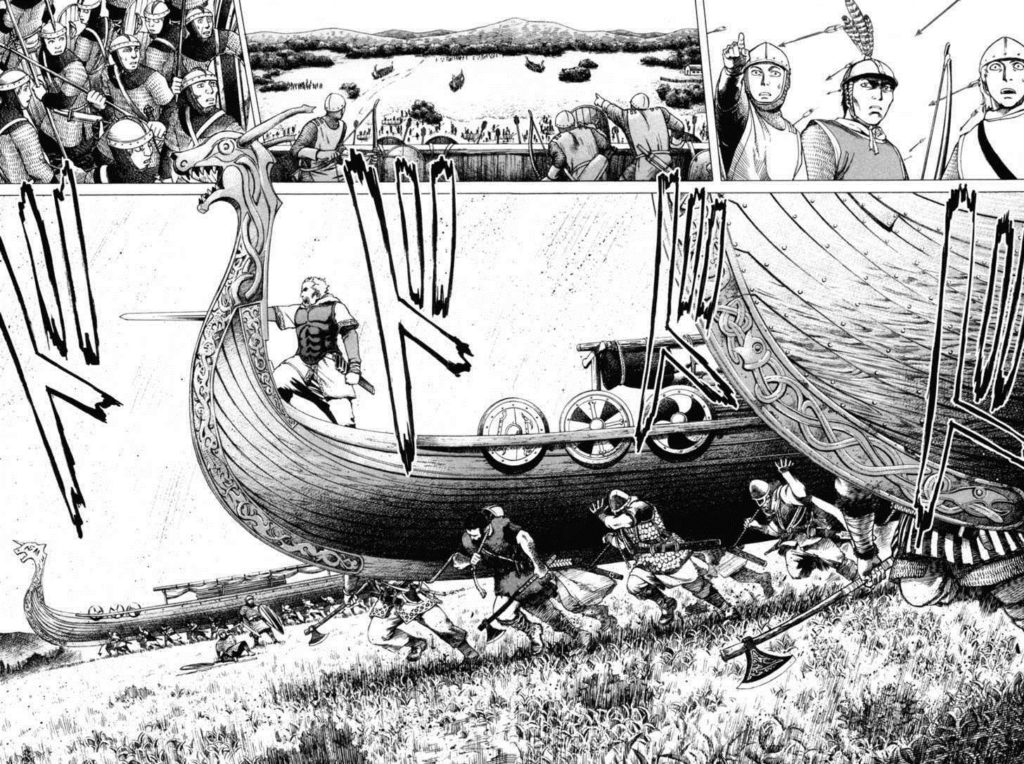 If you buy the printed editions of the manga, which come in nice hardback 2 in 1 editions stateside, you can find  Makimura musing on what Viking life was really life in little essays at the end of each volume. How did they brush their teeth? What did they use for toilet paper? While these very specific issues are left in the afterward, it’s this kind of critical thinking and a desire to get the small details downright that makes the world of this series such a believable one. Just as he sought to make Planetes as real of a space story, he uses swathes of ink and bunches of panels to put real Viking life on paper.

From the armor to the chips, everything in Vinland Saga is presented so cohesively you get sucked straight into the early 1000s when the series place. That realistic streak seeps into everything about the comic, from characters being three dimensional presented with their admirable and contemptible qualities side by side as is to the plenty of hypothetically Viking warfare tactics that take into account the ship and weapon technology of the time. It also spares no expenses with the gore, with body parts and parts of body parts flying all over the place. 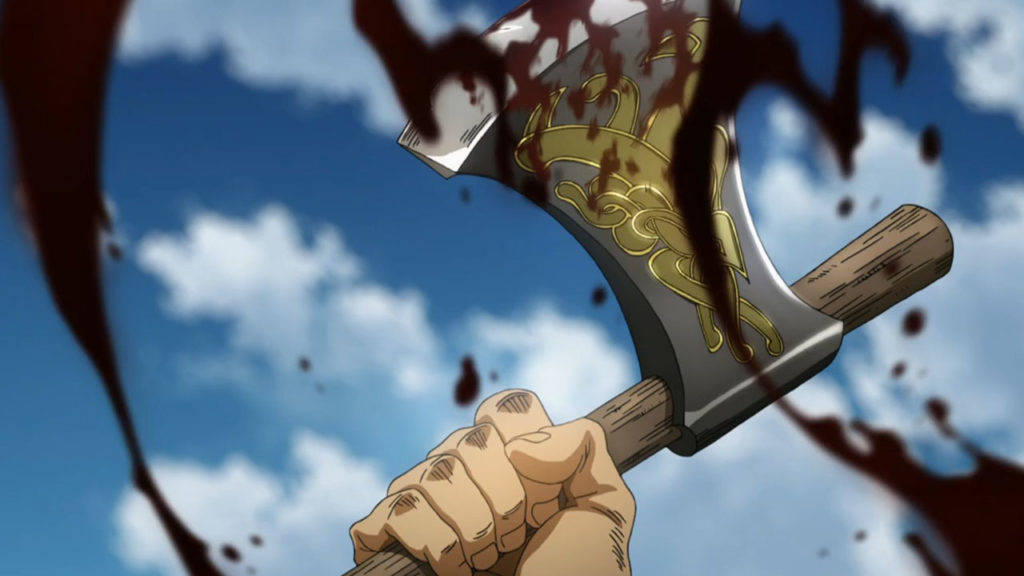 Of course, by nature of it having to be animated, the anime adaptation of Vinland Saga isn’t quite as densely detailed as the manga original but as far as TV animation goes it looks really darn good. Being adapted by the talented folks over at Wit Studio who has consistently done the most incredible job bringing Attack On Titan to life, neither fans of the manga or those curious about the anime after hearing about it at the Crunchyroll Anime Awards could be disappointed with its visual presentation. One on one duels of mortal combat to giant skirmishes with dozens of Vikings on screen at once, Wit depicts all the actions smoothly and with the punch it needs to effectively floor the viewer. Most episodes have one or two sequences that enter real on-screen spectacle territory but even in its quieter character moments, first-time head director Shuhei Yabuta does a bang-up presenting Vinland Saga’s more subtle moments.

And quiet moments does this anime have! Being more than just a general Viking tale, the main story of Thorfinn who travels around with a group of Vikings as they plunder villages and wage conflict wherever they go. While he does their bidding, he openly despises the band’s commander Askeladd who underhandedly bested Thorfinn’s father in combat some years ago. The reason he’s joined up with these nefarious men is that Askeladd rewards his men fairly, and as a reward, Thorfinn time and again requests to duel Askeladd so he can kill him properly as a warrior. He hasn’t won yet but Askeladd keeps the kid around,  who’s grown very adept at combat making him a valuable asset to the troupe. Its clear throughout Thorfinn struggles with the morality of going around and killing innocents, occasionally going and ahead and trying to warn villages in advance his people are coming, but ultimately in the dog eat dog world of 1000s Europe you do what you have to we guess. 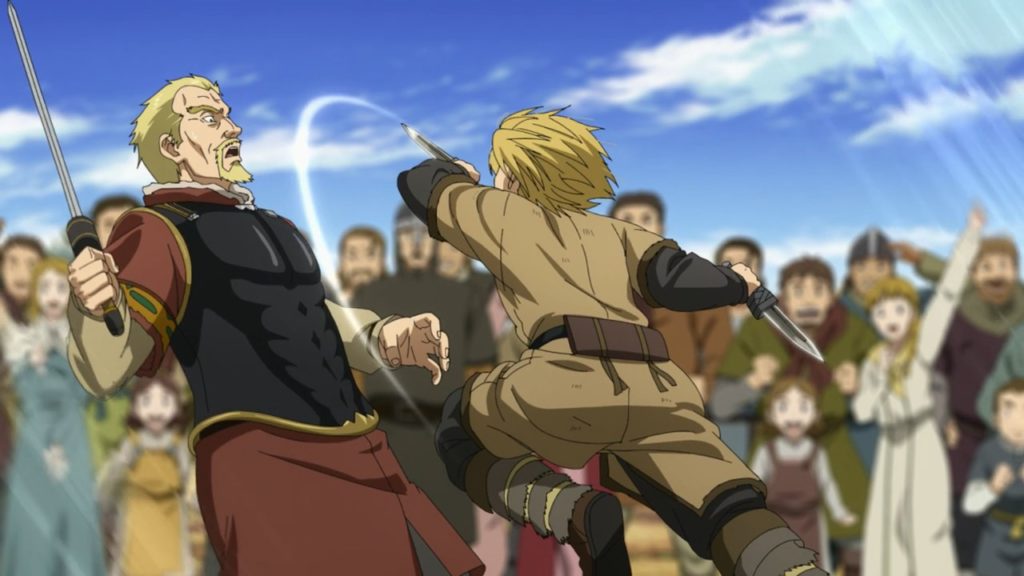 While on paper this doesn’t sound like a set up for quiet moments, remember original creator Makoto Yukimura puts as much care into his character portrayals as he does his worlds. The atypical relationship between Thorfinn and Askeladd lends itself to more than one instance of a begrudgingly heartfelt moment More than that, the constant juxtaposition between these Vikings acting like a merry band of brothers who help and care for one another to when they kill women and children without qualms because it’d be easier for them to rot than it would be to feed them looms beneath the surface of many character interactions throughout the show.  You do have to suspend your disbelief a bit and say to yourself ‘they were different times’, as mass murder is generally regarded as a bad thing, but with the show’s immersive qualities it makes it pretty easier for the viewer.

It’s no wonder Vinland Saga has been such a critical success with all the moving parts it has. Genuinely educational without coming across as boring, plentiful kinetic and visceral action segments, and even all the conversation and the equipping comes across as engaging. Maybe it’s a little too heavy R rated all of the time to gain as wide a viewership as the similarly bloody Demon Slayer but it’s down a good job of winning people over despite that. We also wonder if the series was available on a Crunchyroll or a Netflix, and not just Amazon Prime in The United States, would it have won itself even more viewers? Either way, the first 24 episode anime series went off without a hitch, earning respect along the way. While season 2 of the anime hasn’t been formally announced, with the series’ good reception and the last episode being called ‘End Of The Prologue’ one might assume that more brutal Viking adventures are coming down the pipeline in the not too distance future.

You can watch Vinland Saga on Amazon Prime in The United States.