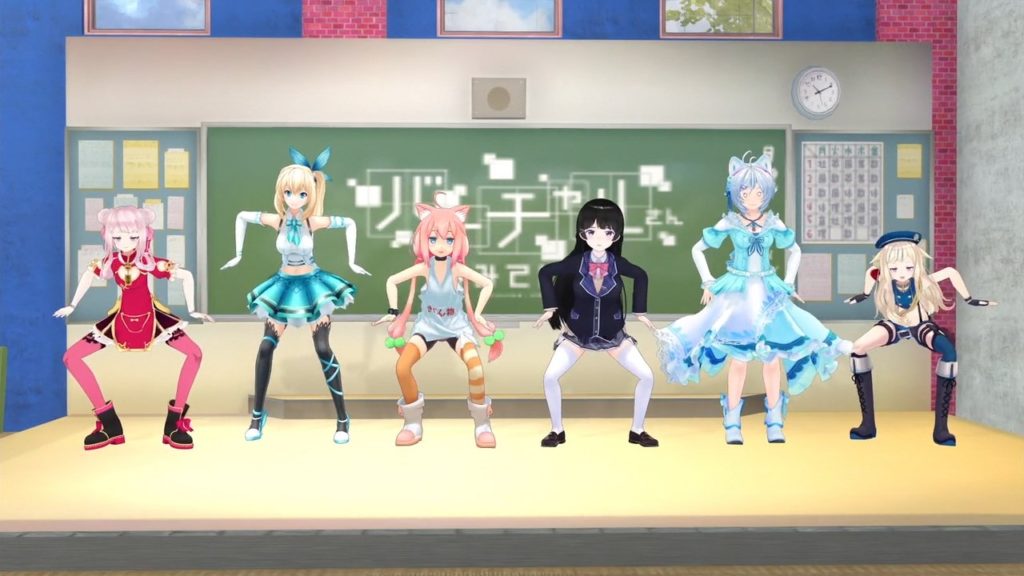 Note: This review is based on impressions from the first three episodes of Virtual-san wa Miteiru.

The first two minutes of Virtual-san wa Miteiru are perplexing. A horse with the body of a man in a pinstripe suit sits on a chair. He waves his arms in the air in the same, looping rigid animation as a farcical comic voice introduces you to ‘Virtual Town,’ the town where VTubers live.

Then, down the badly textured street, six cute girls walk and deliver quirky self-introductions. The last one, halfway down the road, begins to scream ‘Ora ora ora’ and embarks on a walk cycle that would give Monty Python’s Ministry of Silly Walks a run for its money. 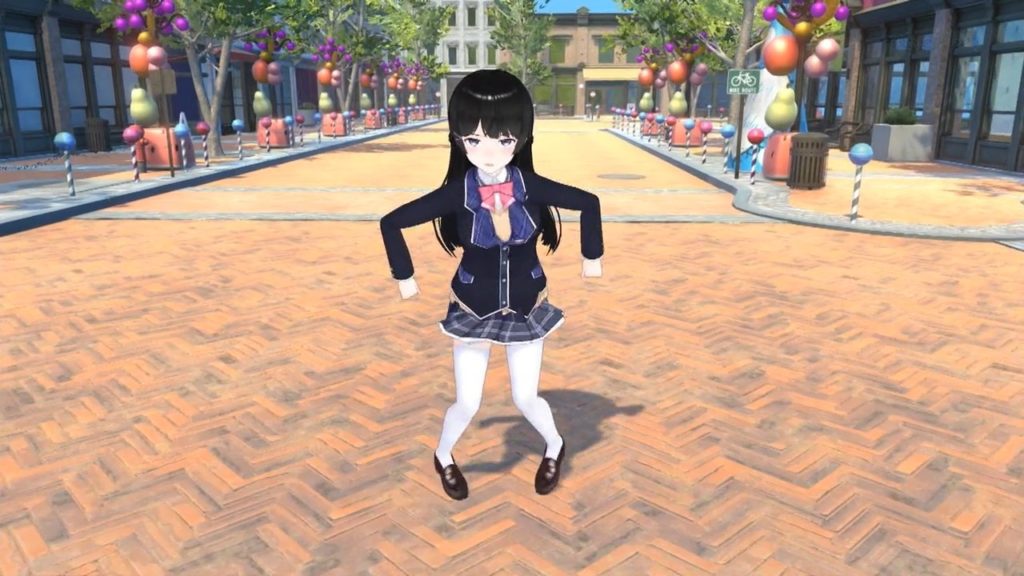 Suffice to say, I went into the rest of that episode fairly confused. But then again, I was already confused about the show before I had even watched it. After all, Hideaki Anno – creator of Evangelion and Japanese national treasure – is credited on the show for ‘Idea Cooperation.’ This type of show, suffice to say, is not the kind of thing Anno usually puts his name to.

Other issues clouded my judgment as well. The question of why put these Virtual YouTubers on TV was a seemingly important one. I was also rather skeptical of how entertaining the VTubers in the show could be, and why they deserved to be the focus of the show and not the giant of the industry that is Kizuna Ai. But, as I watched more and more, the more I began to appreciate what the show was and get over my hang-ups. 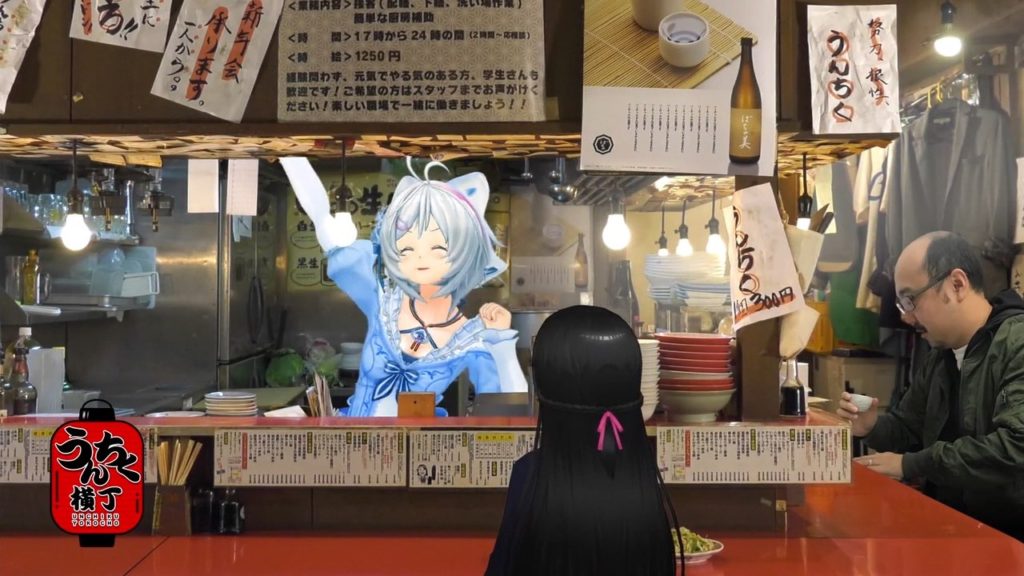 The show follows a sketch format, presenting two-to-three-minute skits featuring various combinations of characters. Some of these are absolutely hilarious. One of the best skits is ‘Unchiku Yokocho,’ featuring Electric Girl Siro. A character will come into the ramen shop she seemingly works at, asks for some ‘unchiku’ or ‘knowledge,’ and Siro will drop trivia on a certain subject for about a minute. It’s both fascinating and hilarious. Another favorite is ‘Hinata-chan is Going to School,’ featuring Nekomi Hinata. This one is for all of us gamers out here, as Hinata on her way to school daydreams about video games and gets caught up thinking, among other things, about where would be best to grab loot if her hometown was a battle royale map.

That’s not to say that everything in the show hits home, though. Some sketches fall a bit flat such as ‘Fuji Aoi Park,’ where Aoi Fuji interacts with a gorilla. I don’t really get this one at all. Another sketch titled ‘Kerin Slayer,’ which riffs on last season’s Goblin Slayer, tries to repeat the same ‘unfinished animation’ gag from Pop Team Epic, but it’s not as funny and only means that the viewer has to watch the same scene twice in a row. Finally, ‘Virtual Grandmother’ often goes straight over my head due to its usage of Japanese puns and wordplay, although I will admit this is because I am a non-native speaker.

Bringing together the various disparate sketches is the main cast, all of which have differing levels of popularity. The six main characters are Mirai Akari, Electric Girl Siro, Nekomiya Hinata, Tanaka Hime, Suzuki Hina, and Tsukino Mito (in order of subscribers as of the time of writing). The only character I had heard of beforehand was Mirai Akari, which was to be expected given that she is one of the most popular VTubers.

But even without prior knowledge, each characters’ quirks and mannerisms quickly won me over, and I found myself laughing at their antics in no time. I particularly like Mito for her dry humor and Hinata for her Gamer Humor. They also work quite well together as a unit, with each of their personalities bouncing off of each other.

Yet, when we speak of popularity and prior knowledge, we have to address the biggest elephant in the room. Where is Kizuna Ai? She essentially created the VTuber trend and is by far the most popular VTuber as a result. So, if you’re making a show about VTubers, then surely her inclusion would be a must.

I don’t quite know the reasons why Ai is not included in the show – possibly due to her current focus on music – but what I can justify is the effect her exclusion has had on the show. In effect, removing the most popular VTuber had allowed these less popular VTubers to shine. After all, if Ai was included in the cast, there would be a strong tendency to simply make it a Kizuna Ai show, given her massive fanbase. In that respect, I’m also glad that she wasn’t included. Perhaps limiting her to singing the show’s OP was a good move, after all.

And while we’re on the topic of elephants, there’s perhaps another one worth addressing – the seemingly contradictory concept of Virtual YouTubers appearing in a TV anime. Surely, at that point, we should just… take the ‘Tuber’ out of their names?

I think this issue fundamentally addresses the actual appeal of VTubers. It’s not the fact that they’re on YouTube. It’s the motion capture used in their creation that brings forth a new type of physical comedy, as well as the facilitation of quick and easy video production with the technology that got people interested in VTubers in the first place. In this sense, Virtual-san wa Miteiru is able to capture the true essence of what makes VTubers worthwhile, even if it places them in a seemingly contradictory medium.

Even so, the existence of VTubers on YouTube was always a precarious one. YouTube is not widely popular in Japan, as other services such as Nico Nico Douga and BiliBili have largely been able to fill the video streaming niche. In fact, VTubers are one of the very few domestic Japanese phenomena to occur on the platform, along with such creators as Toukai On Air. So the relationship between VTubers and YouTube has always been rather one-sided, and I’m not surprised to see them back on traditional media in this sense. 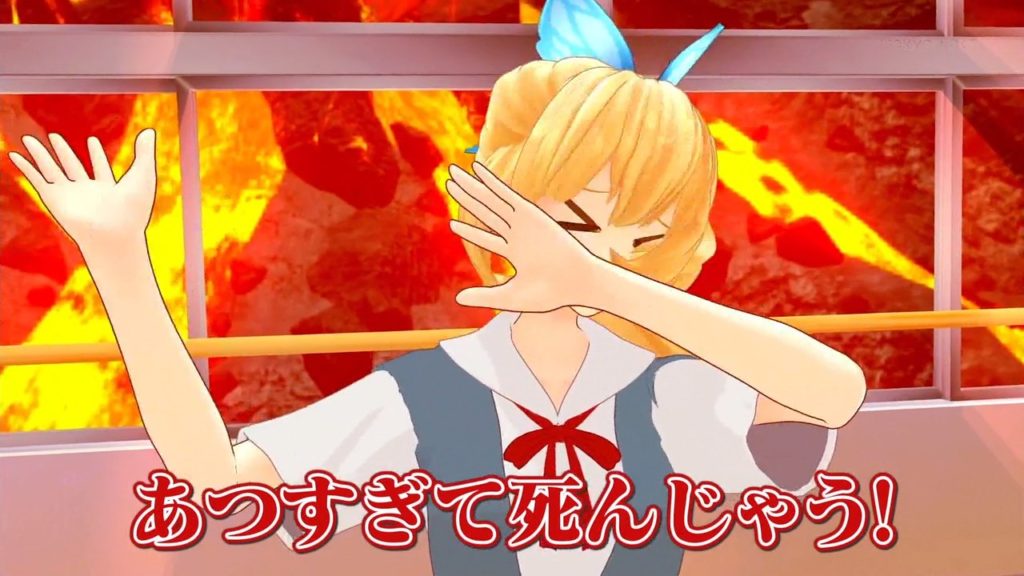 What is interesting though, is that the producers behind this anime are Dwango, who actually own Nico Nico Douga. The fact that Google, who owns YouTube, have allowed their direct competitor in Japan to take their own platform’s domestic stars away from them and use them in a TV anime must be an oversight on their part. Or, I suppose they’re too busy destroying their own platform through demonetization and corporatization to care.

But with all that aside, once I came out the other side of three episodes of Virtual-san wa Miteiru, I was pleasantly surprised. Even if you’re not a massive VTuber fan, I definitely think there’s something to enjoy here. Perhaps that’s what Hideaki Anno sees in the show. That, or just cute girls.

Virtual-san wa Miteiru is currently available for streaming via Crunchyroll.