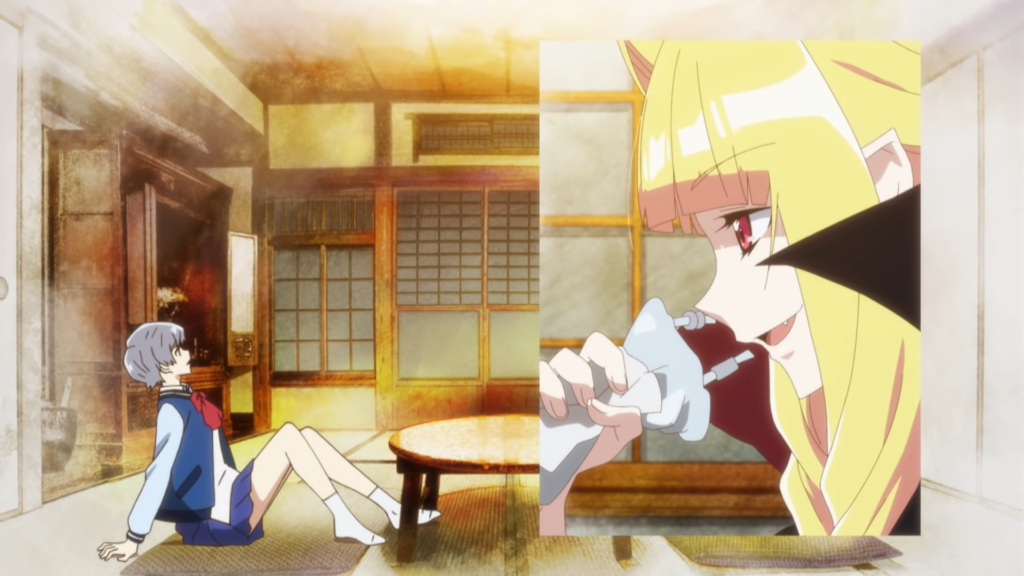 At first glance, you might assume Vladlove is some run-of-the-mill anime circa 2007 or so. You might see what could be described as a cutesy art style complete with a blonde girl in a lolita dress and say ‘nope, I didn’t like Rozen Maiden the first time around’. It could dawn on you that said blonde-haired girl is, in fact, a vampire, leading you to believe that Vladlove is trying to crash in on that sweet Monogatari cash-flow. Even if the phrase ‘Mamoru Oshii’s first animated work in over a decade’ means nothing to you, we challenge you to watch Vladlove Episode 1. It’s up on YouTube for free as this article is being typed. Here, we’ll put it right below this paragraph to make it easy for you. Once you actually see the show in motion, you’ll understand; Vladlove‘s going to be the hidden gem of 2021.

Right from the start, the opening animation alone will sweep you off your feet, teasing the possibility that Vladlove might be something else. It starts off with live-action band performance footage, overlayed onto a sequence of slick traditional animation shots, and god does it look cool. Following that, you’re tantalized with visions of a church burning and a woman smoking an entire cigarette in one breath; and we’re sad to report that the latter is also very cool. It all comes together with liquid-smooth and surely rotoscoped animation of the show’s cast rocking the hell out in what’s almost an homage to Haruhi Suzumiya’s seminal ‘God Knows…’ scene. While you can’t judge a show by its opening no matter how good it is (anyone remember Xam’d), we’re thrilled to report Vladlove Episode 1 more than lives up to its promise.

Before we get into the content, it must be stressed that the ‘kawaii’ outer veneer of the show’s nothing but a lure to bring you in. Yes, like most other anime in our modern area, it’s mostly populated by high school girls in fun outfits with marketable faces. For once though, at least if this first episode of Vladlove is anything to go by, the show doesn’t exist to serve the flashy style in which waves of character merchandise can be made from. We’re not saying that won’t happen, but instead, the approachable visual aesthetic (especially for Mamoru Oshii standards) is made to trick you into enjoying something anime isn’t always the best at caring about: Animation. This first humble offering of comedic vampire hijinks doesn’t just feature fluid motion but inventive approaches to the art of animated scenes, on par with anything from Eizouken.

With a higher batting average than most, few can boast the animated filmography that Mamoru Oshii has. He absolutely goes toe to toe with Hayao Miyazaki and Satoshi Kon. His signature dryness makes him a more acquired taste than Hayao. Oshii’s film meditations like Ghost In The Shell 2, Ghost In The Shell vanilla, and The Sky Crawlers have rightfully earned him a passionate cult following. While his feature film work features stellar animation without fail, he’s known for realism. Vladlove Episode 1 on the other hand sees the famed director ditching his usual shtick in favor of a more buoyant approach to animation he hasn’t employed since his Urusei Yatsura days. Given credit where credit’s due, project co-director Junji Nishimura must be responsible for some of that cartoony flare, as he’s the man who translated Ranma 1/2 to the small screen all those years ago.

Vladlove features some endearing animation and a level of care only made possible with the involvement of an actual master. It also has a central concept revolving around a dynamic that only a master could come up with. Vampires are nothing new in anime, nor are vampire comedies, though we’re not sure quite how many of you remember Chibi-Vampire. Oshii twists those tropes in a way so particularly novel that they feel new, with Vladlove Episode 1 being a successful proof of concept. See, you have Mai Vlad Transylvania on the right, a vampire who’s not confident enough to do vampire things like suck people dry of their blood, despite needing it for sustenance. As good as a ‘shy vampire’ is, the genius of Vladlove comes in pairing them with Mitsugu Bamba, the resident ‘blood donation otaku.’ Literally, this girl exists to give blood. With the help of their school nurse, who happens to collect rare blood samples, they set out to launch a blood donation club. Absurd, but so thoughtfully done that there’s nothing you can do but respect it.

Vladlove Episode 1 starts the series off impressively well. Light enough to make for fun watching, but still particularly detailed, if we were to sum up the first outing in a word we’d call it ‘refreshing.’ Whether knowing this is the legendary Mamoru Oshii’s big return to anime (and yes he brought the quintessential Kenji Kawai with him for the soundtrack) is what made you interested or you liked our ‘Vladlovin’ pun, you will not be disappointed with Episode 1. Unless all you want from Oshii is yet another extended hyper-realist dry conversation simulator; then you might be. Our only complaint with Vladlove so far is that it doesn’t start properly airing until next year. This ‘special version of Episode 1’ on YouTube is just a tease, the faint scent of blood crossing the vampire’s nose before she’s claimed her prey. Hop on this one early.