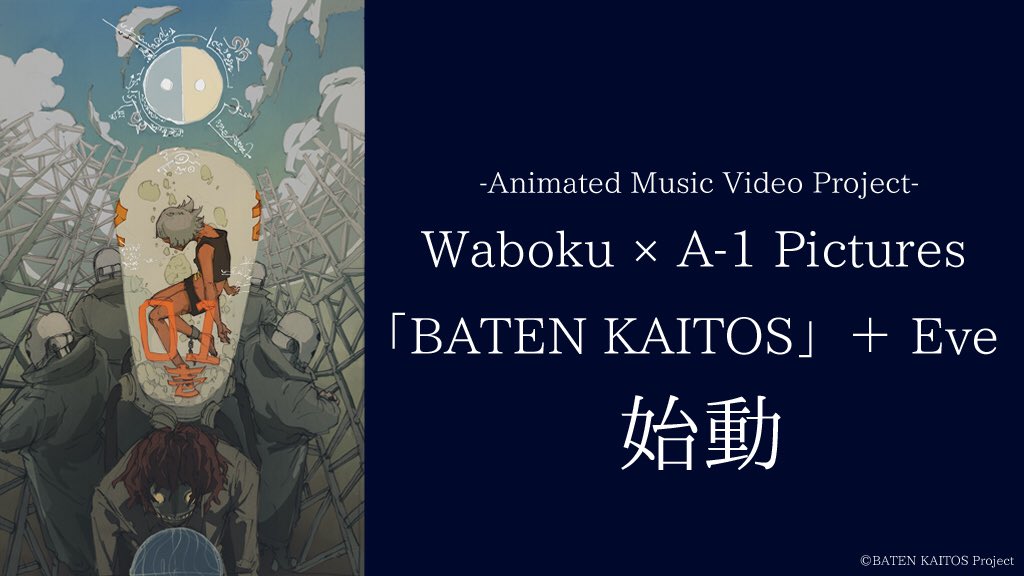 Illustrator and animator Waboku and A-1 Pictures will create a new animated music video project, the two recently announced. The music video project will also feature Vocaloid producer and singer-songwriter Eve. The new collaboration will apparently be called Baten Kaitos.

The project was announced on Twitter on 24 December. So far, not much about the project has been revealed yet. On Twitter, Waboku explained that Baten Kaitos was separate from Tokyo Ghetto 0.8, another video project he is involved with.

Both Tokyo Ghetto 0.8 and Baten Kaitos involve Eve. However, Tokyo Ghetto 0.8 is a spin-off of a previous Tokyo Ghetto video featuring Hatsune Miku that was released in 2018. ‘This is a different thing, both are progressing as different works, so don’t be confused,’ Waboku states.

Baten Kaitos is the name of a double star in the constellation Cetus, the sea monster. The Twitter announcement by the Baten Kaitos Project notes that the name ‘looks like the name of a star.’ It is also the name of a 2003 Monolith Soft/ Namco role-playing video game for the Nintendo Game Cube. However, there doesn’t appear to be any connection between this new music video and Baten Kaitos: Eternal Wings and the Lost Ocean. (At least, not yet.)

The animation studio A-1 Pictures is a subsidiary of Aniplex. Their anime series have included Black Butler, Fairy Tail, The Idolmaster, Sword Art Online, Darling in the Franxx, and Hypnosis Mic: Division Rap Battle. Their next TV anime series will be the science-fiction series 86 in April 2021.

Eve provided theme songs for several anime series, including Jujutsu Kaisen, and Dororo. Eve also created the main theme for the recent anime film Josee, the Tiger, and the Fish.