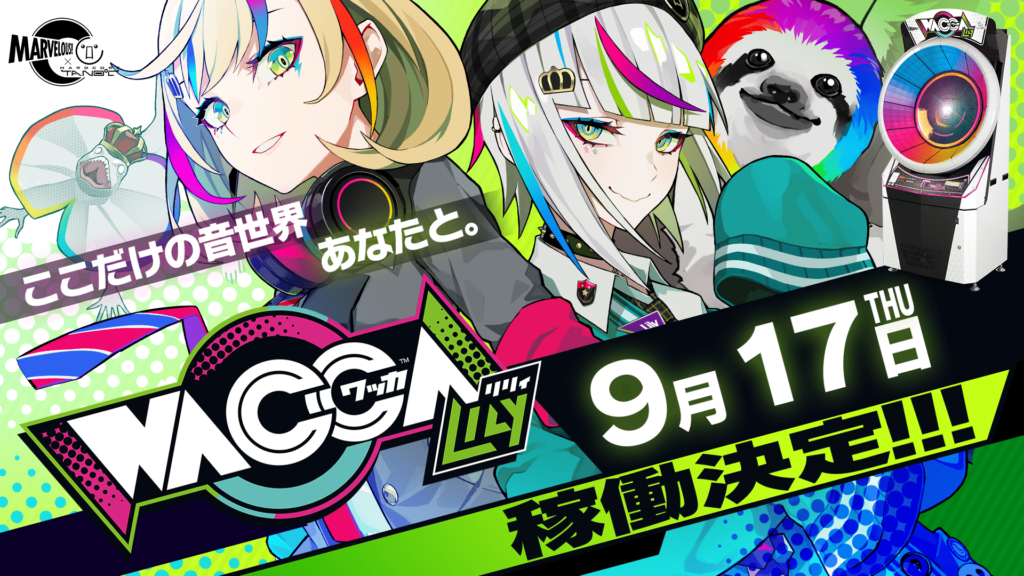 Game developer MARVELOUS and HARDCORE TANO*C released WACCA in the Summer of last year and released it’s first major update to the game with WACCA S in January of this year. On September 17th, the joint effort between the two companies will see another major update for its ambitious rhythm game WACCA in the form of WACCA Lily

For those of you who are unfamiliar with WACCA, let me get you up to speed a little bit. WACCA is an arcade rhythm game that utilizes a full 360-degree touch ring for complete immersive gameplay developed by MARVELOUS. The song list is handled by none other than the Japanese hardcore techno record label, HARDCORE TANO*C. HARDCORE TANO*C is the net-label which plays home to heavy hitters such as; REDALiCE, DJ NORIKEN, USAO, MASSIVE NEW KREW, P*Light, t+pazolite, and DJ Genki.

The teaser images sent out by the companies have a very large emphasis on the color green, all the way down to its new navigator. So I would expect to see a very green interface in contrast to the rainbow interface that we saw with WACCA and WACCA S.

WACCA Lily will be releasing to game centers on September 17th and you can be sure that we’ll be giving our impressions on the game and what it brings to the table just how we did with the initial release of WACCA last summer. I for one am excited to see what the two companies have in store for its players.