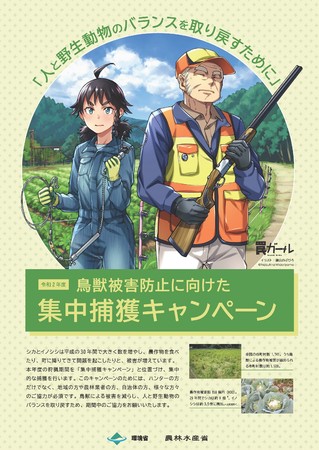 Ever since he could remember, Nobuhiro Midoriyama has had a thing for hunting and trapping. Being the son of a farmer meant that he spent a lot of his younger years protecting his crops from predatory wild animals daring to swoop in for a nibble. His Wana Girl manga series has captured that agricultural spirit by having its main protagonist perform the very same types of tasks he performed as a child. Now the mangaka is taking it to the next level with his new poster for one of Japan’s latest environmentalist campaigns.

This campaign, known as the “Heavy Hunting Campaign to Prevent Wild Animals From Eating Crops,” is one of the latest rolled out by both Japan’s Ministry of Environment and Ministry of Agriculture, Forestry and Fisheries, and it’s exactly what you’d expect it to be. Japanese citizens have long been aggravated by wildlife ravaging their local communities, with 1,500 municipalities racking up a reported 15.8 million yen worth of damage back in 2018. Wild boars have rampaged beyond just the usual rice paddies too, with their presence clogging up train stations, beaches, and shopping districts. Worst of all is how they’ve physically attacked citizens and caused cases of classical swine flu to spread.

This hunting and trapping campaign will be put into effect next month, making it another environmentalist campaign to incorporate anime into its aesthetic. The Japanese Ministry of Environment would do the same back in 2018, using cute moe girls to combat global warming. Greenpeace would also use anime in their promo for their Detox My Fashion campaign in 2012, which aimed to combat fashion companies and their textile facilities from dumping toxic waste into the water. Knowing this, it will probably be a matter of time before we see VTubers promote responsible waste management.