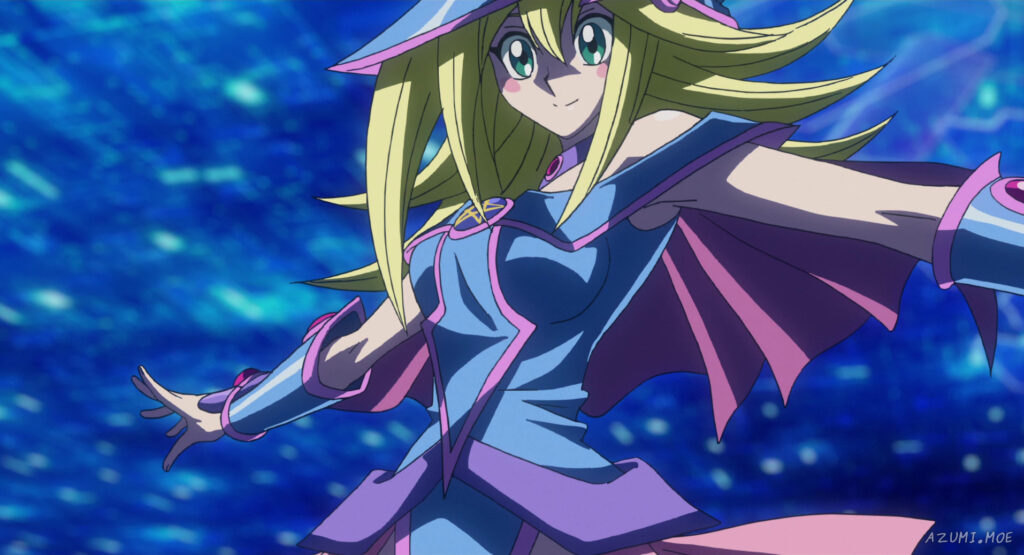 If you want to learn about the history of the Yu-Gi-Oh! anime series, we need to clear up some misconceptions first. The franchise didn’t start with the trading card game, but with a 1996 manga.

In fact, the whole ‘You just activated my trap card’ Duel Monsters card battle concept doesn’t get introduced until the second volume of the manga. It shows up in the third episode of the first anime adaptation. Oh, and the first anime isn’t the version that most people associate with being ‘first.’

And while Yu-Gi-Oh! main characters tend to be named ‘Yu’-something (and have wild hair, even by anime standards), they all aren’t Yugi. Unlike Pokémon, which has Ash in pretty much all anime versions, the Yu-Gi-Oh! universe is extremely loosely knit together.

Let’s piece together the complicated history of this franchise: 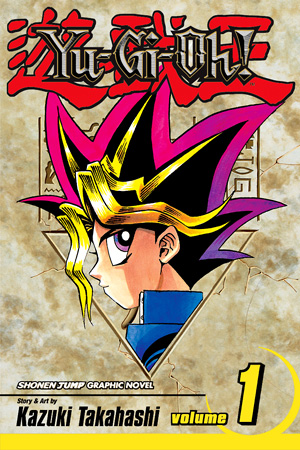 Takahashi initially wanted to create a horror story, but he switched gears. The end result is a shonen story with some dark, horror elements about a wimpy kid, Yugi Mutou. When Yugi completes the ancient Egyptian pyramid-shaped Millennium Puzzle, he gets possessed by Yami Yugi (Dark Yugi), otherwise known as the Game King, Yugio.

In the manga, Yugio’s first act is using a Shadow Game and subsequent Penalty Game to get much-deserved revenge on one of the bullies who had tormented Yugi earlier. In fact, manga-version Dark Yugi is downright creepy and cruel at first; with a Dr. Jekyll & Mr. Hyde personality.

After a dark beginning, most of the rest of the story revolves around the card game Magic & Wizards (heavily influenced by Magic: The Gathering), which later becomes Duel Monsters.

Many of Yugi’s rivals carry Millennium items, six ancient and powerful artifacts which are counterparts to the Millennium Puzzle. Naturally, these rivals will battle in tournaments and card duels with lives and souls on the line. There’s also the mystery of Atem, the Pharaoh whose amnesiac spirit becomes Yami Yugi.

The first anime adaptation came out in 1998. This TOEI series did not get wide release outside of Japan, and it only lasted 27 episodes. It is sometimes called ‘Season Zero,’ or a ‘Lost Season,’ although it’s technically not related to the second, more popular anime series.

Judging from what little I’ve been able to find, the TOEI series clearly wasn’t on the same level as Cardcaptor Sakura, Cowboy Bebop, Trigun, or other anime from the same era. However, the story was unique for concentrating more on the characters, and less on the deadly serious card battles. 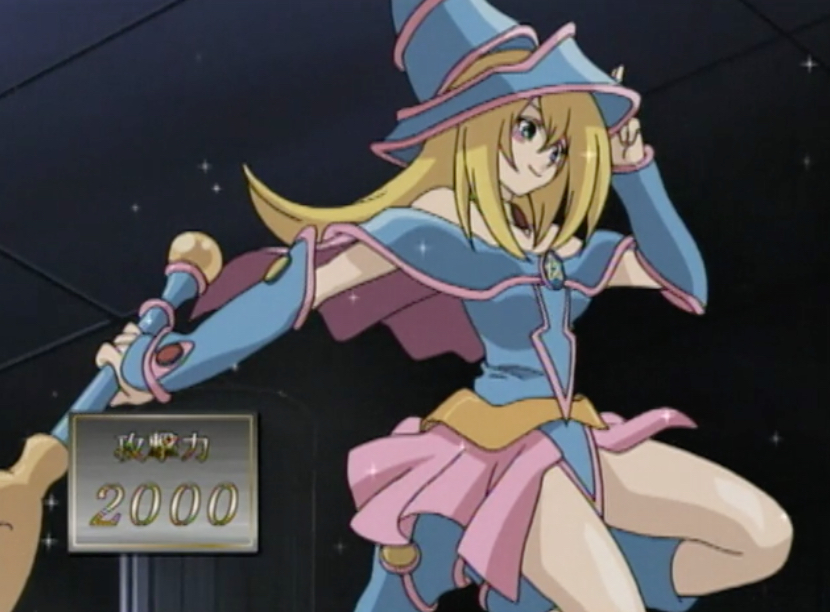 It’s the second anime adaptation in 2000 that you probably remember. Yu-Gi-Oh! Duel Monsters, created by Studio Gallop, jumps right into the card battles. In North America, 4Kids Entertainment imported the series, with all of the usual complaints about cuts, edits, translations, etc.

From here, the story gets complicated as titles and plots start to proliferate. While the basic game-playing formula remains the same, many manga and anime spin-offs don’t involve Yugi. 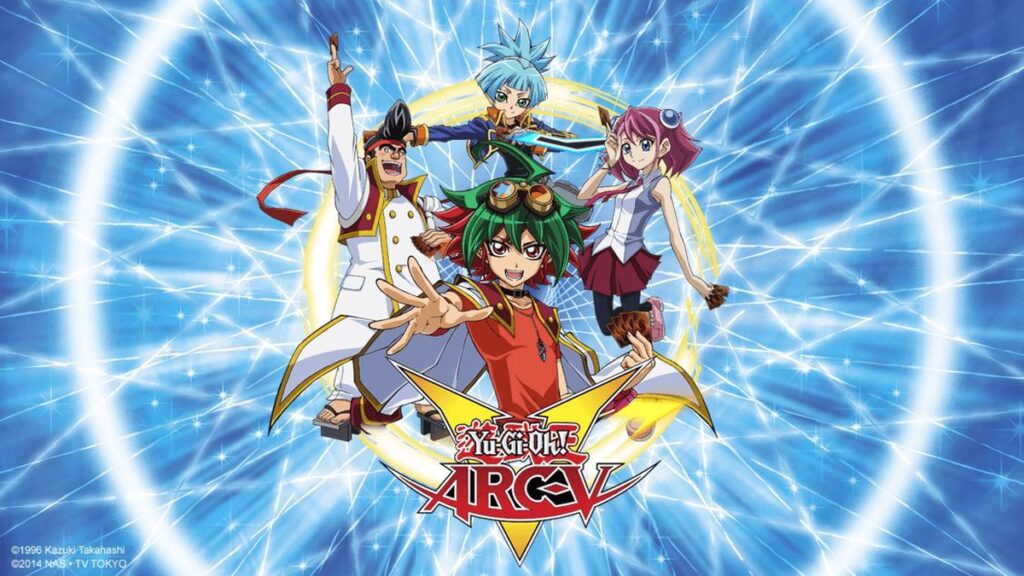 Is There a Chronological Order?

The 1998 TV anime series, and the 30-minute 1999 movie exist in a separate continuity from Yu-Gi-Oh! Duel Monsters. Good luck finding a legal copy, especially outside of Japan. Dust off the VHS player if you do find one.

The 2004 movie Pyramid of Light, based on Yu-Gi-Oh!: Duel Monsters, was produced by 4Kids. Surprisingly, it was released in the United States before it reached Japan.

Yu-Gi-Oh! Capsule Monsters (2006), a direct TV sequel to Duel Monsters, was also produced by 4Kids for the international market. It didn’t get released in Japan.

Yu-Gi-Oh!: The Dark Side of Dimensions (2016) takes place either six months after the manga conclusion, or one year after the Duel Monsters anime, depending upon the translation. So it sort of fits here, except when it doesn’t. Features Yugi and Seto Kaiba.

The movie Yu-Gi-Oh!: Bonds Beyond Time (2010) deserves its own category. The film is a time-traveling crossover featuring the protagonists of Yu-Gi-Oh: Duel Monsters, GX, and 5D’s. It does seem to confirm that 5D’s is part of the same universe as Duel Monsters and GX.

Spin-offs with some continuity

GX (2004-2008) takes place ten years after Duel Monsters, and features the next generation of duelists. It’s the spin-off with the strongest link to the original, as the Duel Academy was founded by none other than antagonist/ anti-hero Seto Kaiba. 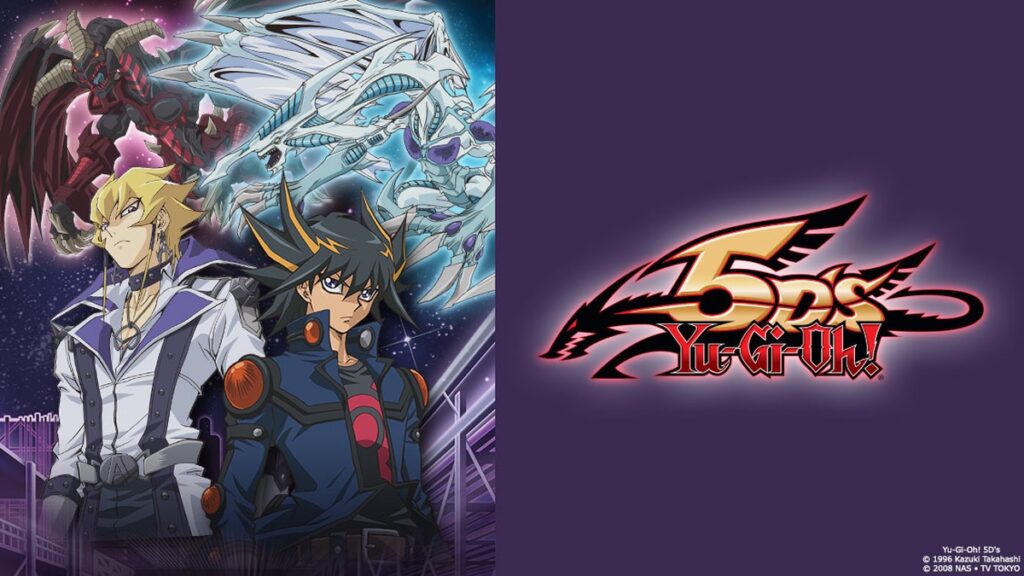 5D’s (2008-2011) is set in a dystopian, distant future. New Domino City is built on the remains of the original setting.

Zexal and Zexal II (2011-2014) has duels with augmented reality; ‘Numbers’ cards are scattered around the globe.

Yu-Gi-Oh! Arc-V (2014-2017) has duelists from other dimensions; including alternate universe versions of characters from Zexal, 5D’s, and GX. 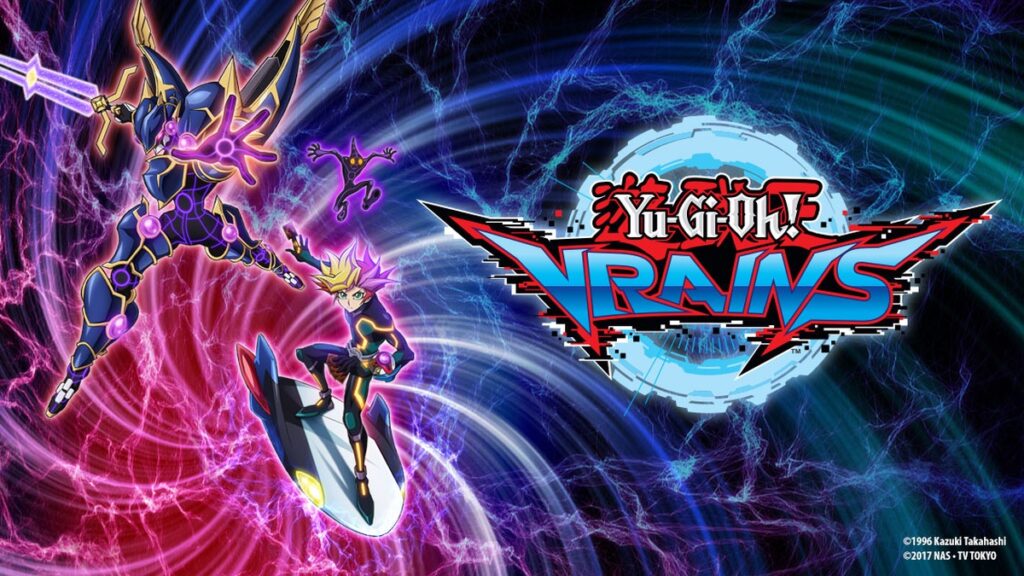 SEVENS (2020- present) has a protagonist who creates his own rules for a new style of card battle called a Rush Duel.

Yugi, Yuki, Yusei, Yuma, Yuya, Yusaku, and Yuga all have a kanji meaning ‘to play’ in their names. Yuzu, Yuto, and Yugo don’t.