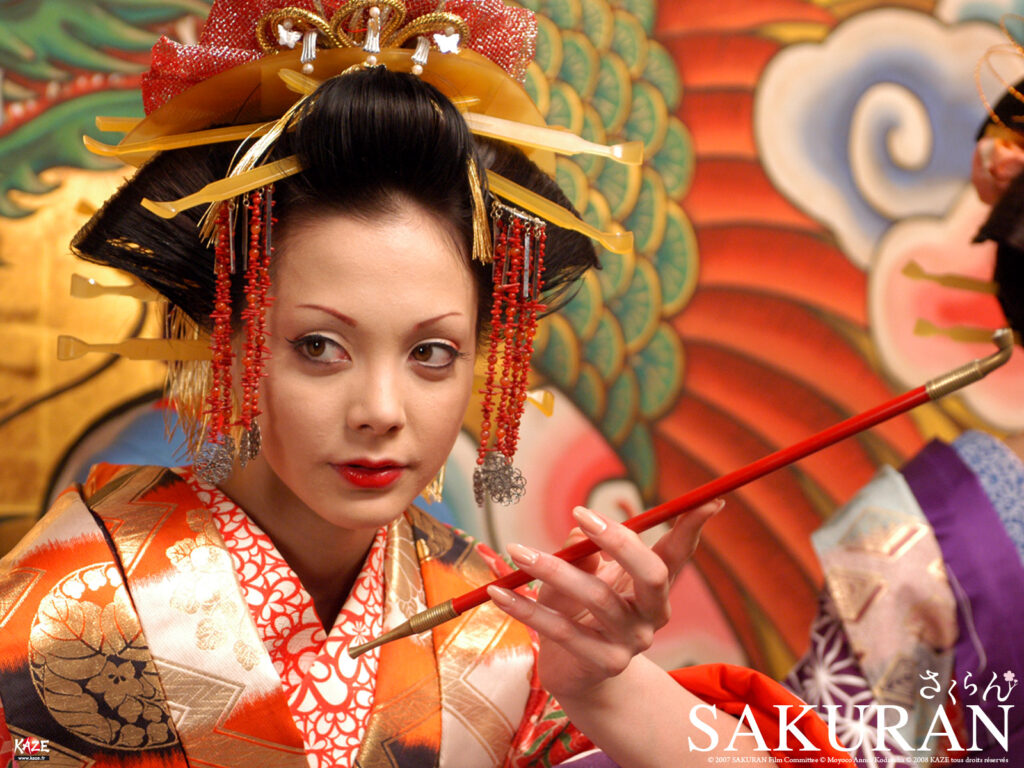 When I first spent a day trekking into New York City to catch Sakuran at a film festival sometime in the mid to late 00s, I had yet to be exposed to the undeniable genius, wit, and honesty of super-star Josei manga creator Moyocco Anno. I had, however, been exposed to the undeniable genius, rage, and conviction of Anna Tsuchiya, who provided much of the iconic music of Josei-Shojo borderline series Nana, music for which I developed a lifelong appreciation. And folks, that film was a banger. For years, I had wanted to watch the film again, especially having eventually read Anno’s incredible, lush original manga. But before the currently ongoing 21st Century Japan: Films From 2001-2020 online film-festival powered by Japan Society started, the chance to do so with subtitles hadn’t existed.

Sakuran paints an amusing but unbridled look at 19th-century Japanese brothel life; a feast for the eyes, but leaving your heart with much to deliberate on. Following a particularly gorgeously illustrated blueprint by God herself, Moyocco Anno, a unique feisty and disobedient Kiyoha finds herself manifest on screen thanks to the real-life feisty and disobedient (though undoubtedly wonderful) Anna Tsuchiya. One doesn’t need much imagination to guess that life in the brothel sucks. However, instead of portraying successive trauma, visionary director Mika Ninagawa takes the time to articulate these womens’ heartaches and these courtesans’ inner battles with aging through pristine cinematography and a strong sense of place.

I originally floated towards Sakuran blind in 200X, motivated by a desire to see Anna Tsuchiya on a big darn screen. Little did I know I’d be rewarded with a film that would stick with me until 2021, though it accomplished that captivation in no small part due to Anna Tsuchiya. In short, I can’t think of an actress better suited to handle Moyocco Anno’s eclectic and troubled Kiyoha. Lord knows in her younger days as a model, the singer/actress got into public trouble more than once, belittling her peers and indulging in party lifestyles. Seeing her work that anger and transgression out on screen, all while being clad in the most exquisite of kimonos in the most meticulously indulgent buildings, remains a wonder 14 years later.

While boldly and successfully embodied by Tsuchiya, Sakuran’s resonating beauty and rage soft-serve twist owes itself to manga artist Moyocco Anno, more than anybody; Perhaps the world’s greatest at drawing beautiful things and then drawing those beautiful things turning ugly. Hard to call any one work of hers the stand out in her legendary Josei defining catalogue, but maybe Sakuran brings out the most of her illustrative abilities, what with all its traditional Japanese clothing and traditional Japanese hairdos. Unfortunately, it remains an unfinished work, though the collected volume by Vertical leaves the story at a nice stopping point.

We could go on longer about why you should watch Sakuran, but as the article title suggests, you only have limited time to do so. Japan society’s film festival only runs till 25 February, so you have about two weeks to pull the trigger on this. Pricier than an average VOD rental, you might not want to pay the 8 bucks to rent the film but we assure you it’s money well spent for those who either: A. want a Japanese period piece B. love Moyocco Anno and/or C. desperately miss Anna Tsuchiya. If you happen to catch this article after the watching period, well, you can always learn Japanese.

You can watch Sakuran here until 25 February.