What Can We Learn From The We Never Learn (Bokutachi wa Benkyo ga Dekinai) Anime and Manga? 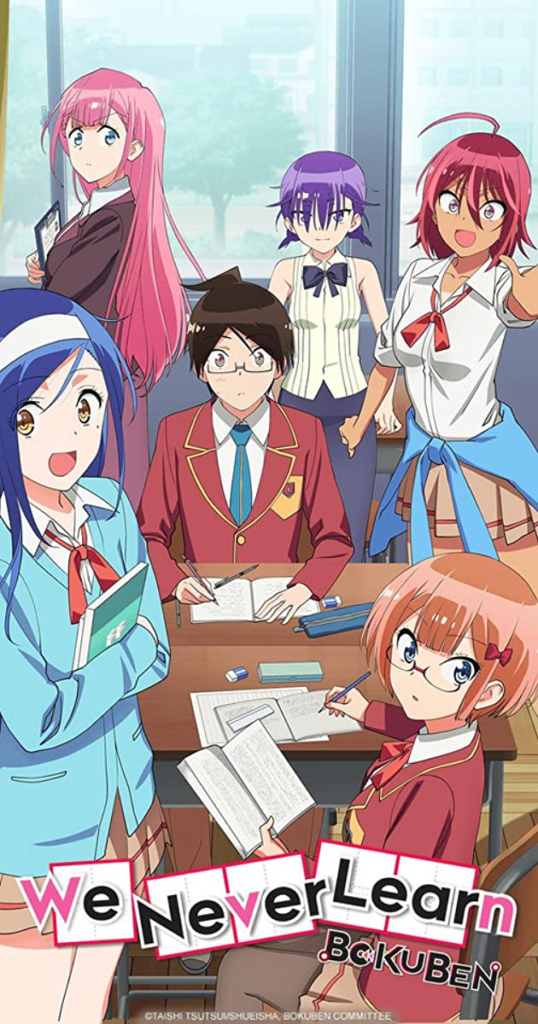 If I were to tell you I’d be talking about a harem rom-com anime about a high school guy tutoring a group of quirky pretty girls in order to advance his career, The Quintessential Quintuplets would probably come to mind.

However, it turns out that there was another, less-advertised series that debuted around the same time as The Quintessential Quintuplets with almost the same exact premise…

And that would be Taishi Tsutsui’s most well-known manga-turned-anime Bokutachi wa Benkyo ga Dekinai, localized as We Never Learn for its official release in English.

The manga was published by Shueisha Inc. in 2017 and is still ongoing as of 2020. The anime adaptation that followed in 2019 was produced via the collaborative efforts of the more obscure Studio Silver and new and upcoming Arvo Animation, the latter also being the talent behind the anime adaptation of light novel Monster Girl Doctor.

While We Never Learn may not hit the ground running with five girls from the get-go for our glasses-laden protagonist to choose from, it quickly gets to that point.

However, unlike The Quintessential Quintuplets, the “hook” for We Never Learn lies not with the anticipation of who our guy will pick in the end (even if one of the love interests in questions happens to be a teacher), but rather how each of his endings will play out.

In other words, We Never Learn is a choose-your-own-ending kind of deal.

What Is We Never Learn?

We Never Learn follows book-smart, but dense Nariyuki Yuiga as he attempts to pay his way through college by securing a special recommendation from his headmaster.

And as if the headmaster knows he and Nariyuki are in a harem anime, he agrees to the recommendation on the grounds of the latter tutoring two girl geniuses struggling in their weaker subjects.

A project that quickly takes a turn into three-girl territory with the arrival of an old middle school friend of Nariyuki’s hoping to become a sports star.

The show proceeds to follow a slice-of-life formula by which the trio develop feelings for their oblivious tutor all the while having to maintain their grades. We also get occasional visits from two other girls to spice things up every so often.

The unwarranted crushes, sexual tension, and “study sessions” typical of this set-up are immediate, palpable even, from the start, but upon looking into the season finale, I must say I was surprised by the turnout.

Who Are The Ladies?

But didn’t I mention earlier that We Never Learn has multiple endings?

Though the anime and manga are both technically over and done with (with an obvious preference for one of the girls), mangaka Taishi Tsutsui plans on releasing four alternate endings for the manga in due time. Through this method, We Never Learn fans may see to the fate of their best girl and/or ship of choice.

With that said, who are these ladies set to learn an unexpected lesson or two on love?

The pair of students assigned to Nariyuki in Episode 1 are humanities-oriented Fumino Furuhashi and math prodigy Rizu Ogata. Fumino and Rizu act as parallels to each other in that they handle their emotions in vastly different ways, the former being open despite strains within her family and the latter, content, but desiring to become more attuned to her feelings.

In Episode 2, game-changer swimmer Uruka Takemoto is introduced. Uruka’s loved her friend Nariyuki since their days in middle school, but harem shenanigans prevent the girl from finding the closure she so desires.

The last two girls thrown in the mix are Fumino and Rizu’s previous tutor Mafuyu Kirisu, a strict teacher with a thoughtful side, and unenrolled student Asumi Kominami.

While harem anime and manga aren’t this particular writer’s thing due to their tendency to reduce female characters to caricatures, I do appreciate the extra lengths We Never Learn goes to flesh out the ladies’ personal ambitions, strengths, and weaknesses.

This quintet’s traits are exaggerated whenever the plot deems it convenient, of course, but the characters themselves are far from one-note.

Why Are The Ladies?

Don’t get me wrong, I know writing alternate endings and stories isn’t anything new.

However, it’s refreshing to see works with enough respect for their female characters to conceive fully fleshed-out love stories for them (even if the endgame ship should come down to one girl). You’re allowed to like what you like, but too much of anything can get boring real fast, fanservice included.

Most harems either boil down to one girl getting the guy or the entire group of potential love interests having to “share” said guy.

And to be frank, I seriously doubt the demographic for harems is interested in the latter for its exploration of polyamory, self-fulfillment, etc.

We Never Learn is full of fluff, lots and lots of eye-rolling fluff; and yet, there is a level of respect, of self-awareness in regards to the ladies being privy to their own wants.