Love comedies have been a staple in the pages of Weekly Shonen Jump for decades now, providing much needed relief from the more serious battle action series that dominate the magazine. And from within the love comedies serialized in Jump right now, this year’s events surrounding Valentine’s Day have clearly shown that Bokutachi wa Benkyou Dekinai or We Never Learn is the king.

First up, we have the front cover for this week’s issue (no. 11) of Weekly Shonen Jump. Featured on the cover is Tsutsui Taishi’s We Never Learn alongside Miura Tadahiro’s Yuuna and the Haunted Hot Springs, another love comedy currently serialized in Jump. These two series have essentially been tasked with representing love comedy in Jump for the wider world to see, which is especially important in the magazine’s Valentine’s Day issue. 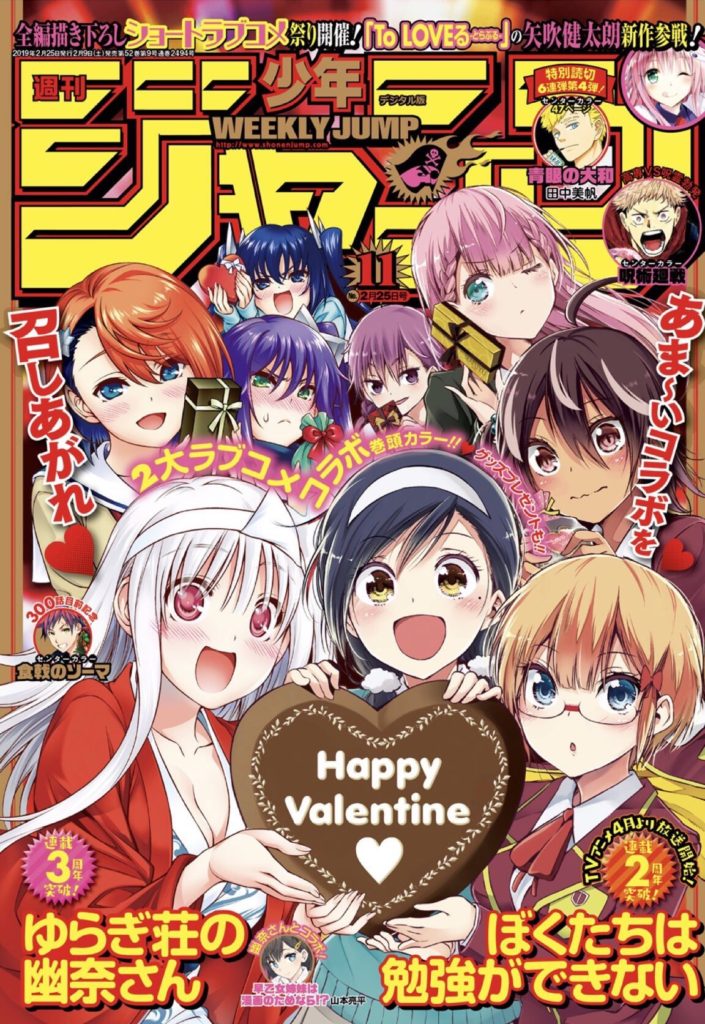 Also featured in the issue is a collection of short manga titled ‘Love Comedy Festival.’ These manga have been drawn by authors much more famous and well-known than the above series’ creators, including the likes of To Love-ru creator Kentarou Yabuki. Weekly Shonen Jump definitely could’ve drawn in a fair few people on the basis of that premise alone, but the fact that they chose to go with their currently serialized series shows not only their loyalty to their own properties, but their faith in them.

Yet out of the two series featured on the cover, only one is set to hold a Valentine’s Day event. That series is none other than We Never Learn, which is set to take over the Akihabara GAMERS store on Valentine’s Day itself. In GAMERS from 12 onwards, free clear files featuring an illustration by series creator Tsuitsui Taishi will be given out for free.

Obviously, this event is also part of the promotion for the upcoming We Never Learn anime, but on a deeper level this shows us that Shueisha is counting on We Never Learn more than Yuuna to represent it’s love comedy brand. No doubt this is due to the higher sales of the We Never Learn anime as well it’s higher rankings in Jump’s reading when compared to Yuuna.

No doubt Shueisha will continue to rely on We Never Learn going forward, especially given that the profile of the series will no doubt rise significantly as a result of it’s upcoming anime adaptation. VIZ Media is currently publishing We Never Learn as part of their English-language Shonen Jump.