In July of 2019, the animated film Weathering With You was released to theaters in Japan. Its director, Makoto Shinkai, was a known name in the industry before surging to the top with his 2016 release of Your Name. Which is still the highest-grossing anime film of all time. Needless to say, the excitement for this film started strong from the get-go.

The film was announced in December of 2018, along with its title and Japanese release date. The announcement caught the attention of many since Your Name. was such a huge hit.

Although the film would not dethrone the Your Name. in terms of financial success nor would it be as universally praised in comparison, the film would still meet much of the hype as it released to positive reviews. It would receive a theatrical release in the United States in January of 2020, allowing fans to watch the film with the original Japanese dub or with a brand new English dub. It now has a Japanese Blu-ray release date of May 27th, 2020.

What Is This Movie About?

The general synopsis is that the story follows a high school boy, Hodaka, who runs away from his home to the bustling city of Tokyo. Although he initially goes there with high hopes that the city will be one of endless opportunity, he quickly discovers that living there is easier said than done. As cheap as he tries to get by, it only seems to be delaying the inevitable as his finances start to run out.

With luck, he manages to land a job as a writer for a magazine that specializes in the occult and urban legends. Their current topic of choice: Figuring out why there’s been so much rain in Tokyo. As if by fate, he manages to meet Hina, an orphan girl. He soon finds out that she’s the “Sunshine Girl” he was looking for; she has the ability to stop the onslaught of rain and bring sunshine.

The two of them come up with a plan that will allow Hina to use her powers to make people happy. Together they become close and enjoy the happiness that Hina brings. But they both come to learn that there are consequences for messing with nature. 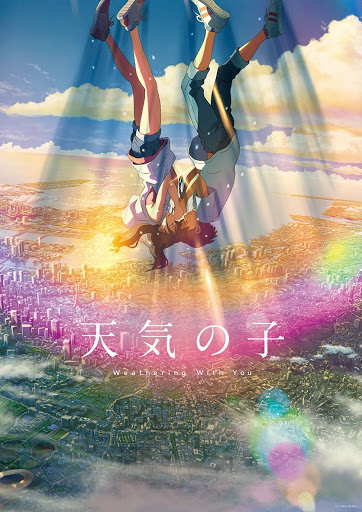 I don’t want to go too far in-depth about the story (the above is all from trailers and descriptions), because as popular as it is there are still those who didn’t get to watch it. I assume this is especially possible for fans in the U.S. if they missed the limited theatrical release. If you are interested in learning a bit more about the story, you can read up on a pretty spoiler-free review from one of our writers back when the film was released in Japan.

How To Watch It

As I said before, the film does have a Blu-ray release of May 27th. There are listings of various editions of the movie, depending on which media type you want (Blu-ray or DVD) and whatever bonus items you’d like from framed illustrations, umbrella covers, and mugs. The catch is that this is the Blu-ray release for Japanese.

What does that mean for fans in the West? Well, actually you could still enjoy the movie nonetheless. You can pre-order it now and watch it as soon as it ships out to you. Certainly, a lot of people are going to buy the Blu-ray release of this to see the beautiful animation at home.

As this release is for Japan though, the only audio option will be the Japanese dub. It does have subtitles in English so you’ll be able to read along in case you don’t understand Japanese! But, there isn’t any option to listen to the English dub if you were a fan of it.

What About the US Release Date? Online Streaming?

As of this moment, there hasn’t been a date set for the U.S. home media release of the film. It’s certainly disappointing, but I honestly can’t imagine them not releasing Blu-ray sets and such for the U.S. as well.

For what it’s worth in comparing, Your Name. had an initial Blu-ray release in Japan about 11 months after the theatrical release (while Weathering With You had a 10-month window), and in the U.S. four months later. With everything being impacted by COVID-19, it’s possible that it could also have an effect on the eventual U.S. release.

Since there hasn’t been anything telling of a physical release, this also rings true for news about a digital release. Your Name. would go on to be available on various digital/streaming platforms, so one would hope that Weathering With You would similarly be picked up for digital and streaming purposes. The film still had an incredible run in the box office, so I’m hoping we hear any news involving releases in the West sooner rather than later.

If you never got the chance to watch it and have regretted every second that’s passed since then, you should probably treat yourself and pre-order the Japanese Blu-ray release. If you don’t mind waiting and the English dub is more of your jam, all you can do now is cross your fingers while waiting to hear updates. Either way, I can say from experience that you’ll have a wonderful time when you watch it and it will have been more than worth your wait.