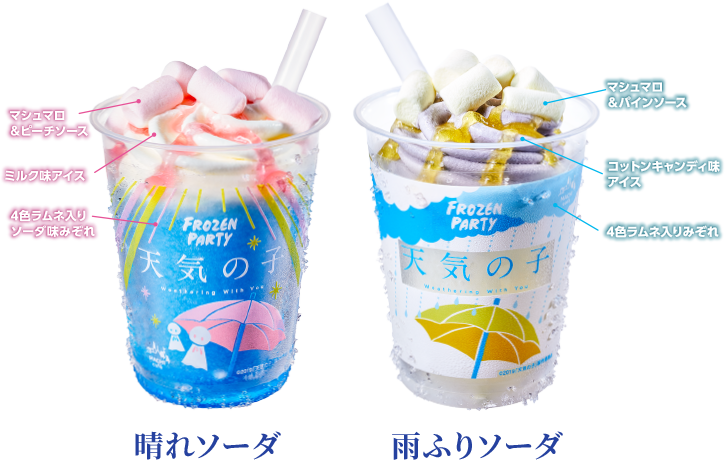 Did you hear? Makoto Shinkai is kind of a big deal now. I mean, he even has a collaboration with Uniqlo and everything. With the director having become a household name thanks to the phenomenal success of his 2016 film Your Name, a film that currently stands as having the second-highest box office revenue of all time in Japan for domestically-produced films behind the Studio Ghibli Oscar-winning classic Spirited Away. To call Weathering With You, the director’s newest release, the most anticipated film of the year in Japan would be an understatement.

You walk through a train station in Japan? Expect to see an advert for the film. Go to a cinema in Japan? Expect to see adverts plastered on the side of every cinema you can find, with ads also playing on the big screen before every single film releasing in Japanese cinemas at the moment (I’ve yet to see a film in the last 2 months where I haven’t seen an advert for this film in the pre-roll, except for independent cinemas). And then you get to the collaborations, which range from the aforementioned Uniqlo shirts to the more… unique collaborations. During a screening of Your Name on Japanese TV, adverts for a variety of companies played that utilized original animation featuring characters from the upcoming film were shown, the most unique being the one for Softbank, where the iconic Softbank dog bragged about a cameo they have in the film.

I have to say though, the way to this girl’s heart is through her food, so collaborations involving food in some form are the ones that end up catching my eye the most. While walking home and grabbing food from the convenience store last week, I noticed that Lawson were promoting a special ‘Frozen Party’ iced drink that tied in with the upcoming Weathering With You film, and I knew I had to try it the moment I saw it. Without a second thought I bought it, later buying the second flavour in order to see what it was like, and am happy to report my findings on this most tasty of assignments.

First, an explanation. A new item available for purchase at Lawson convenience stores, the Frozen Party is a mix of slush, ice cream and more in a plastic cup that you purchase from the freezers within the stores. Upon taking it to the till, the store clerk will ask if you want it heating up, at which point the drink will spend roughly 30 seconds in the microwave in order to thaw the slush without completely melting it, making it ready to drink by the time you return home. Outside of the Weathering With You collaboration, you can get a variety of flavours from a tasty-looking chocolate flavour to an admittedly less-appertising cheese macha flavour from any Lawson.

For Weathering With You, two new flavours are being sold for a limited time. There’s the ‘Sunny Soda’ flavour, which has marshmallows and peach sauce in ice cream mixed with an ice slush containing 4 different flavours of ramune candy. With the sunny flavour, the peach sauce has been replaced by pine sauce as well as a different flavour of ice slush. 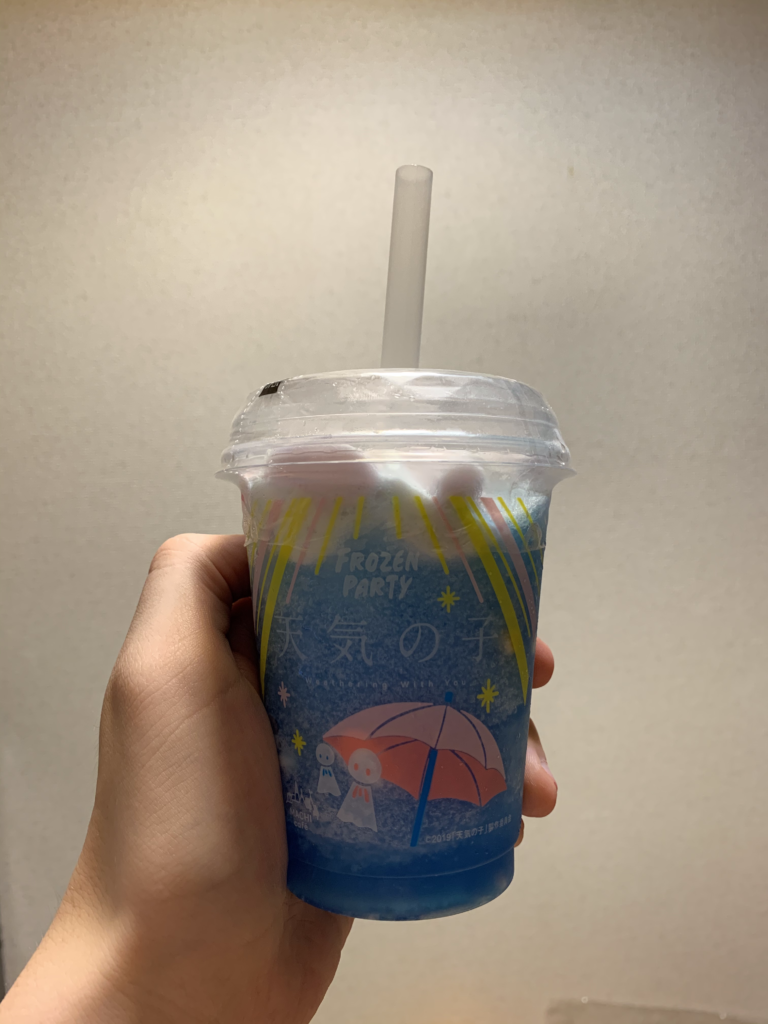 At the moment, even though it’s raining (rather fitting for the film the drinks are based upon), the air can feel rather humid at times, making a drink such as this almost perfect for days such as these. Although they aren’t cheap, and perhaps are a little overpriced for what they offer (costing 330yen), they are nice, and I can imagine that when the summer reaches a peak these drinks will be perfect to take the heat off those days.

You won’t be able to drink all of this through the straw. Admittedly, this perhaps would be better served as a traditional ice cream instead of as a drink, as the marshmallows and ice cream will have to be eaten separately. In a way though, this enhances the drink, as you can drink the ramune-infused slush with a hint of the ice cream on top and then finish things off with with a spoon for the ice cream and marshmallows that top it off. I’ve been having one at the end of a long day alongside my meal, although I have had to limit myself to only doing this once for each flavour because, as I mentioned before, this isn’t cheap!

Saying that though, it’s a sign of how much times have changed for Makoto Shinkai thanks to the success of Your Name. While it would be misleading to describe the director as unpopular before that film’s release, as he was still a known figure within anime, his recognition and general popularity was nowhere near what it is today. A collaboration cafe (one whose limited-time duration was extended multiple times due to the unexpected success of Your Name) was about the limit for collaborations Shinkai was involved in before, yet this Frozen Party drink is just the start of the collaborations this time around, and isn’t even the only food-based collaboration Makoto Shinkai is involved in with Lawson as part of his attempts to promote Weathering With You. 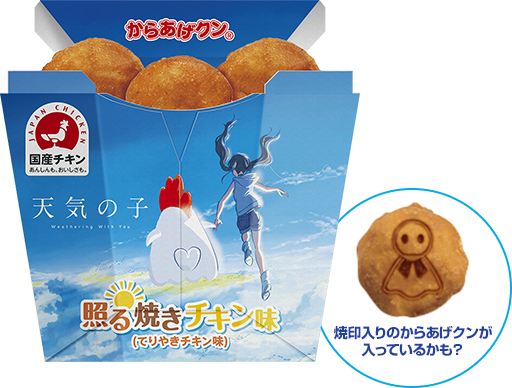 A few days after the film has released on July 23rd, Lawson will begin selling a special version of their Karaage-kun chicken bites with a special Weathering With You Teru Teru Bozu design on each piece of chicken. Teru Teru Bozu-shaped gummy sweets, lemonade, bagged popcorn, salad and more will be available too, making it possible to purchase the perfect cinema food accompaniment from Lawson. While its not food-related, in case the film makes you cry (I have my fears this may be my reaction to the film), you can also buy themed tissues from the store to dry your tears.

This is just factoring in the collaborations from this one store, too! The transformation of Makoto Shinkai from a respected anime director to the hottest name in the Japanese film industry is, ironically, exemplified by the cold taste of a Weathering With You frozen ice slush drink from Lawson. How times have changed, as the director has become the most exciting name and, in turn, the name that every company wants to collaborate with. Lawson, Uniqlo, Softbank and more, all of the biggest companies want to attach their name to his work. As a fan of Shinkai’s work since 5 Centimeters Per Second, it’s nice to see his hard work being rewarded in such a big way.

All of this will culminate in Friday’s release of Weathering With You, as the first film the director has released since Your Name is released into cinemas in Japan. You can bet that we here at OTAQUEST will be reviewing this film, so make sure to keep an eye out for that.

Hey, maybe you could have a Frozen Party while you wait… here’s hoping the movie is as refreshing and nice as that drink.