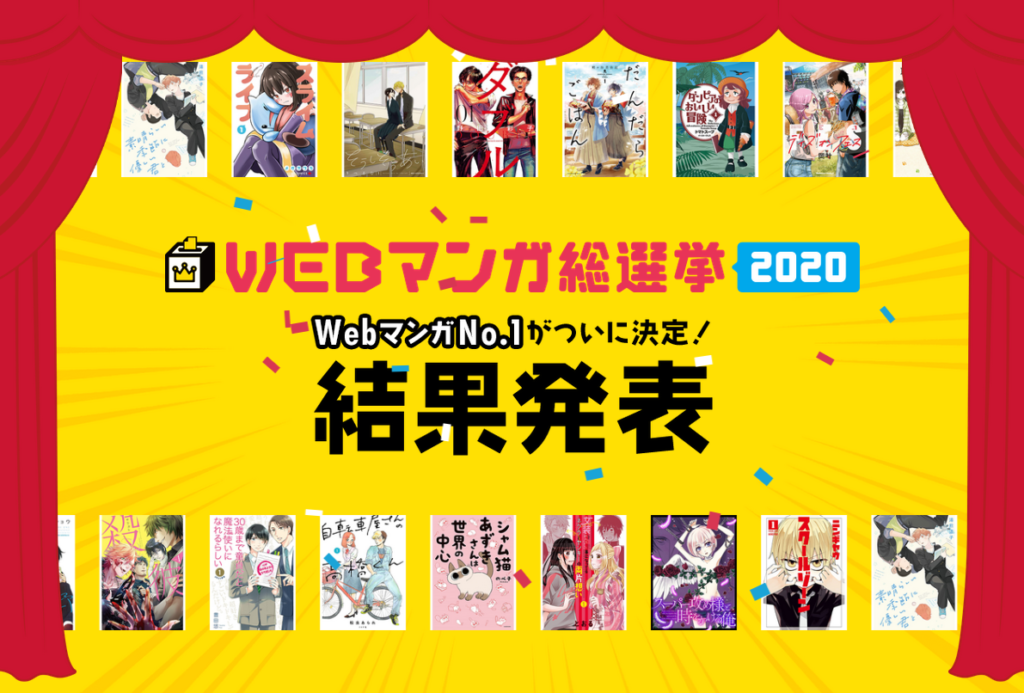 After three months of voting and over 800,000 ballots cast, the Web Manga General Election has finally chosen its winners for 2020. This initiative, launched by Pixiv and Nippan in 2017, aims to find “the most loved web manga right now” through user voting: previous winners include Wotakoi: Love Is Hard for Otaku by Fujita in 2017, 47 Taisen by Hifumi in 2018, and My New Boss is Goofy by Dan Ichikawa in 2019.

But how about this year? Coming in at the top of this year’s 2020 Web Manga General Election is none other than Kanato Oka’s Days on Fes, available in English soon via Yen Press. This music-themed manga is currently serialized in Comic NEWTYPE and drew praise from Uchikubi Gokumon Doukoukai frontman Atsushi Ousawa last year when he said: “I wonder what it was, the festival looked so fun that I started crying…” Clearly, that praise was not misplaced.

Taking second place was Otoge ni Trip Shita Ore♂ by Ikusa Kano, a manga about an unsuspecting college student who finds himself suddenly transported into an otome game. Third was Cherry Magic! Thirty Years of Virginity Can Make You a Wizard?! by Yuu Toyota, which came in fifth last year. Both of these series are published via Pixiv Comics.

As you might be able to tell from the manga mentioned, the Web Manga General Election tends to spotlight female-oriented series. While Days on Fes has a more universal appeal, such series as Otoge ni Trip and Cherry Magic! undoubtedly enjoy a BL-type flavor. Nevertheless, all of them are published online, and many are available entirely for free: such quality and popularity (as evidenced by the amount of votes) go a long way in pushing the manga industry further and further towards a digital-only future.