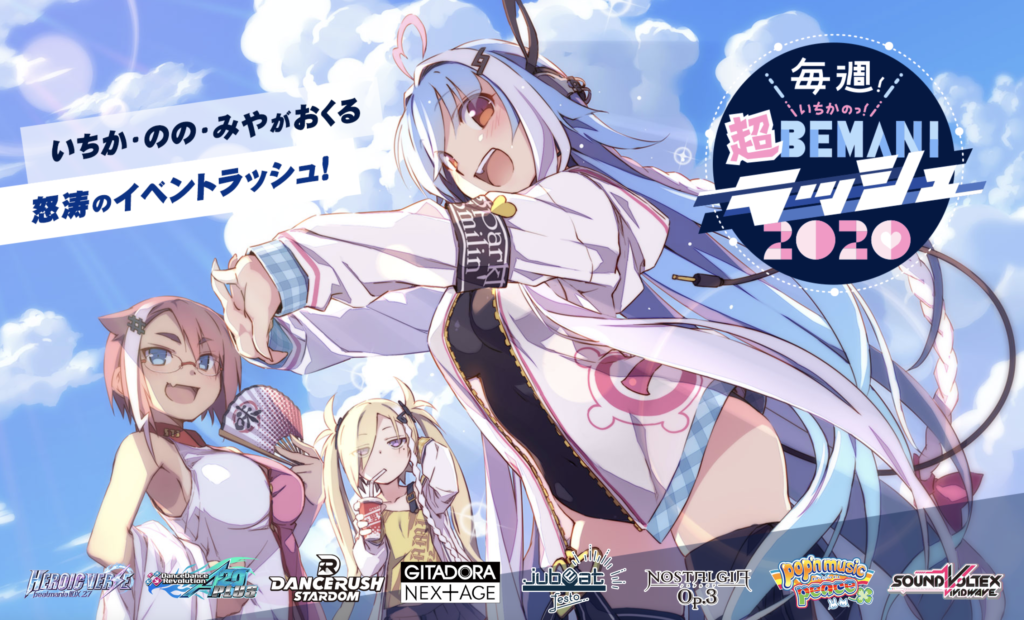 Konami is no slouch when it comes to thinking of innovative ways to implant its vast library of bemani songs into other bemani titles where the song did not originate from, and their newest online event is no different. Dubbed “Weekly Bemani Super Rush 2020”, the event has players participate in a number of online events such as card games to earn points to spend on unlocking specific tracks in-game, to actually playing a certain game to unlock a song in another game. Think of it like Sound Voltex’s Cross Infection, but on a grander scale. Last week we covered the songs which were added to the various games, and this week we have a new set of songs to cover.

Weekly Bemani Super Rush 2020 started on July 29th, 2020, and runs until October 29th, 2020, and allows players to unlock songs from various bemani games to be played in games in which the tracks did not originate from. For example, Camellia’s song from Dance Dance Revolution A20 Plus, ‘Orca’, can be played in beatmania IIDX 27 Heroic Verse by playing one game of Dance Dance Revolution A20 Plus, or by playing 10 games of beatmania IIDX 27 Heroic Verse. With this method, even if you don’t play the full gamut of bemani titles, you can still unlock each song which is part of the event.

Today, Konami has released the newest wave of songs to hit their bemani series of games, and those songs are:

With a little over a month remaining in the event, it will be interesting to see what Konami will be adding to the game. As mentioned before, there is still one more character that has yet to be utilized in the unlock event, so I am even more interested to see what is hiding behind that door.