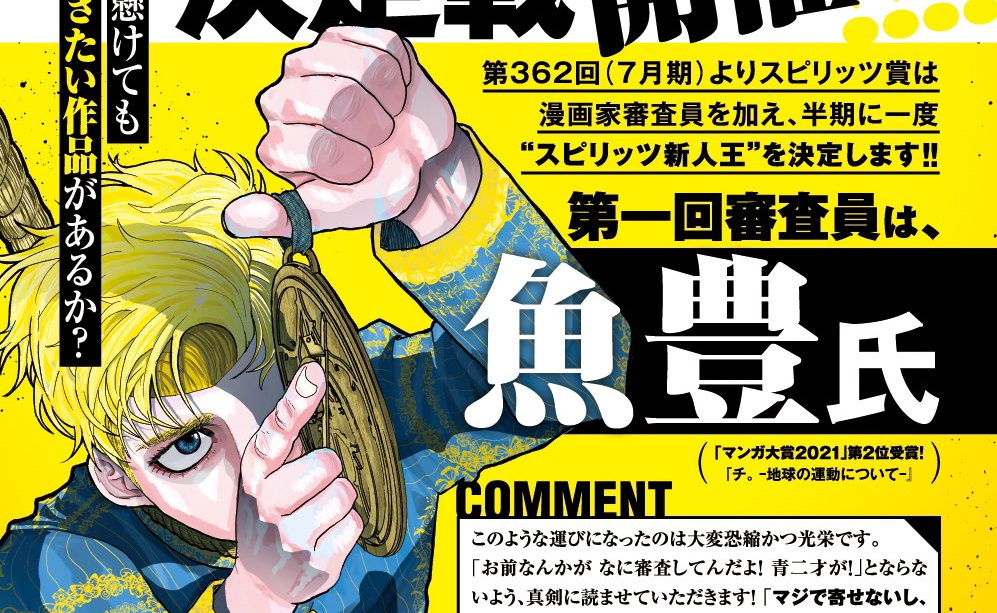 Weekly Big Comic Spirits has rebranded their newcomer prize as the ‘Spirits Rookie King Playoffs’ with a very suitable author acting as the first judge: Uoto.

Despite being just 23 years old, Uoto has managed to enthuse fans and critics alike with his sophomore series about science and religion Chi. -Chikyuu no Undou ni Tsuite-. It isn’t his first major work, mind, but this success has still come in the very early part of his career: quite recently, it was reported that the series had surpassed 700,000 copies in circulation. That’s quite a lot.

With this in mind, there’s hardly an author better suited to judging the revamped Weekly Big Comic Spirits newcomer prize. Previously, the magazine had held some sort of rookie competition every month, but now they are switching to a slightly longer timeframe of twice per year. Although the reasons are unknown, a shake-up in the format and an exciting new title might just provoke more interest and therefore more entries.

Speaking about the honor of being the judge for the very first ‘Spirits Rookie King Playoffs,’ Uoto remarked that ‘I’ll read the entries seriously so that people don’t complain about why the hell someone like me, a complete greenhorn, is judging a competition. In fact, I’m looking forward to reading manuscripts from people who don’t really give a crap and are just doing what they want. (Sorry for saying something presumptuous)’.

He really shouldn’t worry too much about his age or his relative lack of experience, because his work already speaks for itself. In many ways, if there’s anyone who can successfully find and elevate a newcomer for Weekly Big Comic Spirits, it’s Uoto.

Submissions are open now until December for the revamped Weekly Big Comic Spirits newcomer prize. Don’t hesitate to check out the official website for more information!

Review: ‘Chi: Chikyuu no Undou ni Tsuite’ and the Role of Religion in Medieval Europe