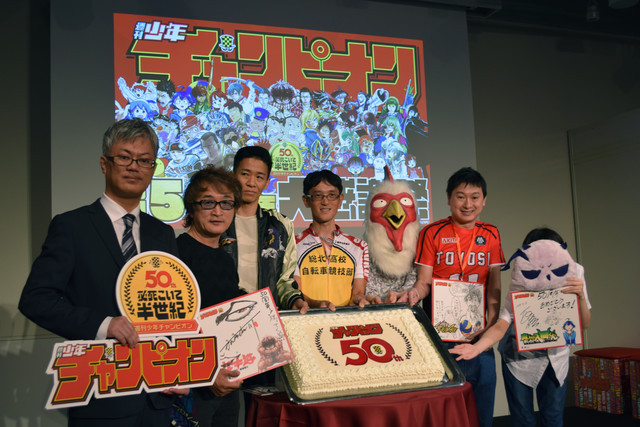 After months of painstaking planning and an extensive crowdfunding campaign, Akita Shoten finally held it’s Weekly Shonen Champion 50th anniversary event in Akihabara this weekend. Both fans, editors and mangaka alike were in attendance – along with a fair few animal friends that BEASTARS author Paru Itagaki brought along with her.

Weekly Shonen Champion’s 50th anniversary ‘Fan Thank You Festival’ event had a jam-packed schedule, as Akita Shoten took over the gallery in Akihabara’s UDX building for the day of July 15.

Talk shows and stage events made up the bulk of the events, but walking around the show floor also revealed the success of all three ‘Dream Project’ crowdfunded installations. These included a giant balloon Midousuji Akira from Wataru Watanabe’s Yowamushi Pedal, a georama of Baki Hanma’s house from Keisuke Itagaki’s BAKI the Grappler, as well as a giant, huggable John teddy from Itaru Bonnoki’s The Vampire Dies in No Time.

Another set of ‘projects’ present were the ‘Select Manifestos,’ which fans got to vote on during the lead-up to the event. One of these projects, introduced in the very first round, was a stage show with BEASTARS author Paru Itagaki, where she would ‘introduce’ the animals she’d most like to meet.

As you might expect from a professional anthropomorphized animal mangaka, the animals that Itagaki chose for the Weekly Shonen Champion 50th anniversary event were far from ordinary.

Firstly, Itagaki ‘introduced’ an iguana, explaining that “I love iguanas, but keeping them at the right temperature is hard so I can’t really keep one as a pet.”

Itagaki then ‘introduced’ a duck alongside a chick, explaining that “I think of ducks as the representatives of all domesticated birds. Their features and their wings are also really beautiful. But they also have quite a stern call, which gives them a bit of an idol-like ‘gap.’”

It’s quite clear from these statements that Itagaki put a lot of thought into her choices for the 50th-anniversary event – even if the logic of these choices might be lost on someone not as invested in animals as she is.

You would expect no less from the chief of Weekly Shonen Champion, but the importance of the magazine has definitely been on show these past couple of months as Takekawa discussed it’s past legacy and it’s future potential in the manga industry with the editors of the three other weekly shonen manga magazines.

With the event’s conclusion, the festivities for Weekly Shonen Champion’s 50th anniversary are now largely out of the way – so here’s to 50 more years, Champion.