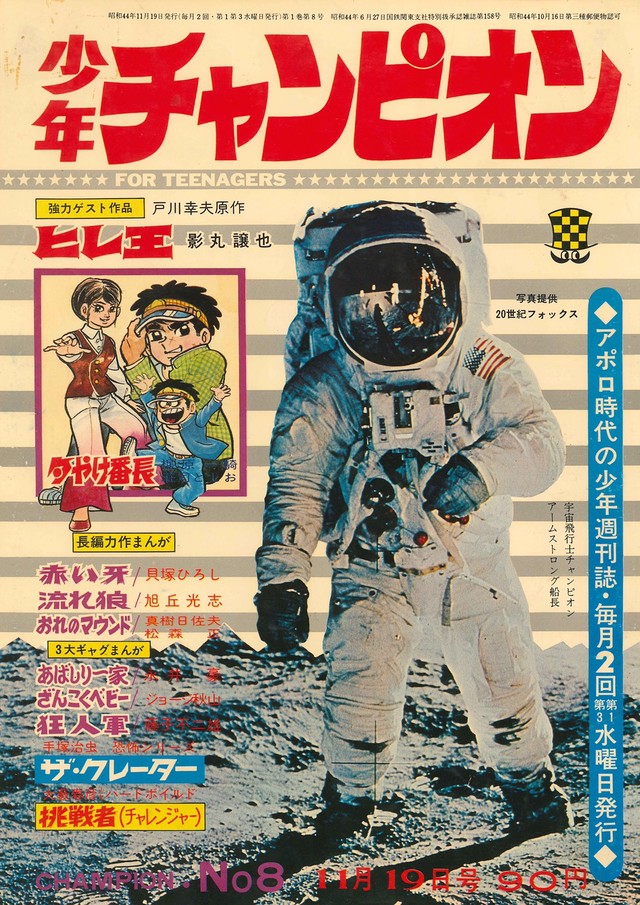 Did you know that it’s Weekly Shonen Champion’s 50th anniversary this year? Well, if the multitude of interviews, events, and merchandising didn’t clue you into that fact, maybe an intergalactic voyage will; one that’s also sharing a 50th this year – the 1969 Apollo 11 moon landing.

Akita Shoten launched their latest Weekly Shonen Champion’s 50th-anniversary campaign on July 17, with a video that celebrates both the 1969 moon landing as well as their own magazine’s 50th anniversary.

This video comes off as a little tongue-in-cheek, as they essentially “hijack” the Apollo 11 moon landing 50th anniversary with their own Weekly Shonen Champion 50th – literally adding in tiny text that “It’s our 50th, too” and ending with the tagline “50 years of damn hard work.”

It’s perhaps this tongue-in-cheek messaging that has also led to a rather aggressive push on Akita Shoten’s part towards famous astronauts, cosmonauts, and professional lovers of space.

The first targeted by Akita Shoten was, quite naturally, NASA – the American space agency that launched the Apollo 11 mission back in 1969. They congratulated the agency on the 50th anniversary but also asked them to “please watch the celebration movie we made. Thanks!”

@NASA ,It’s a bit early, but we’d like to congratulate you on the 50th year from the first Moon Landing. This was a great day in history. And please watch the celebration movie we made. Thanks!#NASA #Apollo11 #MoonLanding #Apollo50th #WeeklyChampionMagazine pic.twitter.com/Hc9uwEGVw8

Now, this tweet is mainly quite funny because of how flippant Akita Shoten and Weekly Shonen Champion come off, but this is mainly due to the less than perfect English.

Switching to Japanese, they give off a more polite impression but are no less strangely aggressive as they targeted Chuya Koyama, author of Space Brothers, which is currently serialized in Kodansha’s Weekly Morning.

Given that Champion is a manga magazine, perhaps targeting the leading space manga out there was a matter of course. At least they were a little more polite about it this time, cordially inviting the “brothers who love space” to “celebrate together with us.”

Clearly not satisfied with fictional space-goers, however, Akita Shoten then started to target real-life cosmonauts with their Weekly Shonen Champion Apollo 11 video.

These included the first Japanese astronaut to work on the Internation Space Station (ISS) back in 2000 Koichi Sugata (see above), as well as Soichi Noguchi, who will be going to the ISS later this year and will play the role of “astronaut ambassador” to the Tokyo 2020 Olympic and Paralympic Games, alongside a Gundam Gunpla.

In terms of Japanese space exploration, these two are some of the biggest names out there, so Akita Shoten have set their expectations pretty high. What were they even expecting, though – a retweet for free exposure?

The publisher’s aggressive quest for confirmation from the Japanese space-faring community even lead them to target those who are only tangentially involved with space, such artist KAGAYA and planetarium technology company Megastar CEO Takayuki Ohara.

You can see above some of KAGAYA’s work in making videos for planetariums, which Takayuki’s company develops technology for, and I have to admit that it’s pretty cool stuff. But, for Akita Shoten and their Weekly Shonen Champion Apollo 11 video, is it really worth such an aggressive advertising campaign?

If I’m honest, it makes the publisher look a little pathetic. Weekly Shonen Champion already has plenty of excellent tools at its disposal to gain exposure – BEASTARS is one of the best currently running shonen manga out there – so why not use those?

In any case, the aggressive campaign seems to have failed. None of the persons targeted with the Apollo 11 video have responded, and the original hasn’t even surpassed 1000 retweets. Looks like this is more of an Apollo 13 than an Apollo 11 this time around, Weekly Shonen Champion.