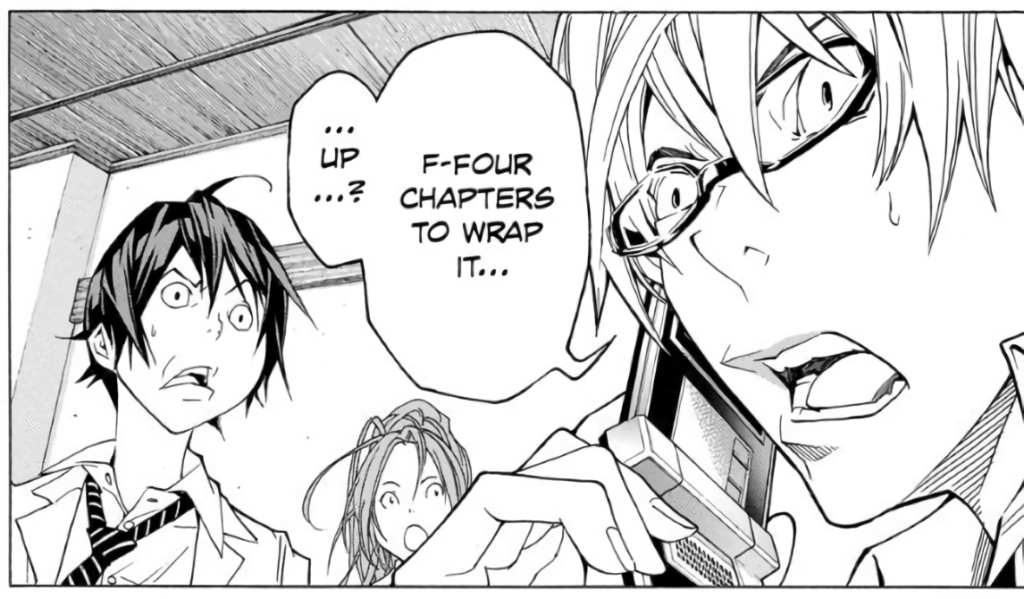 Weekly Shonen Jump Survival Guide: How to Deal With Cancelation

Cancelation is part of the very DNA of Weekly Shonen Jump. Part of the reason why Shueisha’s magazine has been so successful over the years is because of its cutthroat editorial policy, canceling any series that doesn’t see immediate commercial success. This is remarkably different from the other weekly shonen magazines, which generally tend to afford newer series more time to prove their worth.

As such, anyone who follows Weekly Shonen Jump on a regular basis will no doubt have to deal with the heartbreak of cancelation at some point or another. For me personally, I’ve been greatly affected by the cancelation of such series as Noah’s Notes (an incredibly original fantasy series that deserved more time to develop), Mitama Security (my favorite gag manga with which I developed a complex relationship) and Act-Age, which recently came to an end after a series of shocking controversies.

How do you deal with this situation? That’s the question I’ll be attempting to address throughout this article, although we’ll need to get a couple of things out of the way first. Firstly, this article will be heavily focused on Weekly Shonen Jump, but that doesn’t mean you can’t apply these lessons to cancelations in different magazines or from different publishers. Secondly, all this comes on the provisory that it would be morally right to continue to bat for any given canceled series – obviously, when it comes to Act-Age, I can’t personally condone that.

But without further ado, here are three things that you can do to deal with a Weekly Shonen Jump cancelation.

You know those people who spend all day on Twitter replying to popular tweets with fan made videos? Yeah, those ones. You know the ones. They may be very annoying, but they do get the word out.

That’s the first duty of anyone who is taken aback by a Weekly Shonen Jump cancelation: tweet about it, shout about it, write about it. It’s very possible that if you raise enough of a fuss, it might just come back.

Although you’re obviously more than welcome to make a fancam video – Joh Mitama fancam, anyone? – there are definitely ways to go about grabbing people’s attention that are significantly less annoying. The first one would be to post about it: talk about the ending, what made the series so special to you, and let others know about it. The second would be theming your profile(s) around it: if you love something enough to be sad about its ending, then your profile picture is definitely worth dedicating to it.

Of course, you should temper your expectations. When it comes to Weekly Shonen Jump, there isn’t much prospect of a series coming back after going through a cancelation – usually because the fanbase isn’t there to begin with. Nevertheless, if anyone is going to raise a fuss about it, it’s going be the vocal minority – only, try to be conscientious, and don’t go about harassing any professionals or creators. Seriously. That’s not going to earn you any sympathisers.

Part of my job is to raise a fuss about things, which is why I’ve written so many pieces about series ending as of late. Hopefully, I’m doing my part to grab people’s attention, although strength does come in numbers. So if you can get a group of friends around you, then even better – I’m sure you’ve all seen those people who swan about with some sort of ‘#HIVE’ in their bio; they’re probably the closest the Weekly Shonen Jump community gets to fancammers, but so be it.

Something a little more concrete that might help you to deal with a Weekly Shonen Jump cancelation is supporting the series. It goes without saying that you should be reading your favorite series legally – when it comes to Weekly Shonen Jump, there’s almost no reason not to do so when the VIZ Media service is so great – but I do appreciate that it is different for different magazines and different publishers. So even if you’re a big fan of a Kodansha series, it should still be your duty to shell out and buy either the digital or physical editions.

That being said, physical editions are undoubtedly the best way to support the series. Not only does the publisher and the creator get a cut, you’re also contributing to the sales figures and supporting your local retailer. For me personally, I always try and buy my manga at my local comic shop – not because I particularly like it, but because I don’t enjoy the idea of putting money in the pockets of one Mr. Bezos. Still, it’s up to you.

If you read your favorite canceled series in English, such as via the Shonen Jump app, then you may want to consider importing the Japanese volumes. Not only is this a little more unique, it may also come with several goodies that might not be available with the English release. Furthermore, although publishers have definitely gotten better as of late, there’s no guarantee that your favorite canceled series will get an English release – VIZ Media may have published Yui Kamio after its cancelation in Weekly Shonen Jump, but that’s just a drop in the ocean.

Luckily, importing manga volumes from Japan is easier than ever. There are many sites out there that do this – including Amazon Japan – but the one that I like to use the most is Honto. Its stock can be a little patchy at times, focusing more on e-books than it does physical volumes, but its competitive shipping rates and excellent customer service are what I value the most.

Mandarake is also a good shout if you’re looking to either buy in bulk or give preowned volumes a new home (don’t worry, Japanese people tend to take very good care of their books).

There is no doubt that the world of manga is a fast-moving place. Today’s hit is tomorrow’s old news, and people can forget very quickly about something that is no longer running. In this sense, it is up to you – the diehard fan – to keep the memory of a canceled series alive over the coming months, years, and decades as it threatens to disappear from history altogether.

This is slightly different from the earlier strategy of ‘raising a fuss’ as it speaks to the long-term legacy of a series once it has concluded in Weekly Shonen Jump, rather than the short-term reaction to its cancelation. But, in many ways, it comes back to all of the points raised: it is by raising a fuss that you can keep the conversation going, and it is by building up a physical collection that you can maintain a concrete representation of your time with the series. Both are really ways to keep the series’ memory alive into the future.

The importance of a physical collection, in particular, becomes quite obvious when looking at the recent example of Act-Age. While it was canceled in Weekly Shonen Jump for all of the right reasons, it is now in danger of passing completely out of existence as its digital releases have been removed from online storefronts, and its collected volumes will no longer be reprinted. As such, only those who either bypassed DRM or managed to get their hands on a physical volume will be able to experience the series – a set of circumstances that may mean the memory of Matsuya Tatsuki and Shiro Usazaki’s series may fade forever.

Throughout history, there have been many things lost to the annals of time. When Rome was sacked by the Gauls in 390 BC, we lost a lot of records of early Roman history and were forced to rely on later, contemporary accounts. Over twenty original books of the Bible are lost to time, mostly due to the early Christian church’s constant rewriting of the biblical canon. Even many films are considered lost, including a shocking amount of French filmmaker George Méliès’s pioneering work. Such facts speak to the fragility of life.

Still, you can counter this somewhat by building up a physical collection. Although things will still degrade over time, no one can take away books and the like from you. Of course, you can invest in merchandise as well, but chances are that if your favorite Weekly Shonen Jump series has been cancelled, it probably doesn’t have much of it.

My Stance on Collecting

That being said, I have a complicated relationship with collecting. On the one hand, it is undoubtedly the best way to support a series you love – cancelled or not – but it can, at the same time, often feel like accumulating stuff for the sake of it. Buy that book because it’s part of that series, buy that figure because it’s one of those characters – consumerism isn’t really a problem in and of itself, but boy can it take up a lot of space.

As a result, my stance on collecting is as follows: only buy stuff that has a concrete use, such as manga volumes and branded apparel. This means no figures, no artbooks (you won’t read them anyway), and no buying stuff for the sake of it – call it the ‘Anti-Collectors’ Collectors Club,’ if you will.

For example, some of the things I have been buying as of late include the Boogiepop novels; old Weekly Shonen Jump issues, and some of my favorite ongoing and canceled series. These include: Shimeji Simulation, SHY, Fire Punch, Mitama Security, and Agravity Boys. Hopefully, all of these things turn out more useful than a figure, which will just sit on a shelf in my room and collect dust.

Whatever your stance on collecting is, one thing is very clear: there is a way to survive Weekly Shonen Jump cancelation – you just have to find it.