So. Your favorite character died. Join the club.

Weekly Shonen Jump has killed off a bunch of iconic characters throughout its history, from Heart in 1983 to pretty much everyone in the latest chapters of Chainsaw Man. Much like cancellation, it’s part of the Jump life.

With that being said, is there a way to cope with it? Can characters killed in Weekly Shonen Jump come back? And how likely is it that you’ll still remember that brutal takedown in ten, twenty years? Welcome to the second installment of our Weekly Shonen Jump survival guide, this time taking on the topic of: character death.

As mentioned, Weekly Shonen Jump is no stranger to death. In much the same way that series are killed off, so too are characters – there is no better way to raise the stakes, after all.

Probably the first memorable character death in Weekly Shonen Jump history came in 1983. Before Fist of the North Star debuted, the majority of manga in the magazine were focused on comedy or sports, which was typical of the manga industry at the time. Nevertheless, Tetsuo Hara changed all of that when he drew influence from action stars such as Bruce Lee and Yusaku Matsuda, creating a series that revolutionized shonen manga forever.

Heart’s death comes in the first couple of chapters of Fist of the North Star, when Kenshiro is on his way to kill Shin. Despite being – in the grand scheme of things – quite an unimportant character, he has gone on to become very well-known on account of his iconic death cry: screaming “HIDEBU!!”, he has appeared many times in many different memes and formats. He even managed to take sixth place in a 2018 survey by Anime! Anime!, placing his last words next to the likes of Uchiha Itachi from Naruto and Okita Mitsuba from Gintama.

Still, I doubt anyone shed any tears after this character death, and its notoriety is due more to parody than anything else. So, how about something a little more emotional from the pages of Weekly Shonen Jump? For that, we have to look no further than JoJo’s Bizarre Adventure – launching in 1987, Hirohiko Araki’s long-running series is chock full of them.

The obvious choice would be Caesar Zeppeli, whose last words also took eight place in that aforementioned Anime! Anime! survey. There’s also several from Stardust Crusaders, such as Avdol and Iggy. 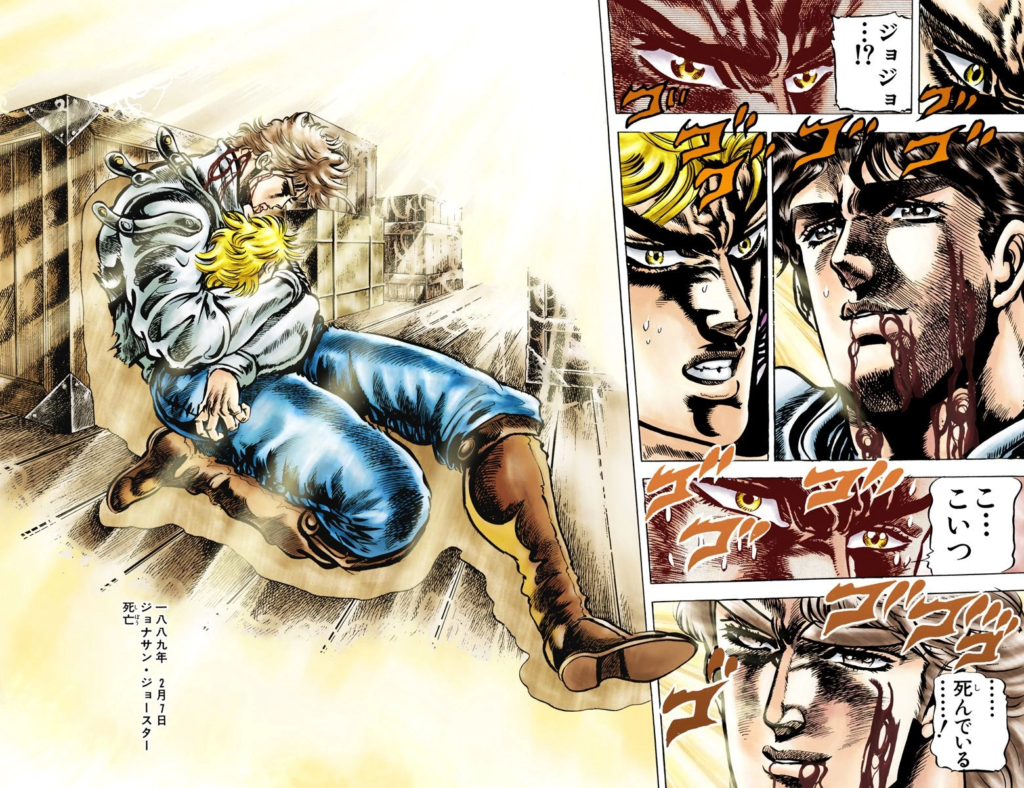 But I want to pick something a little different: when Jonathon Joestar died at the end of Phantom Blood, Japanese fans had no idea that this was just the end of ‘Part 1’ – the series had just started, and there was no precedent for this. With this in mind, I’d say that killing off your protagonist is pretty ballsy, and deserves to be recognized in the Weekly Shonen Jump character death hall of fame.

How about something more modern? There are a couple of good examples, once more present in that Anime! Anime! survey: Portgas D. Ace from One Piece, Uchiha Itachi from Naruto, and Okita Mitsuba from Gintama. But I want to pick something a little more leftfield: Koro-sensei from Assassination Classroom, whose death was arguably the best thing about the series.

The funny thing is, Koro-sensei’s death was always pre-determined from the beginning, as the students of Class 1-A had to kill him before the end of the year lest he destroy the earth. The clue’s in the title.

Yet, I doubt anyone actually thought that Yuusei Matsui was actually going to follow through on it: there was always the possibility that he’d find some way out of it, some way to preserve this character to whom we’d all grown so attached over the course of the story.

The fact that Assassination Classroom stuck to its gun and delivered this very memorable character death is part of the reason why I’d consider it one of the best series to run in Weekly Shonen Jump in the 2010s. Other series could stand to learn from this: mangaka have an unfortunate tendency to try and resurrect beloved characters, regardless of its impact on the story.

Can Jump Characters Come Back?

Killing off a character is always a double-edged sword. On the one hand, it immediately ups the stakes and gets us invested in a narrative arc, or fearful of an antagonist. However, it also deprives a story of a potentially popular character, negatively affecting its reception as a result.

The urban legend is that character popularity polls are carried out in order to inform the author (and the editors) who they should and should not kill, as well as feature more in the story. Who knows if that’s actually true. What I do know, however, is that whenever authors try to bring popular characters back, it often doesn’t end well.

Although it must be said that many of the most impactful character deaths such as Itachi and Jiraiya were not reversed in Naruto, I do remember Kakashi’s revival being a particularly grinding occurrence. In the first place, having an ability that can bring people back to life is a bad idea, and its usage on Kakashi was pretty pointless. 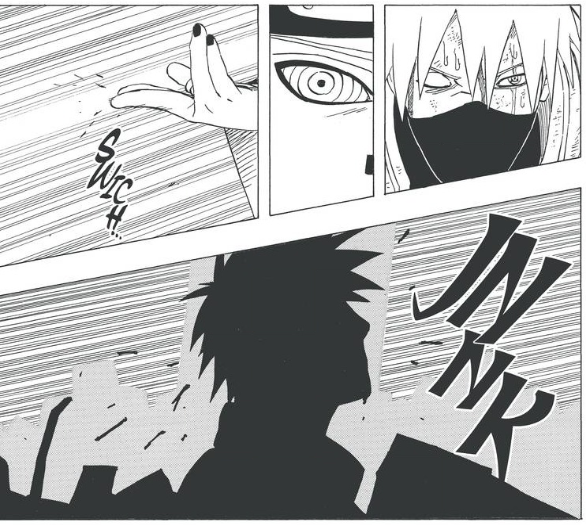 Wouldn’t it have been good to build up Pain even more? And what was his role in the story after this point, anyway? Wouldn’t it have been good to pass the torch a little bit more neatly? In reality, this was a sign of the long-term decline of Masashi Kishimoto’s writing, starting after the assault on the Hidden Leaf Village and lasting up to the present day. But that is a topic for another time.

Another good example that is, admittedly, dogged by circumstance is Kite in Hunter x Hunter. The death of Gon’s mentor and Ging’s friend is undoubtedly one of the reasons why the Chimera Ant arc is so beloved, and leads into some of Togashi’s best writing. But Kite was brought back to life at the end of this arc for seemingly no reason, albeit in a different form.

In this case, we do have to give the benefit of the doubt, as there are many plot threads that have been left hanging by Hunter x Hunter’s ongoing hiatus, such as the role of Gyro. But it is worth pointing out that Togashi committed a similar blunder not long after when it came to Gon and Nanika: her wish-granting ability felt a little too convenient for many people, including myself. So that doubt may be misplaced.

How to Cope With Character Death

Regardless, it is clear that even if your favorite Weekly Shonen Jump character is brought back from the dead, it might not be so satisfying. So it is much better to pursue more effective measures for dealing with grief – chief among which, fan works.

The great thing about the internet is that anyone, anywhere – as long as they have a computer and an internet connection – can connect with others who are like them and engage in creative endeavors. That is where sites such as Archive of Our Own come from.

Fanfiction is undoubtedly one of the best ways to keep your favorite character alive, if only in your imagination. It allows you to continue interacting with them and, if so inclined, step into their shoes entirely. And even if you’re not very good at writing (trust me, no one is at first), there is a whole universe of fan works out there to discover, located under various tabs and in various tags.

That’s not the only way to deal with character death, however. Given that Weekly Shonen Jump is a manga magazine, it stands to reason that a large portion of its fan works would also be published as comics – in other words, doujinshi.

Literally meaning ‘self published works,’ doujinshi doesn’t necessarily mean the type of books you’re thinking of. You know the ones. Take a walk around Comiket when Japan is open again and you will find that a majority of the books on the floor aren’t about boobs and ass: some of my most prized collection is just about two characters interacting. 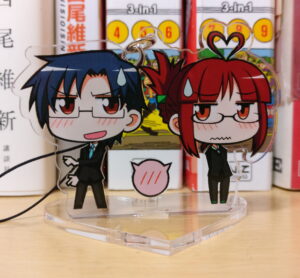 Probably my favorite doujinshi is the one that came with the keychain pictured on the right, consisting of a selection of stories between the [email protected] player character and one of the idols, Akizuki Ritsuko. While neither Ritsuko nor the Producer are dead in the story (it isn’t that type of series), it does provide the same type of warm fuzzy feeling you get when connecting with your favorite characters, or seeing your favorite pairing.

Furthermore, if it’s specifically dead Jump characters that you want, then I have to talk a little bit about Chainsaw Man. I’ve been obsessed with the character of Reze ever since she first appeared – unfortunately, she died not long after, so I’ve been quietly cultivating a Twitter timeline of Reze-focused fan artists for the past year now. Probably my favorite is Kogure, whose fan comics are just as funny as they are heartwarming.

The only downside is that, in order to interact with a large number of these doujinshi and fan works, you will need to understand Japanese. Still, there are translations available, and most of the fanfiction on AO3 is available in many different languages. I’m sure you can figure something out.

(Character) Death is a Part of Life and Weekly Shonen Jump

By now, it should be obvious that the way to cope with Weekly Shonen Jump character death is not to flame the author on Twitter, nor drown your sorrows in beer and wine. That doesn’t help anyone. Instead, consider taking one of these steps in order to deal with the phenomena better – Lord knows you’ll need it, because death is just as much a part of Weekly Shonen Jump as it is in the real world.

Who knows if you’ll remember the heartbreak and outrage you felt at your favorite Jump character dying in ten, twenty years? A lot can happen in then. You might not even like manga at the end of it, which is probably a strange thought. Who knows, you might even have kids!

Have a nice life!

You can read Weekly Shonen Jump via VIZ Media.