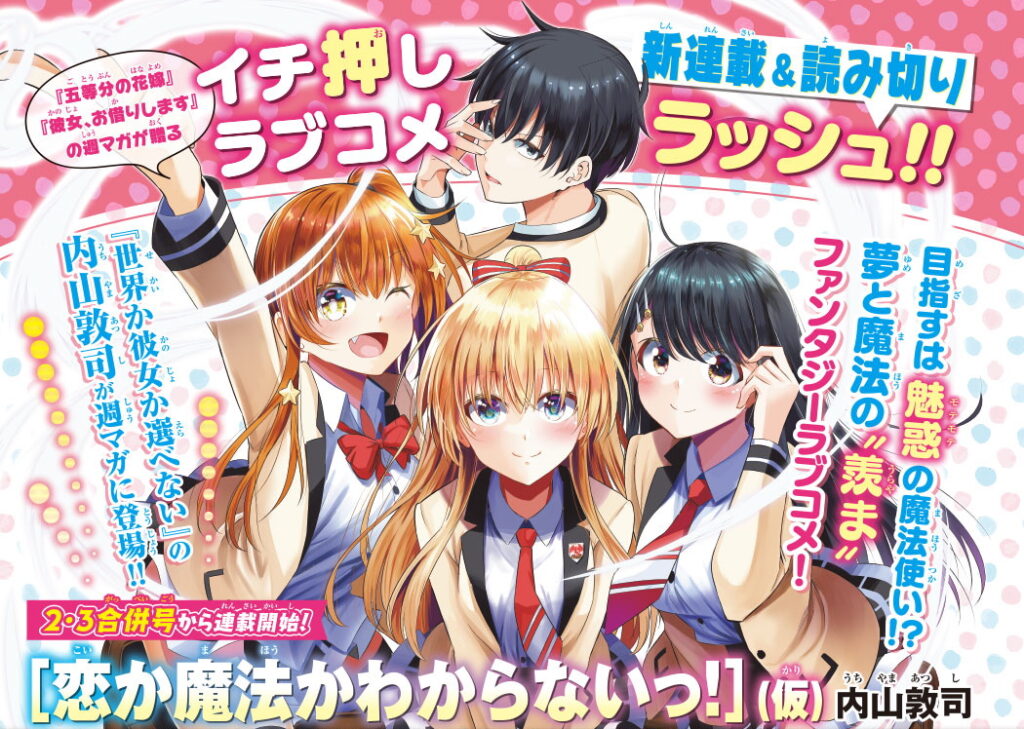 It’s no secret that Weekly Shonen Magazine has been having a ball with its latest set of love comedies. The Cuckoo’s Fiancee by Miki Yoshikawa has become one of this year’s viral hits, breaking several publishing records over at Kodansha; and Hiroyuki’s Kanojo mo Kanojo got the fastest anime adaptation ever in the magazine’s history. Clearly, something is going right.

Good business sense dictates, however, that you don’t quit while you’re ahead. Rather, you double down by pressing your advantage in search of yet more success. In this sense, perhaps it is no surprise that Weekly Shonen Magazine is preparing a rush of new love comedies to debut over the next couple of issues. 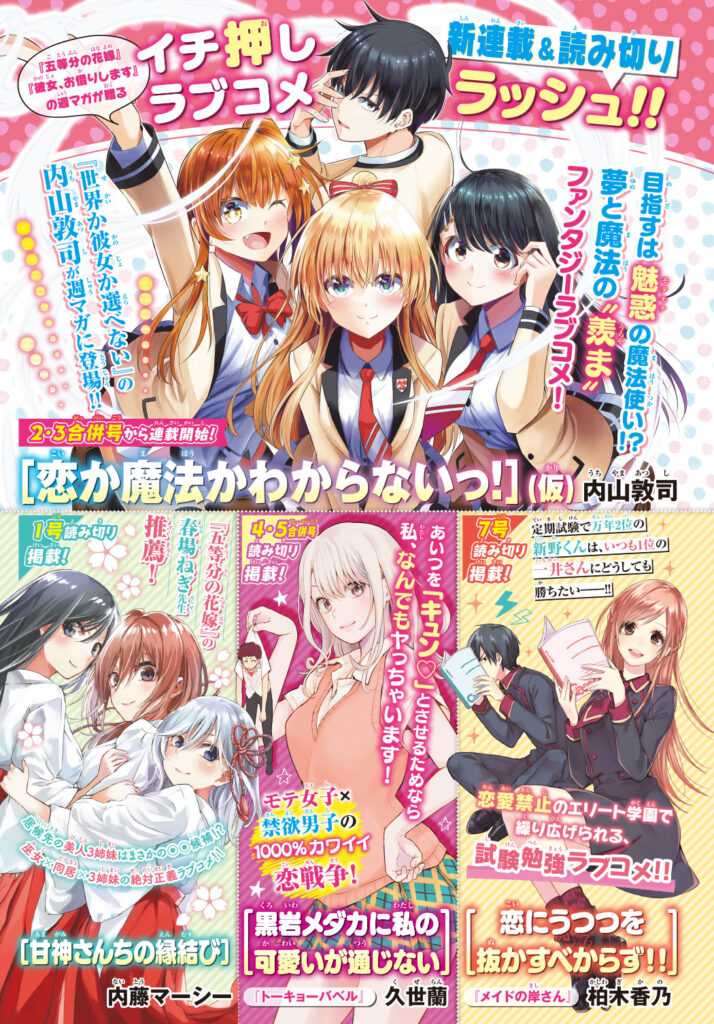 Only one of these will constitute a proper serialization. Penned by Sekai ka Kanojo ka Erabenai (Will It Be the World or Her?) author Atsushi Uchiyama, Koi ka Mahou ka Wakaranai! (I Can’t Tell If It’s Love or Magic!) will join the likes of Cuckoo’s Fiancee and Kanojo mo Kanojo as a regular series from Magazine combined issue two and three onwards. The other three series are one-shots, but this doesn’t mean that they’re not worth checking out.

Next week’s issue no. 1 (on sale 2 December), for example, will carry Marcey Naitou’s latest one-shot Amagami-san chi no Enmusubi (lit. Marriage Ties of a Sweet God’s House). Naitou is a new author who has done some great Chainsaw Man fanart.

The same goes for issues no. 7 and the combined issue four and five: Maid no Kishi-san creator Kano Kashiwagi is having their Koi ni Utsutsu wo Nukasubekarazu!! (I Must Not Get Hooked on Love!!) one-shot published in the former, while the Tokyo Babel artist Ran Kuze is getting a second chance (after recently suffering cancelation) with their Kuroiwa Medaka ni Watashi no Kawaii ga Tsuujinai (My Cuteness Isn’t Getting Through to Medaka Kuroiwa) in the latter. It’s very possible that some of these one-shots will be turned into full Magazine series in the future.

Either way, Kodansha’s aim in preparing this boatload of love comedies is clear: if such series are proving popular in Weekly Shonen Magazine, then why not publish more? Considering the popularity of The Cuckoo’s Fiancee, you can hardly blame them. One does hope, however, that such a reactive approach does not backfire. Variety is key!