Weekly Shonen Magazine has been in circulation since 1959 and shows no signs of stopping. The magazine was the most popular during its early years, until Shonen Jump came around in 1968. While Weekly Shonen never regained the top spot from Shonen Jump, it still remains one of the main sources of shonen manga for an older demographic.

The magazine has been described as the “naughty older brother” by rival magazine, Weekly Shonen Champion. This perfectly describes the collection of manga the magazine has published over the past 6 decades. The magazine has introduced readers to racy elements that range from questionable fanservice to insane amounts of violence over the years.

All of these elements could be seen depending on what volume of the magazine you pick up. Many of the covers feature gravure models in order to reel in an older male audience, and others have the characters featured in the magazine that week. This makes it less accessible compared to Shonen Jump, which caters to an all-ages demographic. 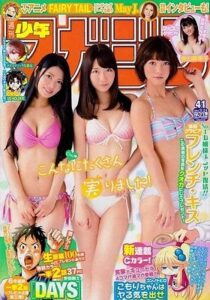 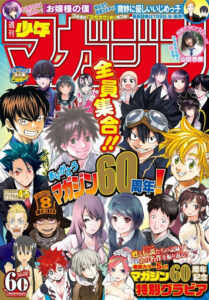 As a magazine that’s been in circulation for the past 60 years, it’s easy to see why. The magazine is home to many notable series throughout the generations. This first series we’re going to mention is a well-known series that fans have heard of at least once.

The magazine is most known for its serialization of the iconic series, Hajime no Ippo. The series began in 1989 and continues to this day with 128 volumes under its belt. The manga tells the story of Makunouchi Ippo and his journey to becoming the boxing world champion.

Oddly enough, fans of the series must buy the print edition of the magazine in order to follow Ippo’s journey. This manga is not available in the digital release of the magazine, as per the wishes of the author, George Morikawa. The reasons for this are still unknown.

One of the first manga published to this magazine in 1968 is the boxing series, Ashita no Joe.  The manga follows Joe Yabuki, an ex-con who became a professional boxer after getting out of jail. The manga documents Joe’s struggle to get to the top of the boxing industry, and the series’ divisive end still sparks intense debates amongst fans. Ashita no Joe inspired the 2018 series Megalo Box that was a series created to celebrate Joe’s 50th anniversary.

Yuya Aoki and Rando Ayamine’s Get Backers was published from 1999-2007. The series follows Ginji Amano and Ban Mido, two super-powered repo men who go around the shady parts of Shinjuku to retrieve items for people ranging from cats to atomic bomb parts. The series is packed with great action fueled by Ginji’s thunder abilities and Ban’s illusion abilities, but it also provides plenty of fanservice that is perfectly in tune with the magazine’s image.

The most popular series in the magazine right now is Atsushi Okubo’s Fire Force.

The series follows Shinra Kusakabe, a boy who is a third generation pyrokinetic who produces flames from his feet. When he was younger, his mother was killed in a fire and his brother is also presumed dead. Shinra joins Special Fire Force Company 8 to find out the truth about what happened that night and fights off corruption in the Fire Force as well. The anime was recently renewed for a second season.

The series was popular for the tragic story, the focus on Syaoran, and the revisiting of old CLAMP characters, but it was unpopular for its confusing plot twists that required multiple boards with red strings connecting the dots in order to understand what happened.

Yasuda Tsuyoshi’s Days is a soccer manga that follows Tsukushi Tsukamoto, a very clumsy boy who doesn’t play soccer well, but ends up joining his school’s prestigious soccer team and somehow manages to make it on the team. Tsukushi may not be talented, but he is extremely hardworking and always inspires his teammates to do their best through his determination.

The series is a heartwarming one as readers see Tsukishi’s struggle to become a decent player, and it leaves readers rooting for him.

Smile Down the Runway

Kotoba Inoya’s Smile Down the Runway isn’t a typical shonen anime; it’s about fashion. The series follows an aspiring fashion designer, Ikuto Tsumura and an aspiring model, Chiyuki Fujito as they try to break into the fashion world through their respective fields. The drama and the tension between the characters keeps readers waiting for the next chapter week after week.