Popular street fashion brand WEGO has announced that they have teamed up with legendary video game company KONAMI to design a line of clothing based off one of their most worldwide popular arcade games, Dance Dance Revolution. The goods, including shirts, socks, a bag, and a few other items, will be available online and at physical WEGO stores from next month on August 29th. 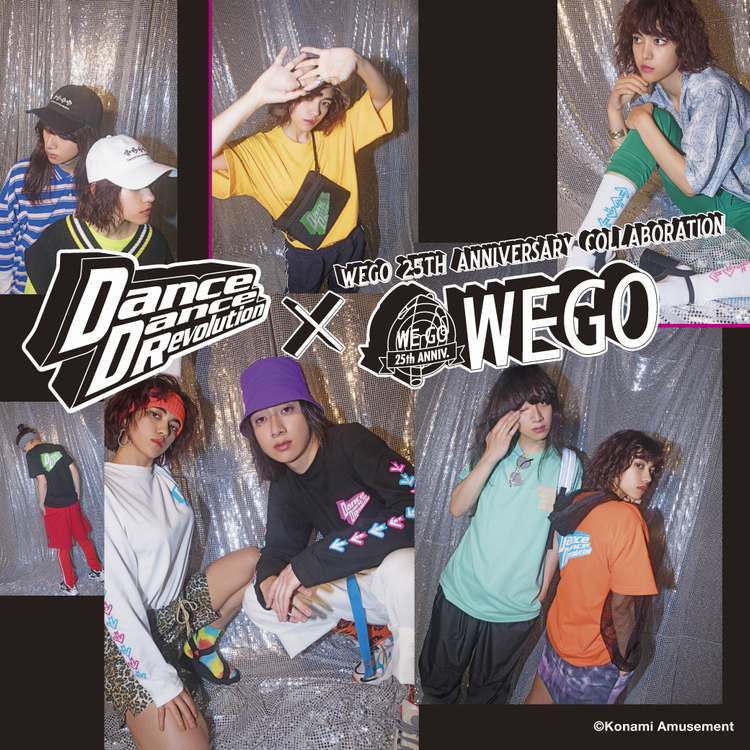 This collab comes as part of WEGO’s 25th anniversary promotion, an utterly powerful way to win the hearts of people who may not have heard about the exclusively Japanese clothing brand. I feel like the designs are exactly something a Dance Dance Revolution fan would want to wear. The shirts have the iconic blue and pink arrows going down the sleeves, almost simulating the stress of trying not to miss any notes and break your full combo. The t-shirts have the DDR logo printed on the back, and the shirt is available in a few different color pallets that really do the game’s aesthetic justice. The full collaboration line consists of all unisex goods, which consist of t-shirts in 3 colorways, long sleeve shirts in 2 colorways, a sidebag with the DDR logo printed on it, an embroidered “dad hat” with the DDR arrows on it, and high socks with blue arrows on one sock and pink arrows on the other.

I gotta say, for a rhythm game that has such an iconic, solid track selection, the music in the trailer uploaded by WEGO caught me pretty off guard. It’s sort of jarring, but also hilarious because it tells the tale of two brands you wouldn’t expect to work together coming together to create something for the community. It’s like the fashion student and the IT nerd working together to make a cool shirt.

Dance Dance Revolution was first released in 1998, and has stayed pretty consistently popular in Japan, while its seen different eras of popularity surges in the USA. There are, however, a ton of diehard American DDR fans. We’ve seen a lot of rhythm games come and then disappear entirely from arcades (you won’t be missed, BeatStream), but Dance Dance Revolution still sees massive updates and frequent new, exclusive tracks.