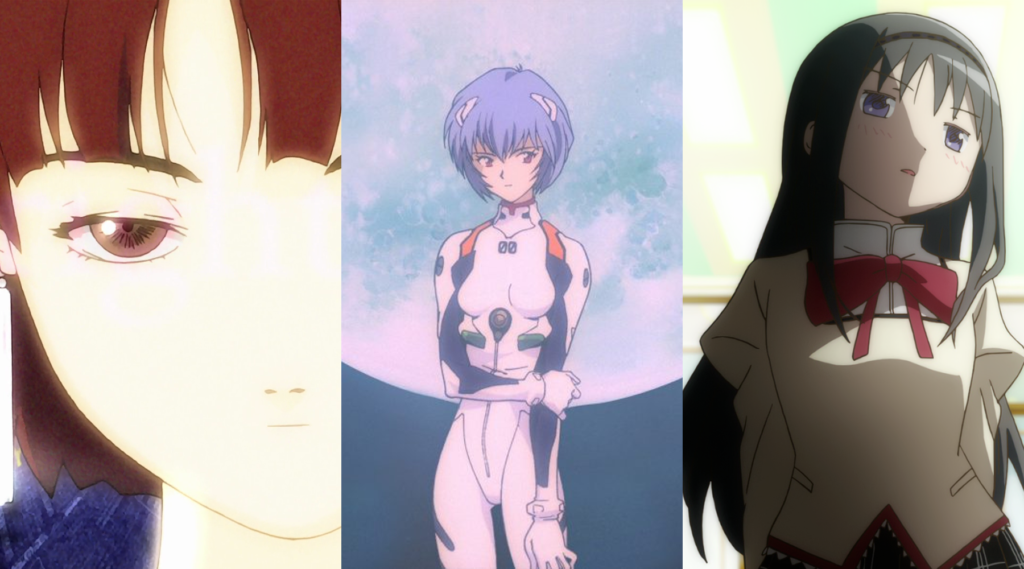 To clarify straight away: we’re not talking about explicit adult material with the phrase after midnight anime. We’re actually referring to a category of cartoons ambitious in tone and direction that will tickle in your brain something fierce, and are perhaps best enjoyed in an insomniac-fugue state in the early morning hours.

Shows like Neon Genesis Evangelion, Puella Magi Madoka Magica, and Serial Experiments Lain, or anything else written by Lovecraftian devotee Chiaki J. Konaka, that have haunted their audiences for decades.

Incidentally, we’ve opted not to add those titles to the list, as we imagine most of you have seen them (if not, what are you waiting for?). Instead, we want to point you towards other brain-bending, soul-crushing experiences in no particular order.

1. His and Her Circumstances

One reason we didn’t include Evangelion here is so we could point people towards Anno’s massively under-appreciated post-Eva Shojo classic. While our man’s devoting himself to tokusatsu forever now, would you believe his take on high school anime romance gets similar Evangelion-introspective territory real quick?

Great for after midnight solitude, but it caused so much tension between him and His and Her Circumstance’s original author that his right-hand man Kazuya Tsurumaki had to take over the project for the last chunk of episodes.

Resident OTAQUEST work-horse Jacob called Welcome To The NHK! ‘a sort of existential crisis’ for some, so don’t say we didn’t warn you. Welcome To The NHK! gleefully forces otaku of all stripes to confront some of the less-than-savory aspects of the sub-culture as the show portrays the attempted rehabilitation of a hikkikomori shut-down via a high school girl who shows up at his door. Fans still love it precisely because they can identify with that particular struggle.

Watch it on Funimation.

Opting to add just one film to this After Midnight Anime list, we knew we had to go with one from Oshii. His most recent anime film, 2008’s The Sky Crawlers, could be called his second most underappreciated behind MAROKO. It revolves around eternally young fighter pilots, forced to fight in a meaningless war for sport. Lots of dry Oshii philosophizing coupled with an all-star cast including both Rinko Kikuchi and Chiaki Kuriyama, The Sky Crawlers makes for great late-night meditation.

Available for rent or purchase on various digital storefronts.

Sure, there’s tons of slaughter and nudity (the most ‘adult’ title here), but this anime about dead people who have to exterminate aliens leaves you with a bevvy of moral and philosophical questions to ponder.

Same early 2000s appreciator Carley called Now and Then, Here and There an early isekai, much to my dismay. Instead of being wish fulfillment romp in delightful fantasy worlds, this show takes a very real look at what would happen if a young’n from Earth got caught up in a series of battles in an unknown land.

We can think of some anime that feature former child-soldiers, but here’s the only one we know that actively tackles the cold and harsh reality of child soldier phenomena.

You can purchase it on some digital storefronts.

Surprised we have at least one anime from this decade on our list? We’re still not over this series, partially because we have to wait a few months for a special grand finale special.

From its very first chapter, Wonder Egg Priority threw caution to the end and dived head-first into a bevy of taboo subjects. The way the show honestly portrays harsh realities like gender disparities or even self-harm makes it ideal for a more intimate viewing experience.

As happy as we were to see Boogiepop & Others in 2019, the turn of the Millenium take on the Boogiepop still makes for the more eerie and disconcerting experience. An original sequel to the first light novel, though not requiring you to read it before watching Boogiepop Phantom, it throws viewers into a non-linear series of events including, but not limited to, a string of murders, unexplainable pillars of light, and someone called ‘The Fire Witch’.

Haibane Renmei never gets too intense… on the surface. You might mistake it for a slice-of-life anime, if the first episode didn’t feature angel wings bursting through the flesh of a girl’s back. This project, helmed by Yoshitoshi ABe, is about troubled girls in an unknown setting. It doesn’t give you all its answers, but the more you begin to ponder about the lives of the Haibane, you start to arrive at some uncomfortable conclusions.

Watch it on Funimation.

9. The Flowers of Evil

So many wrote off The Flowers Of Evil animation, because 2013 anime fans couldn’t handle the fact that the rotoscoped animation made Kasuga and Nakamura look like people instead of anime characters. This uncomfortable animation style served the show perfectly, however, fully heightening the small-town claustrophobia eating away at the above two. Who knew that turning the cut-throat manga about a secret sadist catching the residential bookworm stealing the class princess’s gym clothes into an atmospheric and droning slow burn was the best thing that could ever happen to it?

Catch it on Crunchyroll.