Comiket is the largest doujin event in Japan, with the bi-annual event still going strong after 45 years. The event brings fans of anime and manga and otaku culture from all around Japan (and many people from abroad) down to Tokyo Big Sight for 4 days of wandering the cramped marketplace halls of the event in the hope of finding your favorite fan artist or subculture expert to buy their latest creations.

Maybe they create music, maybe they draw manga based on popular properties or even their own, maybe they make games. Maybe they just have a very specific niche that they love and want to share, like keyboards or telephone wires. Whatever it is, there’s probably at least one seller there with something family-friendly or not-safe-for-work that fits your interest. Beyond fans, corporations also attend, and together Comiket has become the largest fan convention in the world.

COVID-19 has, like everything else, scuppered the event in 2020. That’s where Comic VKet comes in. While not organized by the Comiket team, the purpose of the event is similar: bringing fan creators together to showcase their works. Comic Vket is, in essence, taking Comiket online and making it a virtual event, allowing people to attend without fearing social distancing and in the comfort of their own home. A bonus from the shift to a virtual event? No cramped hallways, 24/7 opening hours, and the ability to visit from anywhere in the world. For this event, anyone can come and buy doujinshi in an online, social, safe environment.

Comic VKet is actually 2 events: one which hosts illustrators and manga artists set in a virtual Akihabara, and Music VKet, set across 5 virtual halls that host doujin musicians. To access the event, you need to enter the virtual world, using either VRChat, Cluster or Styly, opening the event on either a phone, PC or Mac depending on the software used to enter the events themselves.

The experience, in turn, differs based on which app you use. VRChat is the most popular app to use and therefore has the most people to experience the event with (you can see others as you wander the event), but it requires a Windows PC to function even if VR isn’t a requirement. Access of Cluster or Styly can be done from anywhere from a phone to a web browser to a dedicated PC application, but are mostly Japan-only VR applications. Styly offers a separate AR mode that allows you to put the event up in the world around you, though I was never able to make this work.

Explaining this event can only get you so far. How about we take a tour? Welcome to the inaugural Comic VKet! 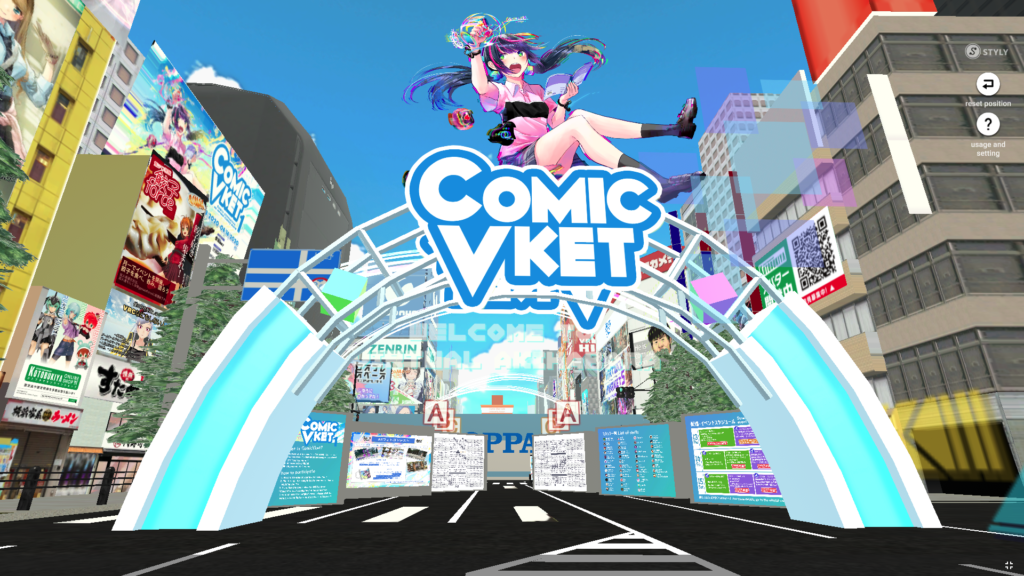 Comic VKet is the bigger of the two concurrent events, taking the doujin comic booths of Comiket and placing them into the virtual streets of a recreated Akihabara. Familiar shops can be seen all around you, even if some have had creative name changes to avoid any copyright or trademark issues. Animate becomes Anineat, for example. Some companies have partnered with the event though, such as Maidreamin and Kotobukiya, while adverts for sponsors from places like the Akihabara Tourism Board to Western light novel publisher Kaiden Books can be found all over the buildings.

In place of cars, the streets of Comic VKet are littered with booths for doujin artists. 427 of them, in fact. Upon entering the virtual Akihabara you’re greeted with a large arch welcoming you to ComicVket, and even without a VR headset and despite the simplistic nature of how Akiba has been rebuilt, it’s hard not to be impressed by the event’s layout. 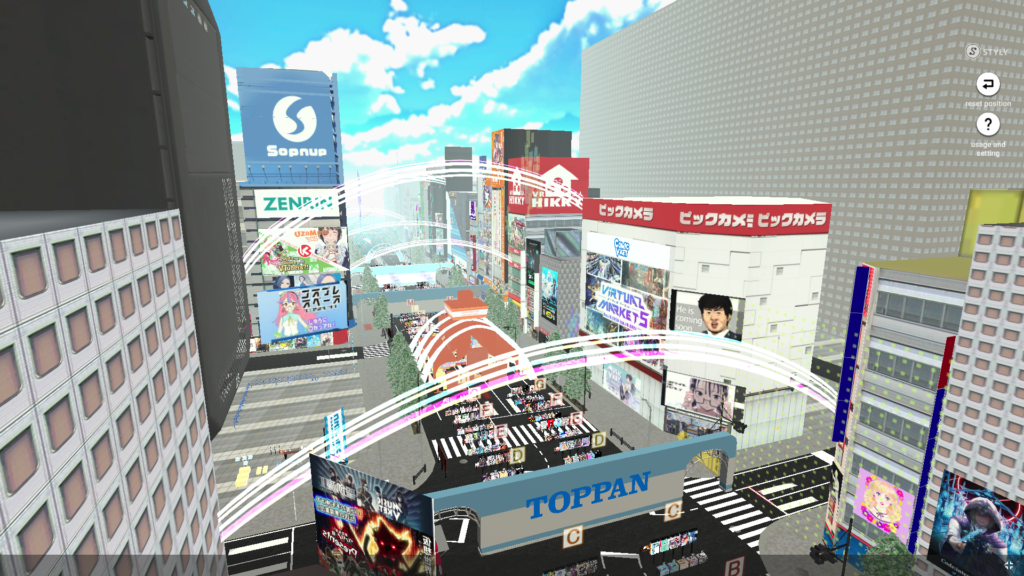 There, just as if you were in the real place, is Akihabara, and you have free rein to wander down the main street and gawk at all the fan works. There are even some small side streets that despite not featuring any booths are nice places to wander down that also remain accurate to the real thing.

I accessed Comic VKet through Styly, which has a flaw compared to the other applications where visiting these locations is a purely single-player experience. You won’t see other players wandering around the world with you, and the ‘cosplay area’ clearly designed for people with complex and highly personalized avatars to stand and pose with others is empty and bare. Still, you can experience the booths themselves, and these are the main reason why we’re here. 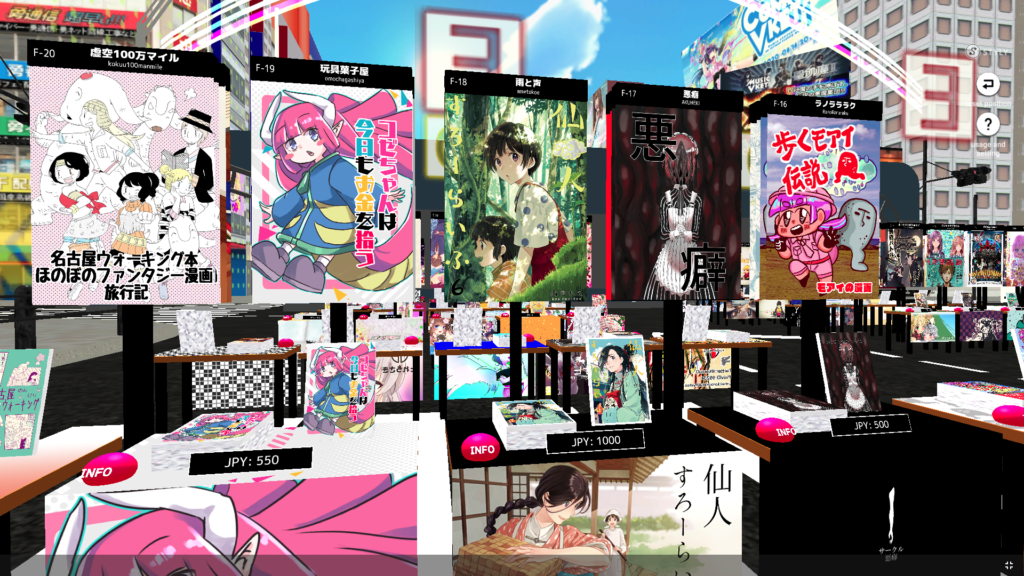 The booths are set up in rows of 10, with the main book they’re selling on display on a desk in front of a banner representing their booth. You can click on the books at the booth to open them and view a small preview, while links to buy the books are clickable at each of the booths. Some items are completely free of charge, and some have a fee. Most will take you to a purchase page for a digital eBook, but some purchases allow you to order and have physical items shipped to your door. One particular example of this is a keyboard doujin I spotted which shipped a keyboard kit to you alongside your purchase.

It’s clear when looking at online videos that the intended access software is through VR and via VChat. Online promotional videos of the event show people picking up the physical books from the stands while having other people there also allows booth operators to be in the same Comic VKet instance as you are, and that’s not possible in the app I used. From there, you would be able to strike a conversation and talk about the work with the creator, somewhat recreating the experience of asking someone about their booth at a place like Comiket. 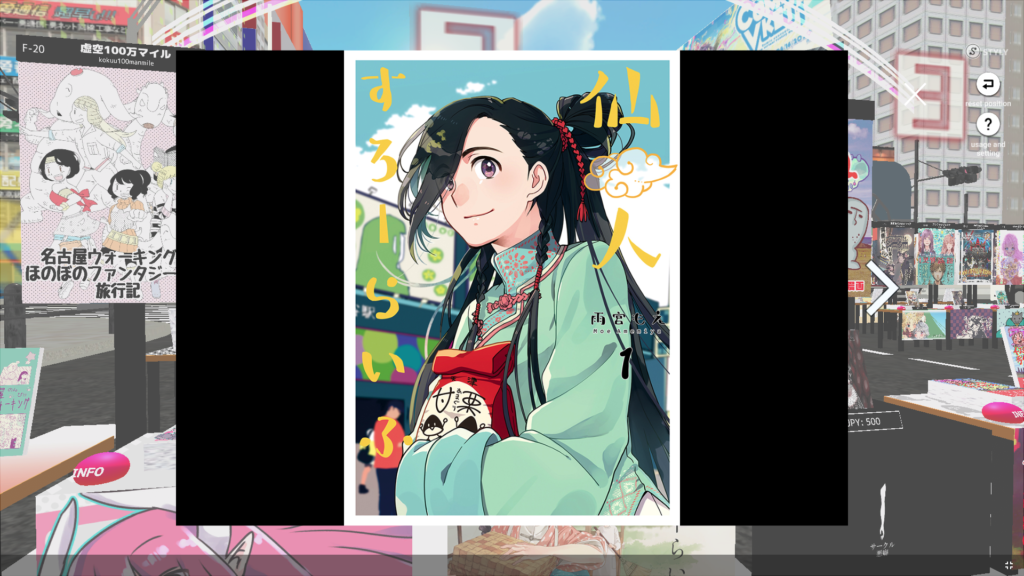 Still, I never felt limited wandering around in a solitary experience through Styly. I still got to see all the booths, preview the books that interested me, and I even purchased a few doujins that caught my eye.

Situated at the center of the event was the Comic VKet cafe which perhaps most suffered from being a solo experience. This space is designed as a communal meeting area, and there’s also a stall where you can buy official Comic VKet merchandise like shirts and phone cases. Both this and the cosplay areas are lost from playing this way. 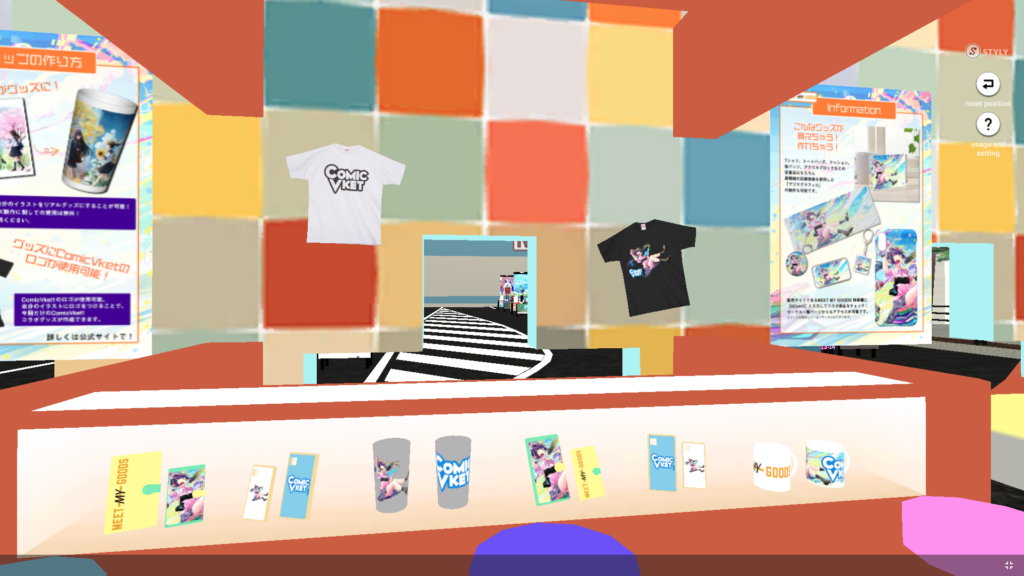 Still, if you enjoy fan works, this is a great way to dive into a virtual event that recreates the fan convention experience. Artists big and small line these booths and it’s worth seeing if you can find an under-appreciated diamond in the rough, or a new artist you didn’t know existed before logging in. If anything else, you can have a bit of a chuckle at the Carls Jr. booth, with a free download of the menu on offer if you visit. 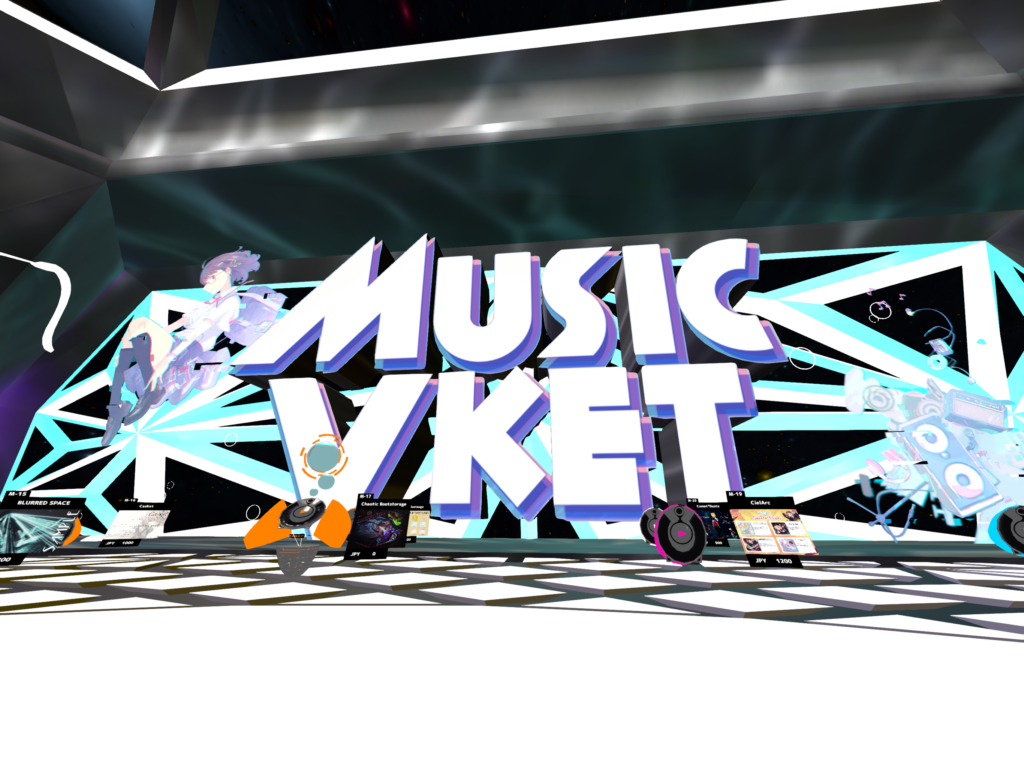 Music VKet is running concurrently to Comic VKet, with the focus being on doujin musicians and VTubers. I accessed this event through Cluster on an iPad, which allowed me not only to experience the event with others but allowed me to see and speak to some of the booth operators who were standing alongside their work.

Music VKet is set across 5 virtual halls with rough 30 artists in each hall. The booths are set up to showcase the cover art of their single or album first and foremost, while a music module stands floating alongside it. Pressing these modules plays a sample of the music so you can hear what it sounds like, and as with Comic VKet, you can then purchase any music you like.

I have to be honest, though I liked how this being a communal area allowed you to see what other people were listening to and even allowed you to talk to other people visiting the event through text or voice chats, I think this is an event best-experienced solo. This is mostly a design issue which I would hope could be fixed for future events, but clicking play on a sample of music leaves that music playing for anyone within the radius of the module. Some booths slightly overlap, meaning if both samples are playing they blend awkwardly.

Again, artists big and small showcasing a variety of genres were in attendance for Music VKet. I was glad to see MOOSIC.WAV had a booth at Comic VKet and I purchased some stuff there, and I downloaded a few free songs and paid for some others.

The corporate sponsorships here are much better integrated into Music VKet. Each of the 5 halls is 2 floors, and the 2nd floor is dedicated to one of the event’s 5 corporate sponsors. With a huge space to themselves, these areas can be set up to look like a real corporate booth. The Tower Records area had a large screen playing music videos for a few select idol groups and artists they were showing off. One of the corporate sponsors was Square Enix for NieR Automata, where a concert performance was joined by the sale of official avatars of 2B, 9S and Emil. In saying that, 5000yen and 10000yen for a character model feels a little steep.

It’s impossible to match the experience of a real event through a virtual convention, so the decision made by Comic VKet and Music VKet is to create a new, unique experience that takes advantage of virtual social environments to offer a new kind of experience unlike what you can get from a physical event. Augmenting the space around you to take the experience anywhere and creating impossible environments, Comic VKet and Music VKet are virtual experiences all their own, well worth visiting to check out the talented works of the exhibitors in attendance.

You can access these events in one of three ways. VRChat can be downloaded for free via Steam on Windows PCs and this application allows users to access both Comic and Music VKet for free. You can access the single-player-only experience of Styly on iOS, Android or PC via dedicated apps, and on PC or Mac via your web browser. Comic VKet is currently unavailable through Cluster but you can access Music VKet through the Cluster application on iOS, Android or Windows.

I’d love to see events like this sit in parallel to events like Comiket when it is safe for them to resume, but in the meantime, let’s enjoy these virtual conventions safely from home together!