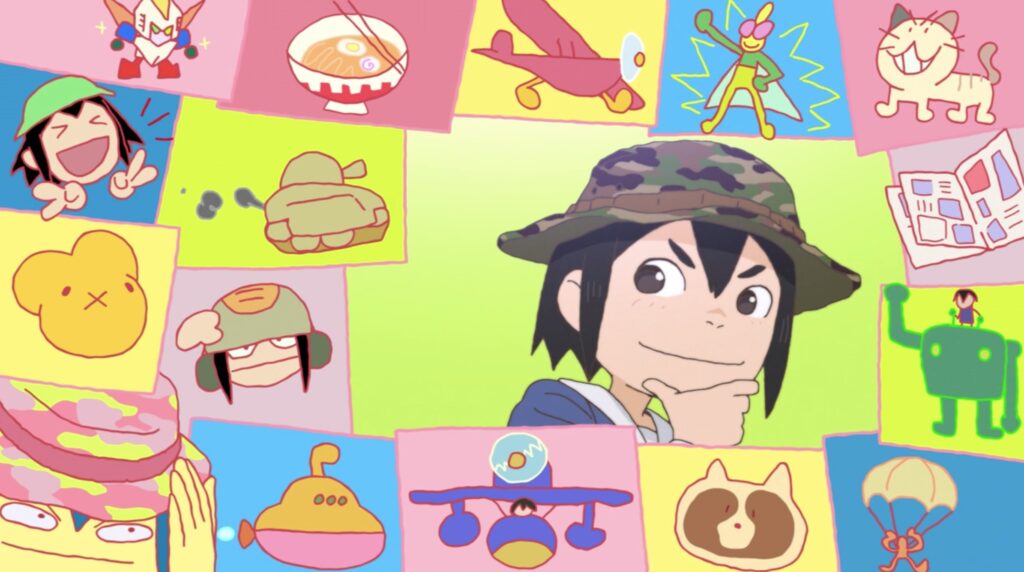 When Science Saru announced an anime adaptation of Sumito Owara’s manga Keep Your Hands Off Eizouken! in 2019, I frankly didn’t know what to expect. It didn’t have a prior English release, and all I knew about it was that it was directed by visionary director Masaaki Yuasa and that it follows three high school girls trying to make an anime.

Comparisons to Shirobako and Otaku no Video popped into my mind, and in a way, Eizouken honors the tradition and spirit of those works. It taught us the incredible importance of our imagination and creativity and the many possibilities of things we can create by using them. By putting time and effort, you can create astounding pieces of art in collaboration with others.

While Eizouken explores into the nitty gritty of the anime production process, it’s also an anime with a lot of heart, running its own creative engine during spectacular animated scenes from the minds of our lead characters. So let’s get into what makes this anime great and what it spotlights on the matter of creativity. 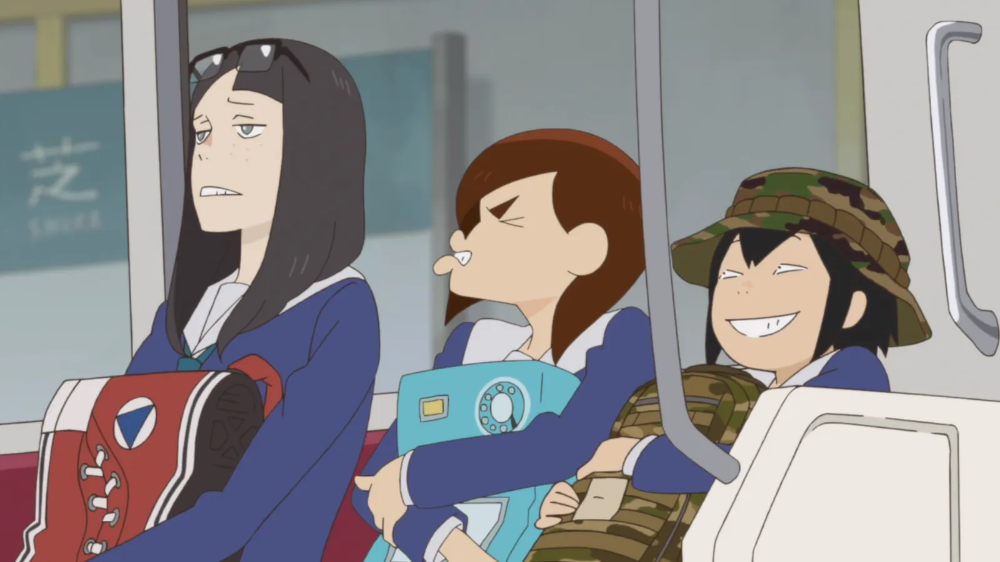 Teamwork is an essential skill if you’re going to produce an anime. Eizouken introduces us to three first-year high school girls. First is Midori Asakusa, who always has her head in the clouds and is constantly drawing designs and concepts in her sketchbook for a future anime. Next is her closest (and only) friend Sayaka Kanamori: a sharp-tongued classmate whose realist approach to life helps her become a financial expert and tactful negotiator. Lastly, we have the school idol and amateur model Tsubame Mizusaki, who dreams of being an animator instead of an actress, like her rich parents want her to become.

Together, they decide to form a film club at school to produce their own anime. You’d think grouping these three distinct, but entirely different personalities would result in conflict, but they get along pretty well and are motivated by one goal: to create an anime. Their diverse perspectives help them relate to each other, especially when it comes to brainstorming different ideas.

While Sayaka, the team’s producer, isn’t entirely interested in anime or Midori’s daily musings, she serves an important neutral figure role that keeps both Midori and Tsubama in check. All three of them have great chemistry that helps them move forward to the next stage of their project.

Making Great Art Is a Process 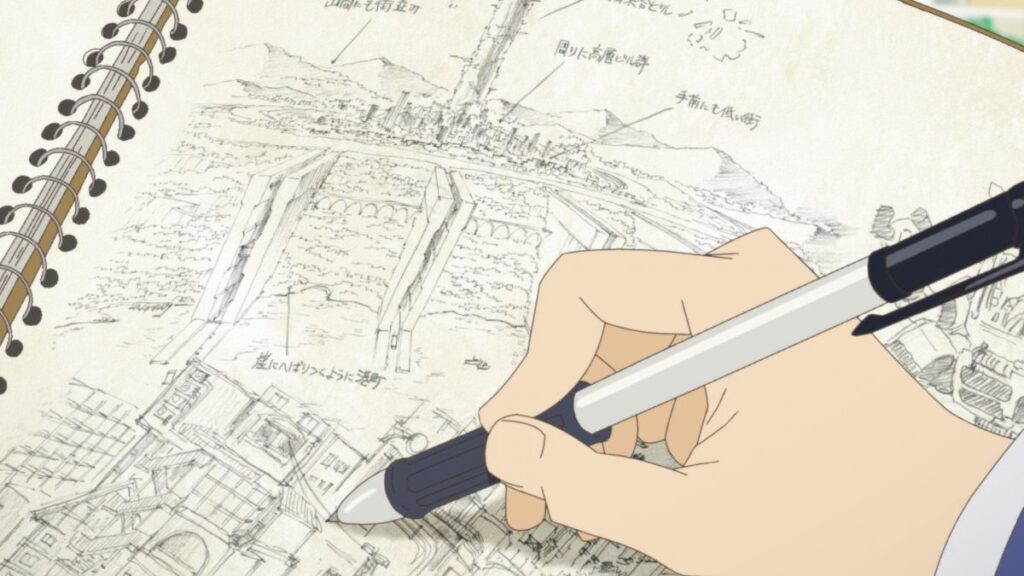 At times, Midori has shown to be deeply invested in making her imaginative world a reality, but is reigned in by Sayaka to check her expectations in certain moments. Having a creative imagination is good, but not when you decide to lose focus. In an anime production, planning is always involved, whether it be drawing up concept sketches, securing materials and resources, or even finding an event to host your film.

As we observe from Midori’s perspective, her imaginative sketches come to life and open up a whole new world of possibilities and potential. Even though she can be a socially awkward dork sometimes, she knows she can’t do it alone. With Sayaka’s support, she and Tsubame are able to have their own space to start work on production. Tsubame in turn helps Midori with animating character movements that compliment Midori’s overall concept and storyboard background.

As we’ll discuss in the next section, there are always hurdles in the way. Nonetheless, producing any kind of good art takes a good amount of time, energy, and teamwork. Midori, Sayaka, and Tsubame are prime examples of the artistic process in action which brings them one step closer to their goal.

Obstacles Are Always a Given 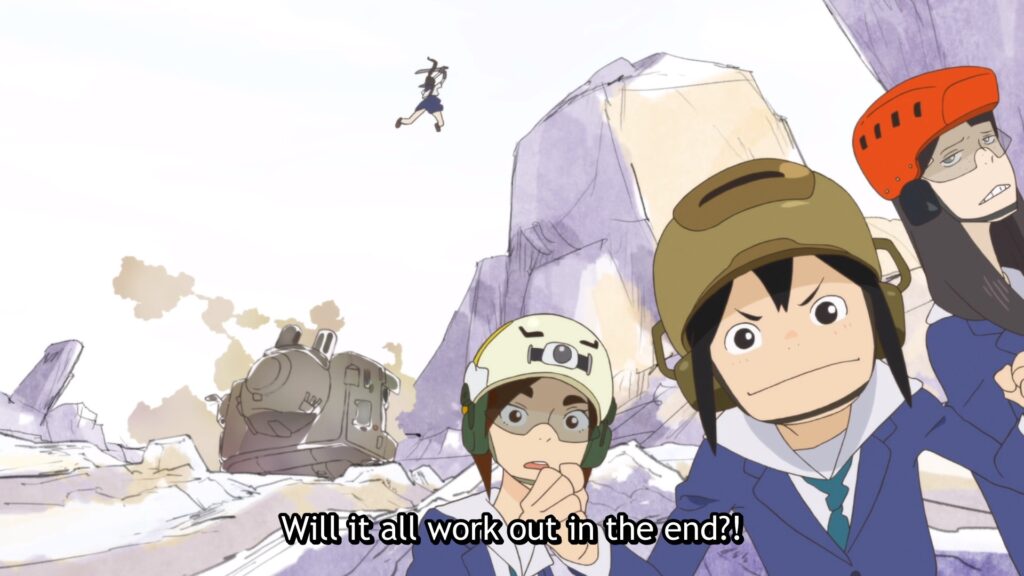 With any kind of artistic project, there are factors that can always hinder the progress. But, with an endless imagination and a strong creative drive, you can feel determined to complete your grand vision. In the case of Eizouken, three high schoolers are determined to finish their dystopian mecha anime to showcase to the entire school.

Outside of the Film Club, the three girls have to go against complicated factors that limit what they can do. Tsubame’s parents strictly prohibit her from being involved in any anime and want her to focus on becoming a world class actress. To avoid being caught, much of what she’s done is in secret, but throughout the show, she learns to accept her creative self and embrace her talents as an animator. In the end, she’s rewarded for her efforts when her parents finally acknowledge the hard work she put into her animation skills at the film’s premiere.

Sayaka has to deal with the logistics of running the club (e.g. finances) and with trying to earn cooperation from other associations such as the Art, Robot, and Audio clubs. A problem always arises from working with people in different departments or clubs. Sayaka gradually learns to troubleshoot these issues to help her team do their jobs better. Not to mention that the student council is on their case, as they believe a film club is redundant for their school and a waste of their budget. Despite their opposition, Sayaka convinces them to keep them active with the promise of a great anime premiere. 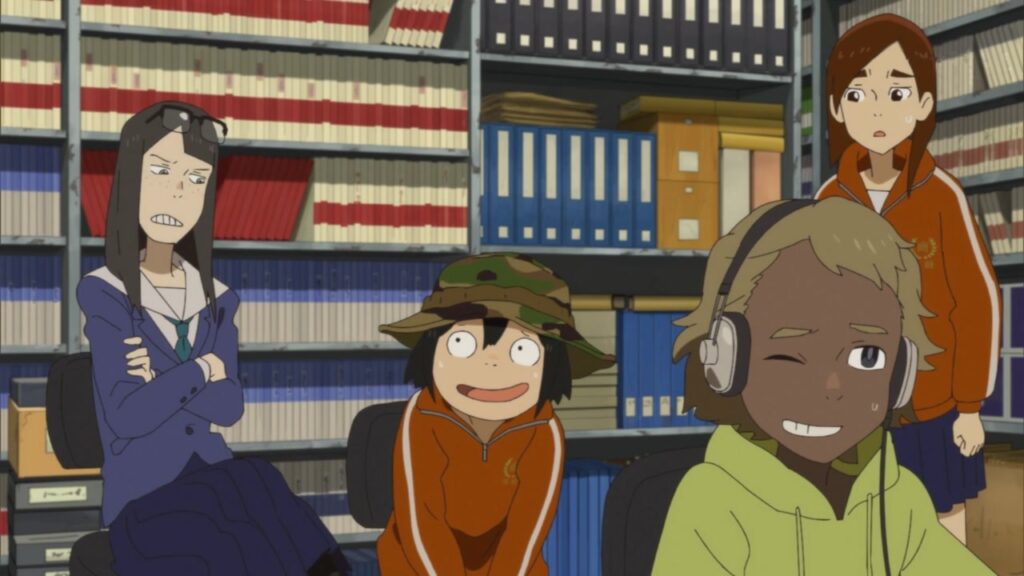 Midori faces more internal problems, often getting stuck or delayed on crucial moments during production. As the director of the anime, nothing will progress if she doesn’t produce the ideas and concepts. With the support of Sayaka and Tsubame, however, she’s slowly able to overcome her artist’s block and tap into that endless well of creative vision. She’s too imaginative to give up on realizing her grand world into an awesome piece of art.

The Final Stroke of Success 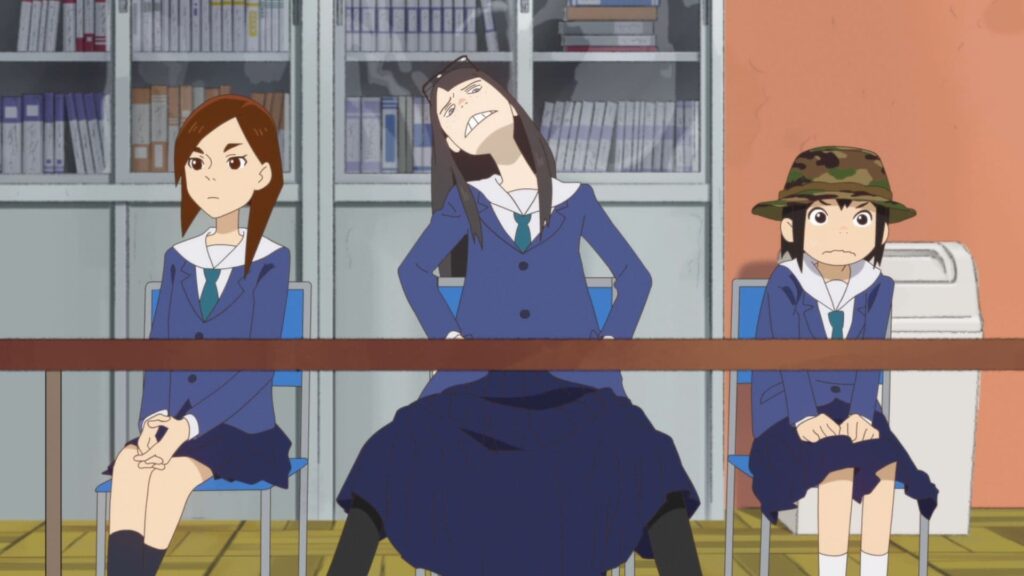 I think the greatest lesson our lead characters learn by the end of their journey is that art is a never-ending process and you always move on to create the next big thing. Perseverance and resourcefulness are other important qualities to the artistic process because you have to put the time and effort into creating your desired art and find ways to inspire yourself if you run into a wall.

This is what makes Eizouken unique and also makes it stand out from other anime. You can see Yuasa’s style and imagination bleed from the animation and art throughout the show. This just proves that when you really put your imagination to work, great things can be created.

Keep Your Hands Off Eizouken! Is currently streaming on Crunchyroll.