A Duck, Slam Dunks And Punks: Ahiru no Sora 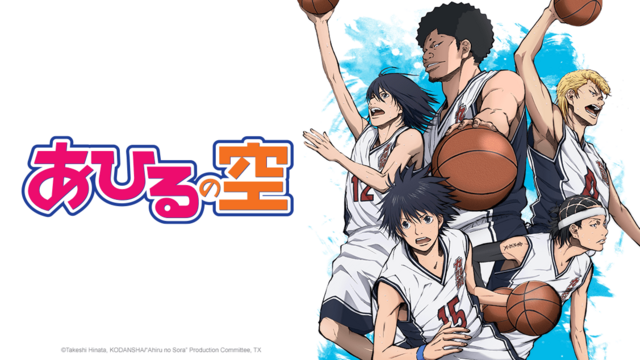 The basketball anime and manga series Ahiru no Sora is an odd duck.   It’s also a unique series which fights hard to rise up above many others.

The Wide World of Sports in Ahiru no Sora

Generally speaking, sports, games and athletes are easy topics for manga, especially shonen manga.  The subject lends itself easily to common, typical and frequent themes that appeal to the core audience.

A sports manga can be about just about any sport, really. The series has to have a team, and that means important lessons about teamwork.  There are difficult, challenging and satisfactory goals to reach — the championship, a tournament or a Big Game against a rival.

Chances are, at the beginning, the players are disorganized, discouraged or just not that good. But, because this is a shonen anime, they will get better.

There are obstacles to overcome, rivals to beat and a lot of training to improve skills and learn new techniques.  It’s a topic almost custom-made for shonen anime — just replace the word “ninja” or “pirate” with “athlete.”

Perhaps because it is so obvious a choice, there have been many, many basketball stories out there over the years —  Slam Dunk, Kuroko’s Basketball, Dear Boys (Hoop Days), Harlem Beat, etc.

So, how does Ahiru no Sora distinguish itself in a crowd?

Sky of the Duck

Let’s start with the title, because at first glance, it sounds like an unusual one — Ahiru no Sora.

Ahiru is duck in Japanese, and Sora is sky.  Of course, Sora is also a boy’s name.  So the name can translate as “Sky of the Duck” or “Sora the Duck.”

It’s not an anime about ducks.  The basketball team is not named the Mighty Ducks (wrong sport).

But duck, bird, sky and flying themes do show up a lot.    The first episode is titled “The Ugly Duckling.”

Other episode titles include “Momoharu’s Wings,” “First Flight,” “Broken Wings,” “the Duck and the Kite,” “Kite, His Ball and the Team’s Pain” and “Higher Than Anyone.”

Of course, basketball players do have to jump high to reach the basket, and the sport features a lot of slang about hang time or “air time.” So flying is an appropriate metaphor.

But the basketball move that our hero, Sora Kurumatani, shows off in the first episode is not a high-flying stunt but a duck-in — i.e., he ducks down low under the competition.  The audience (other students) watching this five-on-one game even comment on how he dives.

Arguably, even the first scene of the anime follows this theme, as we first meet Sora down by the river — someplace where you might find a duck?  There’s a bird in the scene,  which flies symbolically off while Sora is talking to a big guy.

Also, the first opening theme song for the anime is titled “Happy Go Ducky!”   If the opening credits remind you of FLCL, it’s probably because the theme music is by The Pillows, who did a lot of appropriately awesome music for FLCL.

In Slam Dunk, the main character is a former punk delinquent who reluctantly joins a basketball team.  In Ahiru no Sora, the situation is reversed.  Sora’s not a punk, but everyone else is.

Sora is enthusiastic about basketball, and when he enters Kuzuryu High School (“Kuzu High”), he wants to join the basketball team.

But, it seems that the Kuzu High basketball club has gone downhill.  The school requires every student to join a club or team of some sort. As a result, the basketball team has become a home for punks, tough guys and delinquents.

The locker room is a mess. The one useful feature is a peep hole into the girls’ locker room.

Nobody in the basketball club actually wants to play basketball.  Momoharu Hanazono, the leader of the group, even forbids any basketball practice without his permission.

However, Sora is determined to play basketball.  His mother was on the Japan basketball team, and he wants to be a great player like her. Although he is short, he aims to win a tournament.

Momoharu and his gang catch Sora practicing basketball in the gym.   They lock him in the locker room.  Luckily for Sora, they don’t realize that there is another guy in there, who uses brute force to let Sora out.

This guy, Chiaki Hanazono, isn’t motivated to play basketball. But least he doesn’t seem like a thug like the others.  Chiaki is also Momoharu’s brother.

Sora challenges the basketball club to a game.  Since they aren’t interested, he offers to make it five-on-one, which sounds impossible.

Of course he wins, which sets the whole anime into motion. A lot happens over the course of season one.

Among the highlights of the first 31 episodes: Sora slowly convinces the others that they want to play.  They are challenged to a game by a rival school, “Maru” High (Shinmaruko High School).

Kuzu loses the game, but they prove that they are determined.  A new freshman, Kenji (“Tobi” or “Kite”) Natsume, proves to be a troublemaker.  Note:  Kite’s nickname is a reference to the black kite, a bird of prey.

The team gains a club manager, Nao Nanao.  There is a game between the boys’ team and the girls’ team, which features Madoka Yabuchi.

The team has a training camp, and a practice game against Kitasumi High. Eventually, the team makes it to the tournament, where they are challenged by tricky opponents with difficult tactics and strategies.

Of course, a lot happens off the court as well.  There is a lot of character development, as we learn about players’ backgrounds.  There’s room for a lot of humor as well.

There are also potential love interests as well — primarily Nao and Madoka. This gets expanded upon in the manga.

Because this is a sports team anime, it has a huge number of characters.

Other teams are from Kitasumi High, Shinjo Towa Academy and Yokohama Taiei High. 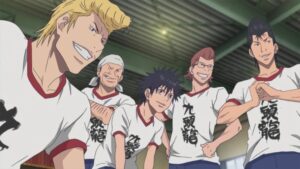 Ahiru no Sora started out as a manga by Takeshi Hinata in 2003.  So far, there have been 50 volumes of the manga.

The manga took a hiatus in 2019, and it appears that it has entered its final story arc.

In October 2019, Ahiru no Sora was adapted into an anime series.  As of May 2020, 31 episodes have been made. At least 36 episodes are expected for the first season.

Given the large amount of manga  printed so far, it seems likely that there is more than enough story material for a second season or more.

The Japanese website for Ahiru no Sora would seem to suggest that a Blu-ray box vol. 4, featuring episodes 37 through 50 will come out in November of 2020.  The page notes that release dates are “subject to change without notice.”