What Is Berserk? Looking at Anime and Manga’s Greatest Epic 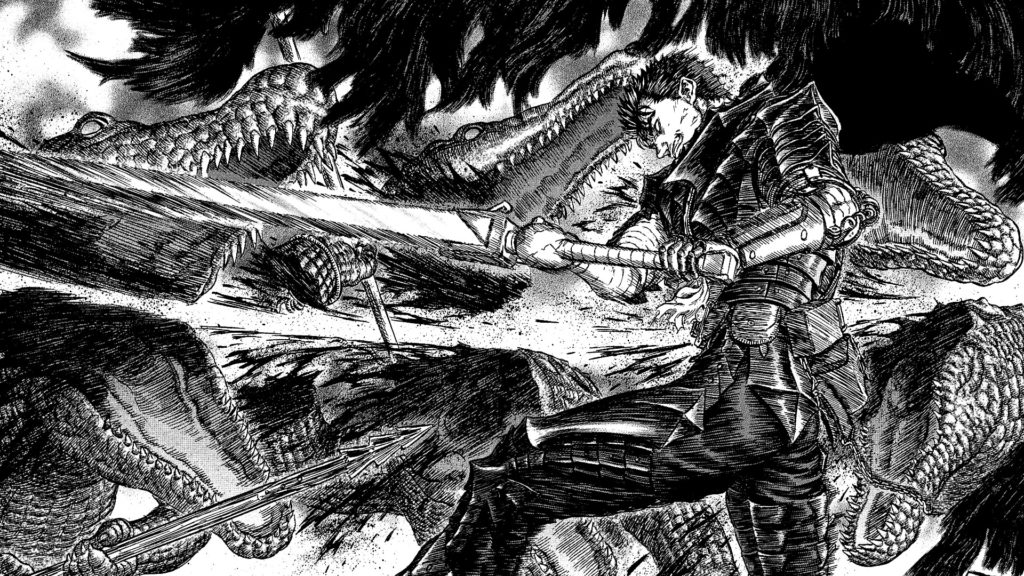 Thanks to the common internet subculture over the last 15 years, the word ‘epic’ has been misused and abused. When people started using it as an adjective synonymous to ‘awesome’, that was still okay, but in time ‘epic’ could mean anything from ‘bacon-flavored Nutella’ to Sheldon from The Big Bang Theory.

Once upon a time, the word was used as a noun to describe long-winded stories and poems that told of exaggerating heroic exploits. Manga’s full of those! Like the nearly 100-volume One Piece or the classic Saint Seiya to name a few… But what comes to mind when pressed to think of which Japanese comic most exemplifies the word? It has to be Kentaro Miura’s Berserk. 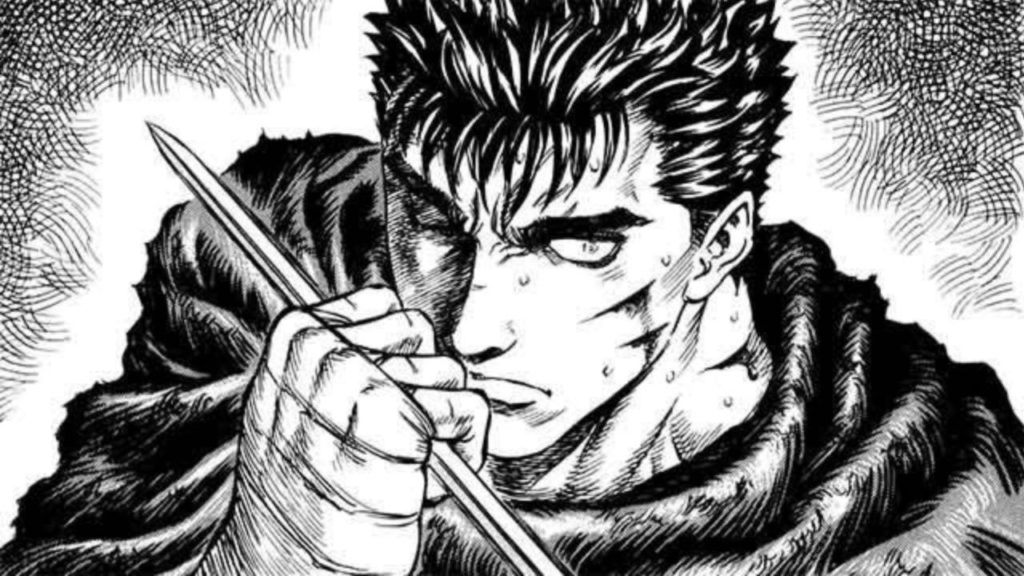 This is the most epic of epic manga, even if the darn comic will never be finished, as Miura has been famously going on and off hiatus for well over 10 years now.

Update: Kentaro Miura has passed away at the age of fifty-four on 20 May 2021

Berserk is epic, in the way we commonly use the word now, but it’s also an Epic. Epics were long-form poems that depicted grand exploits of mythological heroes. In the literary sense, the definition of the word has expanded to include novels or dramas that do the same. I don’t know if you’d call Guts a hero or a do-gooder, but he certainly travels around a fantastical medieval setting slaying oversized monsters and gods, saving lives along the way.

Kentaro Miura first launched Berserk over 30 years ago in 1998, and the manga world still hasn’t recovered from its impact. Miura has some of the most incredible pen-to-paper talents of any manga artist and the horrific world he builds throughout his tale is second to none.

Anyone with an active, vested interest in the medium (whether they’re in America, Japan, or elsewhere) is familiar with the title. A critical and fan favorite, the series has become part of the permanent internet sub-culture much like Neon Genesis Evangelion. Unfortunately though, despite being the ultimate manga epic, it lacks a satisfactory anime.

No anime has ever been able to do the Berserk manga or its fans justice. Animators have brought the comics to life not once, not twice, but on three separate occasions; The classic Berserk (1997), the odd Golden Age Arc Berserk Movie Trilogy, and the horror simply known as Berserk (2016-2017).

We’re not saying that every Berserk anime is bad! In fact, at least two of the three are quite worth watching, but for reasons we’ll get into below, they’re all missing something.

The most recent attempt to animate Berserk (the 2016 / 2017 series), was a critical and commercial failure, and it’s hard to imagine a fourth attempt happening anytime soon. If you’ve read all the manga and you need something to tide you over until the next batch of chapters come out, you might want to give one of these a shot to satisfy your fix. 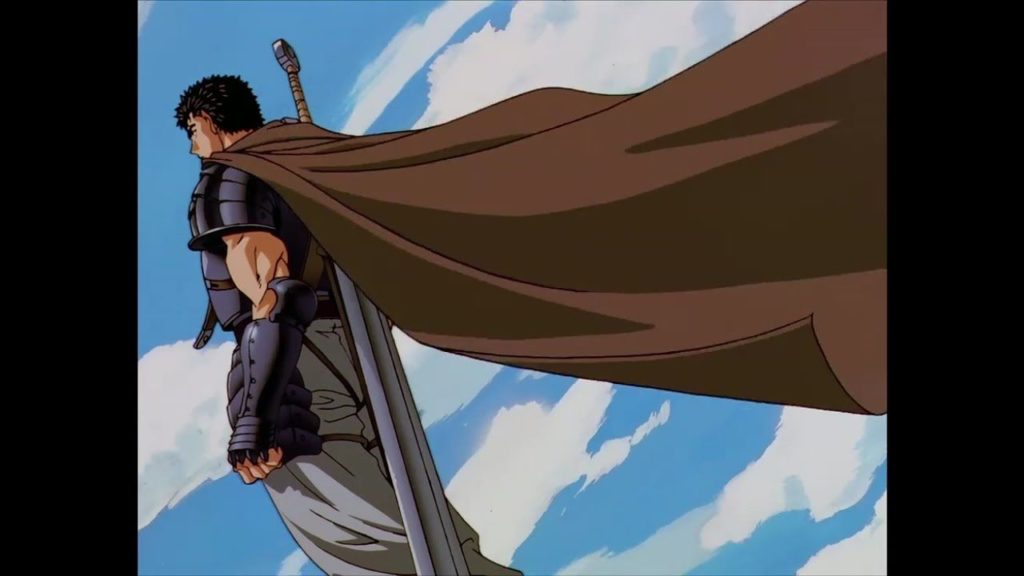 Berserk (1997) is a completely solid adaptation of the manga and on its own stands as a pretty good show! It captures the look and feel of the comic as best as a mid-budget anime can, and only scaled down the degree of violence just enough to get it on air.

Plus, we’d be doing you a disservice if we didn’t mention the awesome soundtrack contributions by Susumu Hirasawa who’s best known for scoring nearly every animation the late great Satoshi Kon made. Seriously, go listen to ‘Forces’ right now. So what’s the problem with this show? Simply that it only covers the Golden Age arc. It’s essentially a prequel to the rest of Berserk that was never followed up.

Maybe it makes sense to watch this show if you’re not sure you want to commit to the 40-volume manga, but otherwise, it ends on a huge cliff-hanger that never gets resolved. 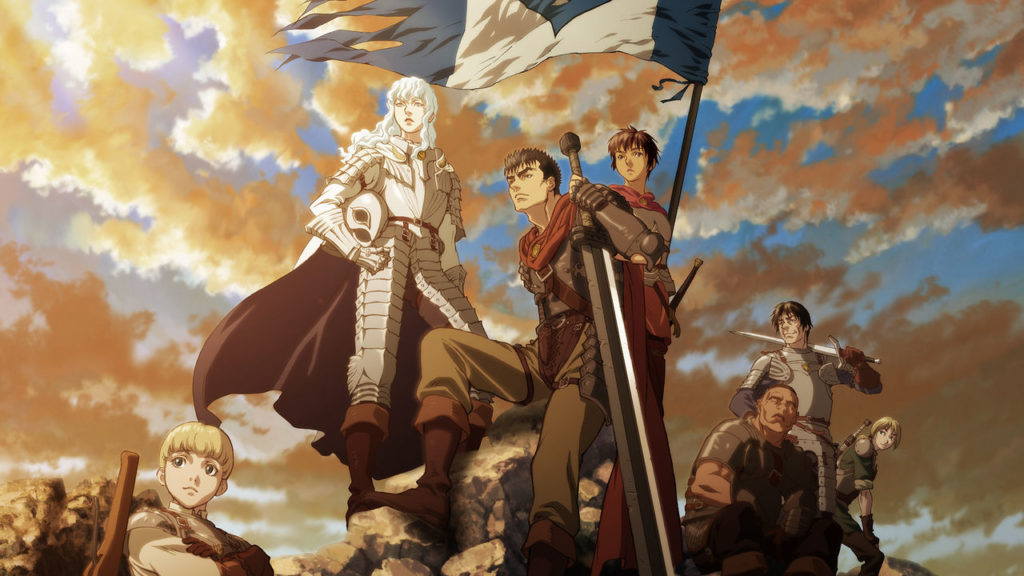 For years and years and years, fans clamored for another Berserk anime. After the first ended in 1998, there was nothing in the works for over a decade until 2010, when the Berserk: The Golden Age Arc film trilogy was announced, eventually coming out in 2012 and 2013. Animated by Studio 4°C, the avant-garde animation behind Tekkonkinkreet and Masaaki Yuasa’s Mind Game, these films are actually pretty good!

It may be a controversial opinion but they’re arguably better than Berserk (1997) despite the weird flipping between 2D and 3DCG animation. At the very least, the way the films portray Berserk’s quintessential ‘Eclipse’ was truly masterful, a marvel to watch on par with the original comic.

So what’s the problem here? The dang films only animated the part of Berserk that the original anime covered and nothing more! In a way, it felt like a slap in the face, but not as much as what came next. 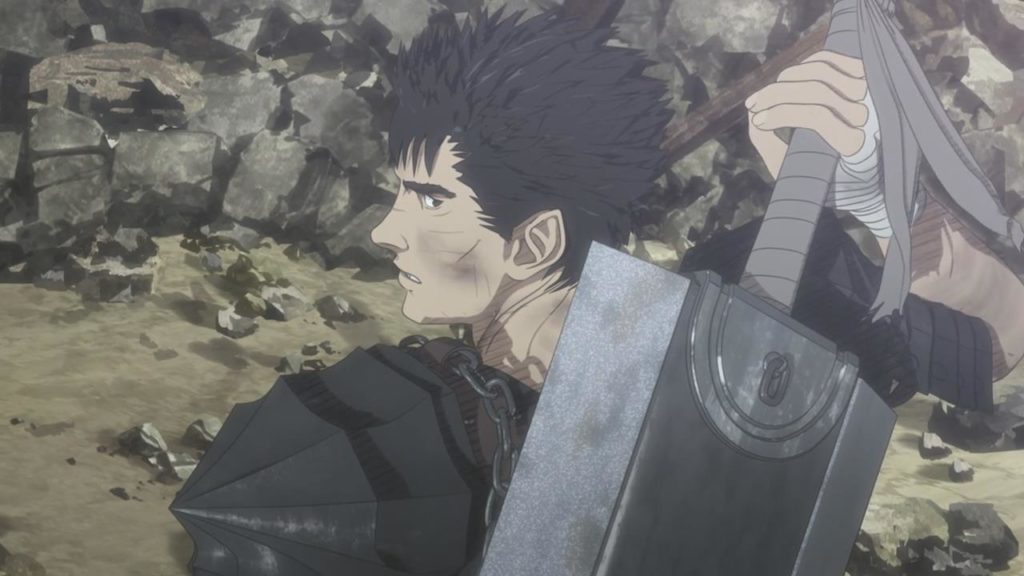 What’s to say about Berserk 2016 / 2017 that hasn’t already been said by its perpetually and rightfully angry audience? Softly billed as the follow up to the Berserk movie trilogy, it was made by entirely different people and seemingly on the cheap.

It sported 3DCG significantly uglier than what had come out nearly five years before it and used some shaders and effects to try to make up for the difference. Plus, there were some weird minor plot changes to unnecessarily make the show its own canon.

Since Berserk (1997), fans wanted to see any part of the manga post ‘Golden Age’ animated but with a show like Berserk 2016 / 2017, we all would have been better off still hoping.

Be careful what you wish for.

Will There Be a Berserk Season 3?

As of now, there’s been no announcement or confirmation of a Berserk Season 3. The 2016 and 2017 seasons weren’t a financial success and the fans hated it. While we can’t know for sure, it’s hard to imagine a continuation of this Berserk. You really should just read the manga at the point if you haven’t. Maybe 10 years from now someone will finally get it right.

The Most Iconic Berserk Characters

Like any good story, Berserk wouldn’t be half as good without a cast of characters who leave lasting impressions. More than most series out there, Berserk runs rampant with people, or specifically not people, that don’t fit any stereotypical molds.

From series mainstays like The Immortal Zodd who, unlike his fellow Apostles, does not overindulge by feasting on humans and instead savors battle to the post-Golden Age crew like Farnesse, who used to be a devout follower of the church but now strives to learn magic to aid Guts and company.

Absolutely everyone in Berserk is worth getting to know and has a surprising amount of nuance to their personality, but there are three main characters this tale revolves around. Let’s break them down. 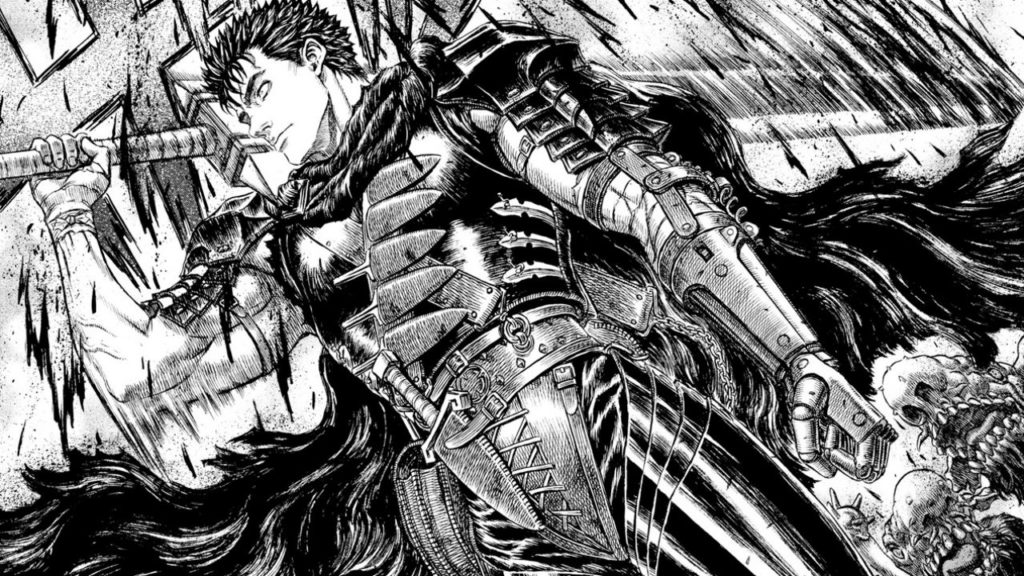 Of course, there’s Guts. Before Kirito from Sword Art Online had the audacity to steal his subtitle, Guts was the definitive Black Swordsman. After surviving a demonic ritual that obliterated nearly his entire group of traveling mercenaries, Guts has wandered the land, silencing a group of ungodly monsters known as Apostles with nothing but his huge slab of iron and the canon built into his hand.

When not battling giant monsters, he’s been known to slay literally 100 opposing soldiers at once. Much as even the image of Shinji Ikari alone has become internet sub-culture iconography, so too has Guts. He’s earned himself a permanent place in the hearts of fans and in the annals of the internet thanks to his constant Anti-Heroic exploits. 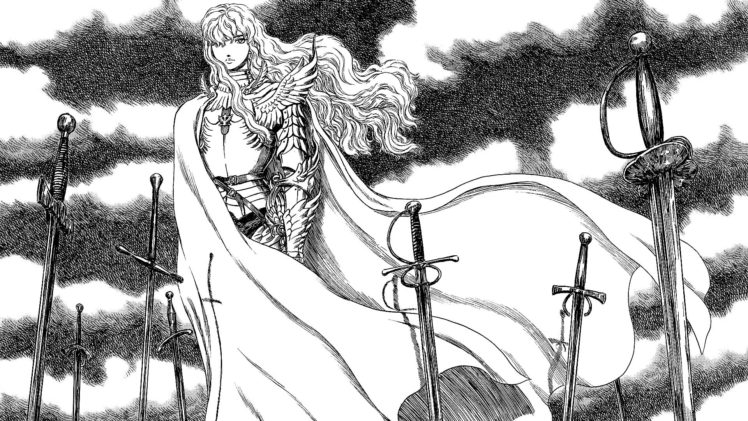 Griffith is the Sasuke to Gut’s Naruto, although to the majority of the world in Berserk, Griffith’s the hero. The White Hawk, The Falcon Of Light, Phemto, Griffith’s got many titles under his belt and only a select few know how low he’s had to go to achieve greatness.

Once Guts’ best buddy, but after Griffith ushered in the Eclipse and killed all of their other comrades, Guts is now on a quest to stop Griffith once and for all. Matters are made more complicated when basically everyone in the world has started following Griffith, who’s become something of a Jesus Christ-like figure. He’s created a new kingdom where all are welcome and has even convinced many Apostles to stop targeting humans.

Griffith constantly makes you weigh the pain of individual evil versus the worth of collective good. Also, a meme now. 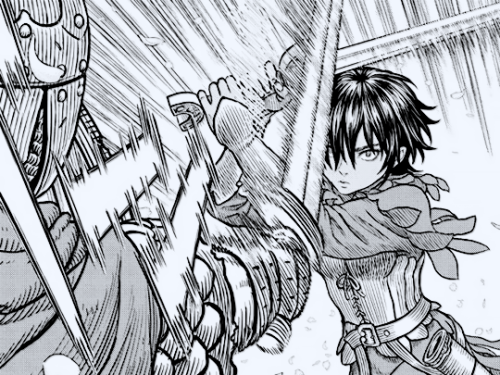 When Griffith was the simple leader of a band of mercenaries and not a living god, Casca was his most devout follower and one of his best soldiers. She’s fierce, she’s strong, and she’s willing to slash your head off. When Guts joined up with the Band of the Hawk, she got jealous Griffith started paying more attention to him than her.

Eventually, Guts and Casca got close… only for Casca to be ravaged through and through during the Eclipse. She survived, but was left a shell of her former self after the event. Aside from killing the Apostles and stopping Griffith, Guts’ biggest immediate goal is trying to restore Casca’s sanity.

What will happen when he does, though? 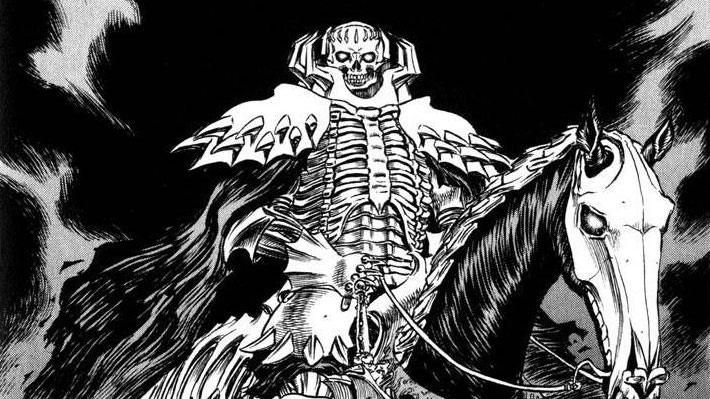 Despite Berserk being 30 years old, still not too much is known about the elusive Skull Knight. There are only a few things we can say for sure, namely that he’s been an enemy of The God Hand longer than Guts, and he has a habit of showing up at the knick of time. He has saved Guts’ butt more than once both pre and post The Eclipse, and the two have formed a kind of understanding as vague allies in the war against the truly horrible. 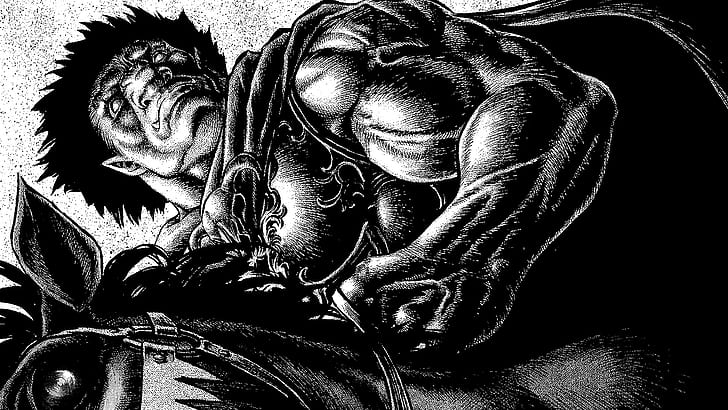 Also known as Zodd The Immortal, Zodd is an enemy of Guts and his team. However, unlike many of the other Apostles they run into over the course of manga’s great epic, he’s out to prove his strength as a combatant. While definitely not a good guy, he doesn’t indulge in feasting on human flesh any more than he needs to, and has even been known to show mercy on rare occasions.