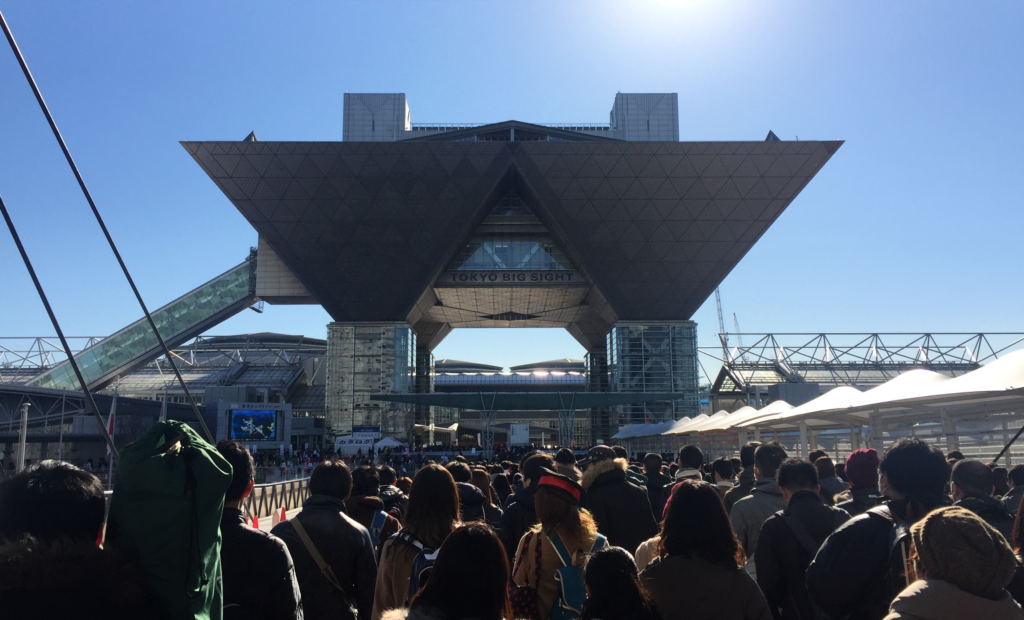 With Comiket 97 coming up at the end of this week, a number of us are making the biannual pilgrimage to the convention with the hopes of seeing some of our favorite independent artists. Known as “circles”, these groups or individuals range from illustrators, musicians, photographers, cosplayers, visual novelists, performance artists, and anything else you could imagine.

What does Comiket stand for?

Short for “Comic Market”, Comiket started as a non-profit grassroots event made by the fans, for the fans. In its 97 iterations since the inaugural year in 1975, it’s held on to this identity and built it’s way up into pop culture legacy. At this point in time, Comiket is the largest non-government non-corporate event, bolstering in excess of 700,000 visitors and 35,000 circles, with a slight exception for 2019 due to spacial limitations. Comiket hosts two events yearly, adequately known as NatsuComi (Summer Comiket) in August and FuyuComi (Winter Comiket) in December leading up to New Year’s Eve.

What are the different days for Comiket?

The circles are all spread across different days, with each day broadly representing a different interest. With a distinct “anime” or “video game” day, and different subsections of genres and source materials grouped together within the venue, fans can plan their trips around which days suit their interests the best before coming to the event. Alongside the independent circles, Comiket also hosts upwards of 190 corporate booths, which can usually be found across all of the days.

What are Comiket circles?

Most of the circles find themselves placed within the aisles but that isn’t the case for some of the more popular vendors. Depending on their popularity circles might be placed around the walls (known as kabe-circles) or, for the highly sought after “shutter-circles”, can be found themselves placed along with the shutters where there is adequate room for hundreds of queueing fans outside the building. The popularity of the shutter-circles is only shared by some of the corporate booths, with the likes of big publishers such as Kadokawa warranting several hour-long lines. A lot of the popular circles sell exclusive items, which tend to resell for ridiculous premiums. It’s commonplace to see doujinshi that were originally priced at 1000-2000JPY to resell at over ten times the price given these circumstances.

What is popular at Comiket?

When to popularity in terms of franchise representation, the Fate/ series has reigned supreme since 2018. Closely following is the previous leader KanColle and Comiket’s homegrown Touhou franchise. Touhou, along with the likes of When they Cry series and others, are some of the examples of beloved franchises that had their humble beginnings as doujinshi (or in this case doujin-soft).

We have a lot of circles we love here at Otaquest, so it’s difficult to recommend all of them. For music, we look towards HARDCORE TANO*C, MEGAREX, Diverse System, Cool & Create, and C.H.S. for the best of what Comiket has to offer. When it comes to illustration there are two categories to look at. First of are the independent illustrators such as Mago, Cogecha, and Najuco who use Comiket to sell their main content. What tends to be the highest priority among many fans is the animator run circles. These circles see some of the top talents in the anime industry sell animation works, design works, and other art as a side-hustle. With legends such as Masami Obari to the beloved Studio TRIGGER run circles such as the central Cemetery Hills High School and more independently-run circles from Saito Kengou, Yusuke Yoshigaki, and Sushio.

Comiket also has a long history of some of Japan’s best cosplayers. Unlike western conventions, cosplayers are not allowed to make their way to the venue in costume, but rather have to get changed on arrival. This is to help smooth out all the existing transit issues caused by the events. Some cosplayers will even sell their own photoshoots as doujinshi at the event. It is important to know that the culture around cosplay is a little more reserved in Japan, and even though it should be common sense Comiket goers should make sure to always ask for permission before taking photographs of the cosplayers (as well as all the other etiquette you would hope for). Since the cosplay time does not run for the whole event, many cosplayers flock to nearby gathering areas and can be found outside the main venue later in the day. It is recommended that you thoroughly familiarise yourself with the guidelines beforehand.

Due to renovations taking place in the east hall of Tokyo Big Sight in the lead up to the 2020 Olympics, a significant amount of floor space has become unavailable for Comiket use. This has lead to a number of new practices, most notably extending the event to four days and charging an entrance fee. The corporate booths have also been moved to the nearby Aomi Exhibition Hall for the time being. Summer Comiket next year (2020) is also being moved to May in order to avoid scheduling conflicts with the Tokyo Olympic Games.

Comiket Entrance Fee: what are the wrist bands for?

The entrance cost for each day is tied to wrist bands, which can be purchased before the event or at the venue itself. The most notable way of obtaining the wristbands is through purchasing their catalog, with the book coming with a wristband for all for days. There is some amount of dissatisfaction among frequenters of the event with the wristbands being tied to the base version of the catalog, as the ever-convenient physical and digital package of the book does not come with a set of wrist bands.

The wrist bands and catalog can be purchased at most popular anime chains across Japan such as Animate, Melon Books, or Toranoana. The catalog has a store price for 2500JPY, or 2000JPY if you pick it up at the venue. Likewise, individual wristbands are 540JPY in-store or 500JPY one site. If you plan to get to the event early, we recommend getting the wrist bands in store before the day of the event in order to save yourself time and hassle in those critical first minutes.

Unfortunately, doujinshi and by extension Comiket get a bad wrap for being mostly pornographic. This is a misconception. While admittedly there is a large volume of pornography published through doujinshi, Comiket is filled with aisles of nonpornographic fanworks and original content alike. Like us here at Otaquest, many people make the pilgrimage in search of exclusively non-pornographic content.

Comiket is no stranger to having a few hiccups along the way. In 1989, the event’s reputation took a big hit after known otaku spree killer Tsutomu Miyazaki’s case was headlining Japanese news. In 2012, Comiket received a threat inciting violence against all venders of Kuroko no Basket goods, causing the event to cancel and reimburse roughly 900 circles who were all at risk. As further compensation, Comiket held an additional event at a later date, serving as an exclusive comic market for all Kuroko no Basket related vendors.

There is one stereotype for Comiket that very grounded in reality, and that is its monstrous lines. On any particular morning, fans can be seen by the tens-of-thousands waiting hours to get into Tokyo Big Sight. Unlike its spiritual American counterpart in Anime Expo, the majority of waiting is done in lead up to the doors opening as fans want to get in as early as possible, rather than it being due to bad organization. Once the lines start moving, the wait is far more reasonable than you would expect, even if you are towards the back. Considering the mass of people trying to get in this is no small feat. Comiket as an event is incredibly organized compared to many of its loose overseas counterparts. No seven-hour long single-file lines to be seen around Odaiba.

We’ll be on hand each day of Comiket 97 this year on the hunt for the coolest goods from both independent circles & major publishers alike. Stay tuned for daily coverage of the event here at Otaquest to get even more of an idea of what to expect should you want to make the pilgrimage yourself.